It was there that Soni said he figured out one of the most annoying pain points for doctors in any office: writing down notes and documentation. That’s why he decided to start Suki — previously Robin AI — to create a way for doctors to simply start talking aloud to take notes when working with patients, rather than having to put everything into a medical record system, or even writing those notes down by hand. That seemed like the lowest hanging fruit, offering an opportunity to make it easier for doctors that see dozens of patients to make their lives significantly easier, he said.

“We decided we had found a powerful constituency who were burning out because of just documentation,” Soni said. “They have underlying EMR systems that are much older in design. The solution aligns with the commoditization of voice and machine learning. If you put it all together, if we can build a system for doctors and allow doctors to use it in a relatively easy way, they’ll use it to document all the interactions they do with patients. If you have access to all data right from a horse’s mouth, you can use that to solve all the other problems on the health stack.”

The company said it has raised a $15 million funding round led by Venrock, with First Round, Social+Capital, Nat Turner of Flatiron Health, Marc Benioff, and other individual Googlers and angels. Venrock also previously led a $5 million seed financing round, bringing the company’s total funding to around $20 million. It’s also changing its name from Robin AI to Suki, though the reason is actually a pretty simple one: “Suki” is a better wake word for a voice assistant than “Robin” because odds are there’s someone named Robin in the office. 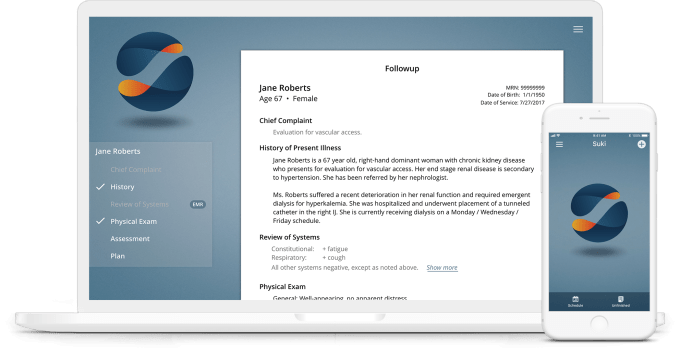 The challenge for a company like Suki is not actually the voice recognition part. Indeed, that’s why Soni said they are actually starting a company like this today: voice recognition is commoditized. Trying to start a company like Suki four years ago would have meant having to build that kind of technology from scratch, but thanks to incredible advances in machine learning over just the past few years, startups can quickly move on to the core business problems they hope to solve rather than focusing on early technical challenges.

Instead, Suki’s problem is one of understanding language. It has to ingest everything that a doctor is saying, parse it, and figure out what goes where in a patient’s documentation. That problem is even more complex because each doctor has a different way of documenting their work with a patient, meaning it has to take extra care in building a system that can scale to any number of doctors. As with any company, the more data it collects over time, the better those results get — and the more defensible the business becomes, because it can be the best product.

“Whether you bring up the iOS app or want to bring it in a website, doctors have it in the exam room,” Soni said. “You can say, ‘Suki, make sure you document this, prescribe this drug, and make sure this person comes back to me for a follow-up visit.’ It takes all that, it captures it into a clinically comprehensive note and then pushes it to the underlying electronic medical record. [Those EMRs] are the system of record, it is not our job to day-one replace these guys. Our job is to make sure doctors and the burnout they are having is relieved.”

Given that voice recognition is commoditized, there will likely be others looking to build a scribe for doctors as well. There are startups like Saykara looking to do something similar, and in these situations it often seems like the companies that are able to capture the most data first are able to become the market leaders. And there’s also a chance that a larger company — like Amazon, which has made its interest in healthcare already known — may step in with its comprehensive understanding of language and find its way into the doctors’ office. Over time, Soni hopes that as it gets more and more data, Suki can become more intelligent and more than just a simple transcription service.

“You can see this arc where you’re going from an Alexa, to a smarter form of a digital assistant, to a device that’s a little bit like a chief resident of a doctor,” Soni said. “You’ll be able to say things like, ‘Suki, pay attention,’ and all it needs to do is listen to your conversation with the patient. I’m, not building a medical transcription company. I’m basically trying to build a digital assistant for doctors.”