Lime, the transportation company now formerly known as LimeBike, has partnered with Segway to launch its next generation of electric scooters. These scooters, which are set to debut mid-month in San Francisco, will supplement Lime’s existing fleet. Lime has also hit three million rides across its fleets of bikes and scooters.

For style-conscious consumers, there won’t be much of a need to worry about looking like a loser. These Lime scooters built in partnership with Segway look nothing like the style of Segway many of us have in our minds.

These Segway-powered Lime scooters are designed to be safer, longer-lasting via battery power and more durable for what the sharing economy requires, Lime CEO Toby Sun told TechCrunch. Now, instead of a maximum distance of 23 miles or so, Lime scooters can go up to 35 miles.

“A lot of the features in the past on scooters were made for the consumer market,” Sun said. “Not for the shared, heavy-duty markets.”

Lime, along with its competitors Bird and Spin, all ultimately rely on Ninebot, a Chinese scooter company that has merged with Segway. Ninebot is backed by investors including Sequoia Capital, Xiaomi and ShunWei.

At this point, Lime’s partnership with Segway is an open one, Sun said. That means Segway could more explicitly partner with Bird and Spin if it wanted to.

The electric scooter space has been under scrutiny as of late — partly due to the fact that Bird, Spin and Lime deployed their respective scooters without explicit permission in San Francisco back in March.

As San Francisco and other markets look to regulate scooters, as well as bike-share programs, one topic of concern that comes up pertains to the docked versus dockless format. And within the conversation around the dockless format, there’s a debate between lock-to versus free-floating. 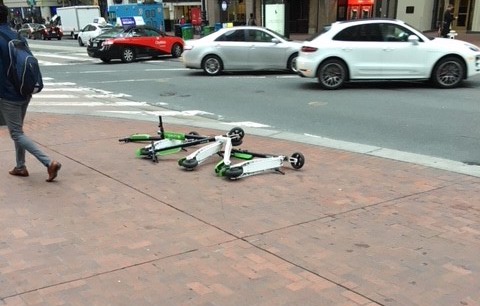 Lime scooters tipped over on the streets of SF. Photo via SF City Attorney Dennis Herrera

What Lime offers across both its bike and scooter-share programs is a dockless, free-floating model. Although there have been issues with this free-floating model in China — resulting in a plethora of abandoned bikes — Sun believes this model is good for the long-term. What it comes down to, Sun said, are the limitations of the lock-to model.

“If we want to manage something at scale, if everything were lock-to, I think there would be infrastructural challenges,” Sun said.

That is, there are only so many bike racks and poles for people to lock their scooters and bikes. Still, there needs to be education around the free-floating model, Sun said.

“The biggest challenge in the future is people who are not familiar with the model,” Sun said.

Down the road, Lime envisions utilizing augmented reality to help people know where to park their bikes and scooters. For example, Sun said, the app could project a virtual box or poles on the ground to show where to place the bike or scooter.

“A virtual parking pole doesn’t require a bike or scooter locked to that pole,” Sun said. “But by putting one or two poles to frame an area, that can help us guide people to that area.”

Additionally, this free-floating model ensures that Lime can deploy its scooters and bikes in traditionally underserved areas.

“We aspire to be a mobility platform that solves the first and last-mile problem,” Sun said.