Rip Pruisken waffled in college (we got that pun safely out of the way for now). He was a student in the Ivy League at Brown University, and had focused on academics for much of his life. His parents were physicists, and “I thought I would study some sort of cookie-cutter path of studying something that I would use post-college,” he explained. “I didn’t really consider entrepreneurship to be a viable option because I was still in that frame of mind.“

It was during a study trip to Italy that he had an epiphany. He was inside an Italian bookstore looking through business books when he suddenly realized that he had discovered a new passion. “If you can build stuff at a profit, you can build more stuff, and how cool is that? That was my aha moment,” he said.

Being an entrepreneur was one thing, but it wasn’t clear what Pruisken should sell. He had grown up in Amsterdam, where he used to eat stroopwafel, a snack composed of two thin waffle pastries melded together with a syrup center. During his freshman year, he had brought over a large quantity of them to school, and “all of my friends devoured them.” Remembering their popularity, “I literally started making them in my dorm in college, and started selling them on campus” during his junior year. 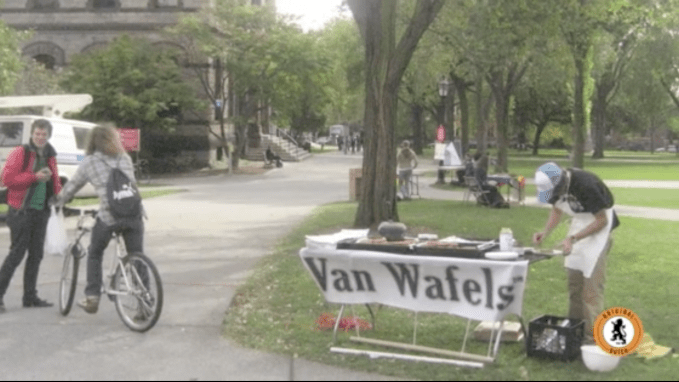 That was 2010. Today, Rip Van Wafels can be found in 12,000 Starbucks locations, and is a popular snack at tech companies, with some larger companies going through tens of thousands of units a week.

Their popularity comes from the intersection of a number of food trends. The snacks are made with natural ingredients and are healthy, with low calorie counts and limited sugar. Perhaps most importantly, they taste great, with different flavors that are designed to strike different moods (a chocolate wafel can work as dessert, while the strawberry wafel feels more like breakfast). The company currently produces eight flavors.

While the startup food company has had tremendous success, none of this was planned a decade ago when Pruisken got started. He worked with co-founder and co-CEO Marco De Leon, who was two years behind Pruisken at Brown University and was a good friend from Brazil looking for a change of pace from his Morgan Stanley internship.

They spent two years on campus trying to improve product marketing and the quality of the snack, which in hindsight was an important iteration process with what would become the company’s core consumer: well-educated and health-conscious tech workers.

The two stumbled into their market and stumbled into their name. “It started as Van Wafels,” Pruisken explained, “and we got a cease and desist letter from Van’s,” which makes frozen food waffles among other products. A professor suggested Rip van Winkle, and that inspired the company’s current name. Pruisken himself was so enamored with the brand he changed his own name — Abhishek, which he had grown up with in Amsterdam — to Rip.

After much work, the two founders discovered that a tech company was particularly enjoying the snacks. “We realized we found this insight that one of our customers in the northeast was a tech company, and we talked to them and they said that it was the perfect treat that was an alternative to a candy bar,” he explained. So Pruisken borrowed the couch of his brother and started going door-to-door selling these Euro snacks to every tech company he could find, eventually 80 of them in one summer.

As he sold wafels, the same pattern would hold up. An order for one case would become two cases, and then 10 and then 20 of them. Eventually, word-of-mouth and distributor partnerships got the snack into the mini-kitchens of dozens of tech companies in San Francisco, as well as in Peet’s Coffee, Whole Foods, and ultimately Starbucks.

Pruisken believes the company’s success has come from iterating on the snack much as a software engineer might fiddle with JavaScript. “We have been reinventing our product every two years,” he said. “We are trying to make our product healthier while providing this very indulgent taste.” That includes experimenting with new ingredients like tapioca syrup and chickpea powder that can provide better nutrition at reduced sugar levels.

He sees the future of the company much the same way. “You can only cut the cycle time down by so much even if you do everything in-house. There are certain components you need to source like certain ingredients or packaging film,” Pruisken explained. “The way to get ahead is to plan way ahead. So work on the things you want to launch in two years right now.” That includes a number of new flavors, as well as potentially adding products that touch on the brain-enhancing nootropics space.

Ultimately, Pruisken wants to redefine the category of packaged foods. “Convenient foods have been associated with being cheaper, lower quality and generally unhealthy in the US,” he said. “I think it would be great if these foods could be elevated.” From a foreign food in a Brown University dorm room to redefining the products on every grocery store shelf, stumbling has paid off for Rip Van, which is taking over the world one wafel at a time.