With recent changes, Flipboard has been placing a big emphasis on allowing readers to go deep on their interests. Now it’s adding even more features around one particular interest, in the Technology section of the Flipboard website and app.

This positions Flipboard as more of a direct competitor to a tech news aggregator like Techmeme, but with more curation from partners and from readers themselves.

The most immediately noticeable change is what the company describes as a “newspaper-like, high-density layout.” Basically, it moves away from the image-heavy look that Flipboard is known for, towards a layout that places a bigger emphasis on headlines and text, designed for quick scanning.

While McCue said the new look is “really meant for the desktop,” Flipboard has also created a version for the mobile web, and the app will also vary between a high-density and low-density layout depending on the stories. (If it seems strange for Flipboard to be prioritizing its web experience, remember that the company has also been shifting its focus away from its own native article formats toward the mobile web.) 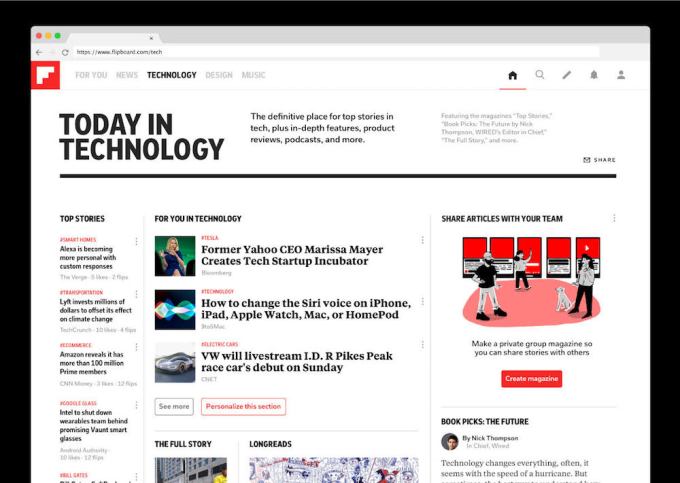 Regardless of which layout you’re seeing, the section will also have new content. Some of it will be curated by Flipboard publishers, with The Verge creating roundups for Gadgets News and Artificial Intelligence, the Wirecutter offering Deals of the Week and the team here at TechCrunch curating our latest Features.

“Flipboard has really become more of an ecosystem,” McCue said. “Publishers and curators are curating stories around all sorts of different topics. We want to provide access to that ecosystem on any platform, with or without the app.”

Teams can also create their own magazines, which are basically private collections of stories. So if you’re at a startup and want all of your colleagues to be up-to-date on the latest headlines about your industry and competitors, you can curate a magazine that’s only visible to them.

And all of this will be rounded up in a daily email, which will include the latest tech headlines as well as selections from any team magazine to which you contribute. On Saturday, the newsletter will focus on those book recommendations, with links to buy the titles on Amazon.

McCue suggested that if all this new content is embraced by readers, we might see Flipboard start to pursue a similar strategy around other topics, with a focus on reaching professional readers. Next up: Advertising.