A former streaming industry exec and an AI specialist walk into a bar… they leave starting an AI company for the music industry.

That’s not exactly how Singapore-based startup Musiio was formed, but it’s close enough — and the outcome is the same.

Co-founders Hazel Savage, formerly of Pandora and Shazam, and Swedish data scientist Aron Pettersson connected at Entrepreneur First in Singapore. The program began in London as a way to help like-minded tech connect with the potential to start projects, so it does mirror the serendipity of meeting new friends in a bar.

“We’d probably never have met each other if we hadn’t gone to EF,” Savage told TechCrunch in an interview.

Brit Savage was looking for new ideas after work brought her and her husband to Singapore, and after crunching through some problems that need fixing, the duo settled on an AI service that helps music platforms tackle content and curation.

Personalization has been the big push for music streaming giants. The initial face of the streaming revolution was based on giving users instant access to millions of songs in a single place, removing the pain of downloads and paying per song. Now that streaming is established, the puck has moved to smarter solutions that help music streamers shift through those tens of millions of songs to find music they like, or, better yet, discover new tracks they’ll love.

Spotify has moved on this in a major way. Aside from consumer products such as Discovery Weekly, a playlist that pulls in a weekly selection of music tailored to a user, it has invested considerable resources in making its product smarter. That’s including acquisitions such as music intelligence company Echo Nest for $100 million, and smaller AI startup Niland, which helps make recommendations and search results smarter. Spotify has also ramped up its internal hires, too.

While Spotify, which recently went public in an unconventional listing, might be the most visible company in need of smarts for music, it is not the only one by far. And we’re not even talking about direct rivals like Pandora, Apple Music, Google and co. Others involved in the less visible — but hugely lucrative — parts of the industry that also need help pouring through millions of tracks include labels, which filter through talent on a daily basis, and agencies that pick out music for brands, advertising, media, etc. 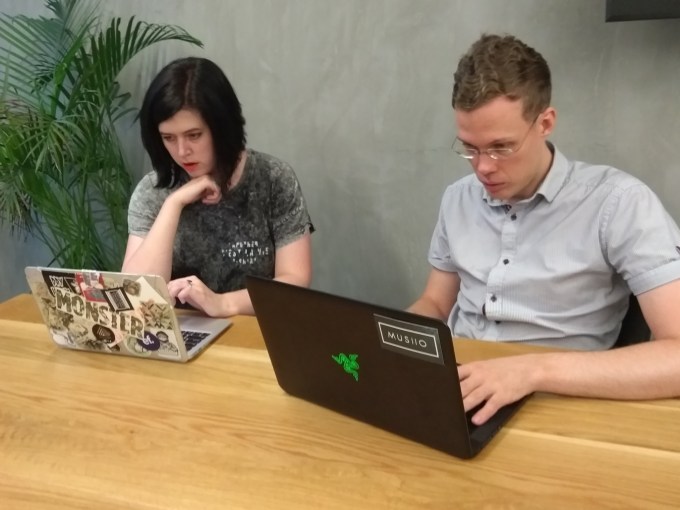 That’s the focus for Musiio, which is aiming to use AI to help those without the spending power of Spotify to automate or partially automate a lot of the heavy lifting when it comes to scouring through music.

“Musiio won’t replace the need to have people listening to music,” Savage told TechCrunch. “But we can delete the inefficiencies.”

The AI uses a combination of deep learning and feature extraction, the latter of which Musiio said allows it to identify and understand patterns and features of a track. The training is focused on the audio itself, rather than stats and data from third-parties, which some services use to categorize tracks. Pettersson runs the AI. For what it’s worth, he cut his teeth with an algorithm for the Swedish stock market that netted him a 28 percent annual return for eight years.

As an example of Musiio’s AI potential, Savage points to previous roles where she has observed music curators assigned piles of music as high as 1,300 tracks each day.

“That’s more than a day’s work!” she said. “It probably takes four days to tackle and then you are three days behind. Plus, the average person loses the ability to be efficient after about the first 20 tracks.”

Musiio wants to help take the burden by using AI to pick out the “best” tracks, thus significantly cutting down the list of tracks to listen to.

“Our systems can listen to 1,000 tracks inside four hours, after which we can give a smaller selection. For labels, that can help them be more efficient, increase hit rate and spend more time with artists helping to develop them,” Savage said.

“Artists and repertoire (A&R) divisions have billion-dollar budgets, for every artist they spend maybe $2 million on development. We think we give them a better guarantee of success using AI, and [from early conversations with labels] they are very interested,” she added.

Musiio said it is developing solutions for a number of undisclosed clients, but one public name it is talking up is Free Music Archive (FMA), a Creative Commons-like free music site developed by independent U.S. radio station WFMU. The site offers legal audio downloads that are particularly popular with filmmakers, nonprofits, podcasters and remixers.

The site has more than 120,000 tracks, each of which is hand-selected, but with just one part-time developer the curation side is lacking. That’s where Musiio is hoping to help make a difference. The startup has begun working with FMA to develop AI-based playlists in a project that doesn’t generate revenue but is “a lovely example of what the tech can do,” says Savage.

“Not only are we backfilling the Echo Nest partnership [after Spotify closed the service following its acquisition] but the lead track in the inaugural playlist (Kurt Vile, ‘I Wanted Everything’) had received 3,000 plays when we found it, after eight years in the database. Two days later after being playlisted by our AI, it had 6,000 plays. We are pretty excited that AI can have that kind of impact,” she explained.

The Vile track is now closing on 10,000 plays two weeks after the playlist was published.

For now, the playlists are created and held within Savage’s FMA account, but Musiio confirmed that it is considering the potential to develop a dashboard that would allow listeners themselves to use the AI to develop playlists. That’s already part of what it is building for other clients.

Funding-wise, Musiio has taken SG$75,000 ($57,000) as part of its involvement in Entrepreneur First. The startup will be part of the EF demo day in July, but Savage said it has already begun to have conversations with investors with a view to raising a seed round of funding.