Can Artificial Intelligence replace lawyers? Perhaps sometime in the distant future, but in the meantime AI is already augmenting the work done by legal professionals as startups race to reach that ultimate goal.

One burgeoning player in the AI-powered legal tech space is Tel Aviv-based LawGeex, which has developed automated contract review technology to help companies sift through things like NDAs, supply agreements, purchase orders, and SaaS licenses, to ensure they’re aren’t any unsanctioned legal gotchas buried deep in legalise. Today, the company is announcing that it has closed $12 million in new investment.

Led by VC fund Aleph, with participation from previous backers, including Lool Ventures, the new round of funding will be used by LawGeex to further develop its product, and build a bigger presence in the U.S. where it recently opened a New York office. It brings the startup’s total funding to date to $21.5 million.

Designed to answer the question ‘Can I sign this?’ the LawGeex contract review system aims to significantly speed up and cut costs inherent with the contract approval process. The idea is that once a new contract is sent to a business, it is uploaded to LawGeex where a “first-pass review” of the contract is undertaken using the startup’s AI. This checks the contract against a company’s predefined legal policies.

“If everything looks good, we can automatically approve the contract for signing right then and there,” explains LawGeex VP Marketing Shmuli Goldberg. “If we spot any issues that need to be corrected, we escalate the contract to the legal team, and highlight the exact sentence they need to fix, and what they need to do to fix it”.

The desired outcome is that legal professionals no longer need to spend time reviewing problem-free contracts, and only spend a few minutes, instead of hours, on problematic ones. “We free up the time of whoever does that first review of the contract, be it a paralegal who takes a first look before sending issues on to a lawyer, or a contract review team who triage incoming contracts,” Goldberg says. 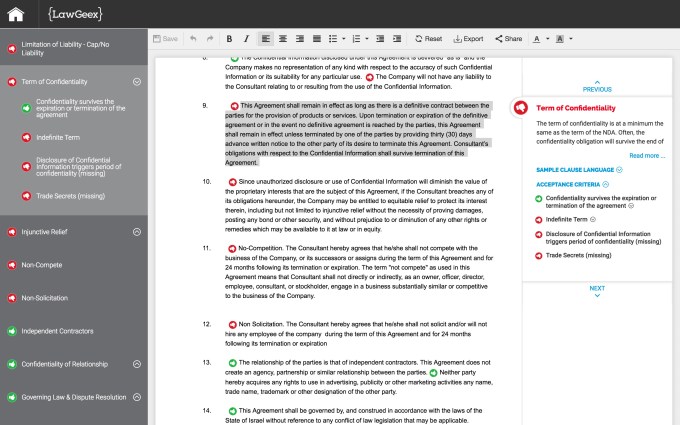 Put more simply, the LawGeex product operates a little like a spelling or grammar checker (see screenshot above). But instead of looking for specific keywords or language, the AI has been trained to understand technical legal language or so-called legalese. “It actively reads the contracts and “understands” the legal concepts. This means we can find and flag provisions even if they’re written in a way we’ve never seen before,” says the LawGeex VP.

To make all of this possible, over the last four years the company’s “recursive neural network”-based AI has been trained by feeding it hundreds of thousands of legal contracts, and having experienced U.S. lawyers annotate those contracts along the way. “We’ve now reached the point we can say that in certain cases, for example reviewing standard NDAs, our AI is actually more accurate than a human, as a recent study led by several academics at leading universities showed,” claims Goldberg.