Just last quarter Netflix passed a $100 billion market cap — and we might already be talking about it as a $150 billion company before too long with yet another big financial quarter that sent its stock soaring.

With all this, Netflix now has nearly 119 million paid streaming memberships — and it wasn’t all that long when Netflix finally said just over two years ago that it would begin opening up in hundreds of new countries internationally. The company’s shares are up around 6% in extended trading, sending its market cap up north of $140 billion. And all this subscriber growth, too, comes before we’re seeing a new tie-up with Comcast’s cable subscriptions that may end up driving that even more. As usual, Netflix expects to lose a ton of money and says it expects between -$3 billion to -$4 billion in free cash flow, but that’s usually not what investors are looking for. 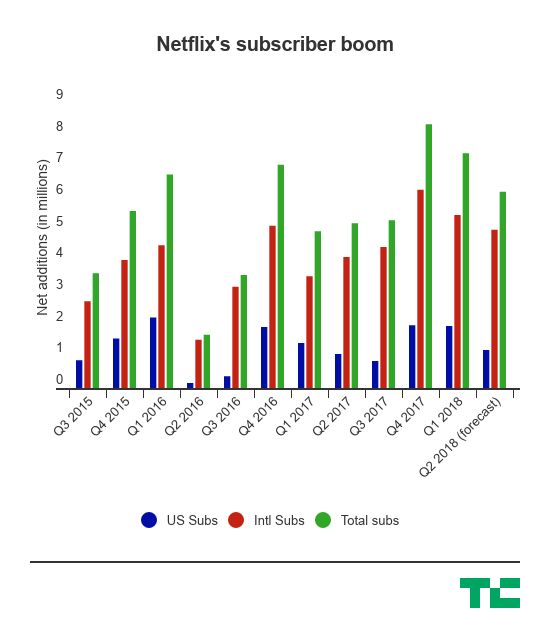 One of the big questions Netflix still has right now is what kind of price tag it will carry as a tack-on to a Comcast subscription. Earlier this week, the companies announced that Comcast would bundle Netflix in to its cable subscriptions, offering yet another entry point for Netflix to ferret up potential consumers that haven’t quite cut the cord yet but still might be interested in Netflix’s content. Netflix normally carries a price tag of around $13.99, but the companies have not said what its price will be as part of a cable bundle yet.

Following Netflix’s last earnings report — which it, as you might expect, included some blowout subscriber numbers — the company rocketed past a market cap of $100 billion. Since then it’s only been an upward trend for Netflix, which prior to its first-quarter report was worth more than $130 billion. Despite increasing spend on original content, that subscriber number is still mostly where it gets its market value because it’s a forward predictor of its revenue.

But it has to continue to invest in original content because it is a way to attract new subscribers, and also because it’s content that it can more easily distribute across different geographies and itself has control of the rights and what happens to it. It relies on shows like Stranger Things or Altered Carbon to bring in new users, which then hopefully stick around and eventually help recoup the cost of those shows — and then the cycle starts anew.