Bloglovin’ has a new name, new funding and a new CEO: Kamiu Lee, who previously served as the company’s vice president of strategy and business development.

“Activate, from a commercial standpoint, is what represents who we are today,” Lee told me.

At the same time, she said the company will continue to support the Bloglovin’ product, which allows readers to find and follow fashion bloggers. The two sides of the business are tied together because it’s “a way for these creators to get discovered, and so it continues to be an audience development tool … for them.”

Lee told me she’s actually worn a number of different hats at Bloglovin’ since joining four years ago as the company’s first monetization-focused hire. With her experience across the company and her current focus on business and strategy, she said it seemed like a “natural step” to take the lead for “the next stage of the company.”

Meanwhile, Bloglovin’s outgoing CEO Giordano Contestabile will remain involved as a board member and advisor. 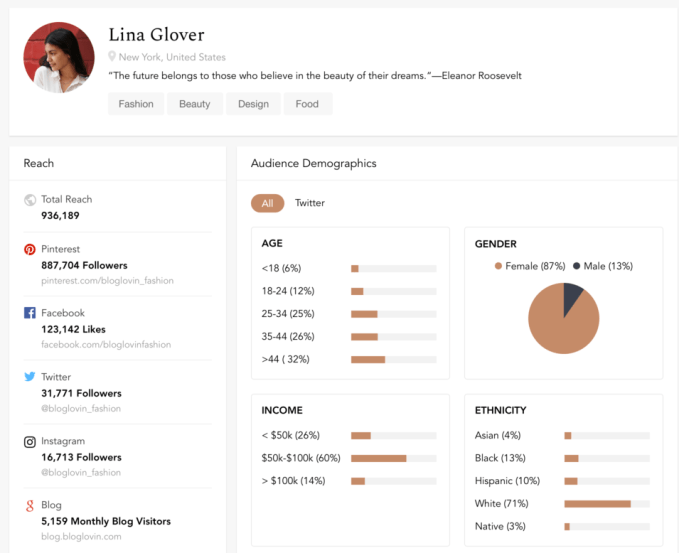 Lee acknowledged that Activate faces plenty of competition from other influencer marketing companies, but she said its approach is distinguished by the richness of its data (Activate isn’t just scraping public data but also getting direct access to the influencers’ own analytics), as well as its “real care for the content and the influencers.”

“It’s really easy to completely cater to the brands, and to a certain extent, if the dollars are there, the influencers will follow,” Lee said. “But in order to be really sustainable, you need great content, and you need to really understand the influencers.”

She also pointed to the size and breadth of Activate’s influencer network — it’s worked with 75,000 influencers to create 6,500 pieces of content per month over the past 12 months. This allows brands to create campaigns that combine content from, say, a single top tier influencer, 15 mid-tier influencers and 100 micro-influencers.

Activate is also launching a new service called Activate Studio, which supplements its existing self-serve product by supporting brands that don’t have large social media teams of their own, helping them develop and manage their influencer marketing strategy.

On top of its other news, the company has also raised an undisclosed amount of new funding from Northzone.

“Within the marketing and advertising industries, we see the incredible value to be captured by influencer marketing,” said Northzone’s Par Jorgen Parson in a statement. “Activate’s unique relationship and dedication to their influencers and industry-leading expertise make them an obvious front-runner among companies competing in the space.”