Instagram is one-upping Apple with a portrait mode feature that runs on a wider variety of phones and works with video, not just photos. Last month, TechCrunch reported about a Focus feature buried in Instagram’s code, which began publicly testing a week later. Now Instagram is rolling out Focus, which blurs the background while keeping someone’s face sharp for a stylized, professional photography look. “Focus mode leverages background segmentation and face detection technology,” an Instagram spokesperson told me when asked how it works without the need for dual cameras.

Focus can be found in the Instagram Stories format options alongside Boomerang and Superzoom in both the selfie and rear-facing cameras, and it rolls out globally today on iPhone 6s, 6s+, 7, 7+, 8, 8+ and X, as well as select Android devices. That’s compared to Apple’s portrait mode that only works on the iPhone 7+, 8+, and X, and Android portrait mode that exists on the Pixel 2 and Pixel 2 XL. Instagram’s launch could also suck attention away from “fake portrait mode” apps like Magic Portrait Mode, FabFocus, LightX and Point Blur that can also add blurry background “bokeh effects” to images.

This comparison provided to TechCrunch by reader Genady Okrain shows how Instagram Focus blurs the background, but can make the edges of the face look a bit hazy too. The iPhone portrait mode that takes advantage of newer models’ dual cameras does a little better job of keeping the whole face in focus, but it’s not available on older iPhones and can’t do video.

Focus gives people another reason to choose Instagram over Snapchat, and could make shooting inside the Instagram app more appealing. After eight years of sunsets and latte art, it’s the selfies and portraits that still feel fresh on Instagram. Making them look as good as possible could keep Instagram from growing stale as it rockets toward 1 billion users. 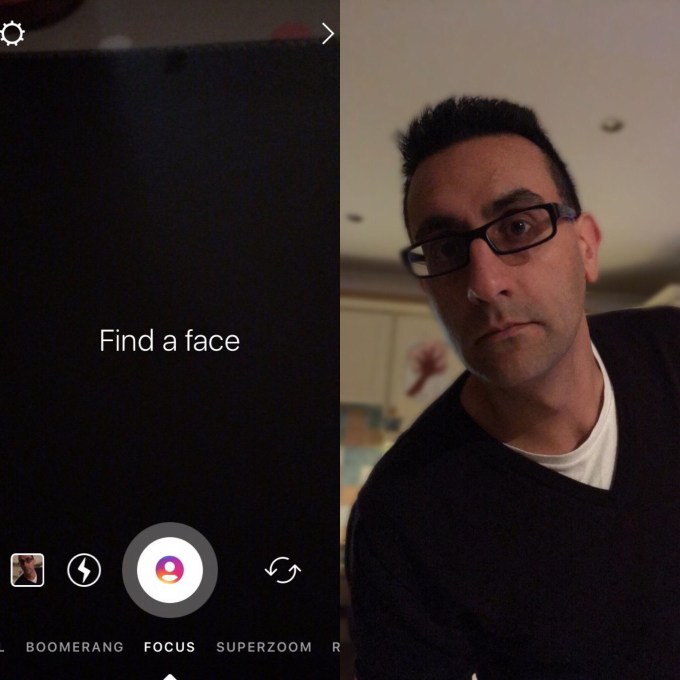 Focus appears as an Instagram Stories format alongside Boomerang and Superzoom. Screenshots via Social Pip

Meanwhile, Instagram is starting to roll out Mentions stickers that make it easy to tag friends in a Story with a stylized graphic instead of just text. Instagram tested these last month, but now they’re becoming available to all iOS users. Just like adding emoji to photos and videos, you can select the Mention sticker, use the typeahead to find a friend’s username and tag them in a resizable sticker. That lets people tap through to view their profile, and generates a notification to the tagged user.

Instagram has had text mentions since November 2016, soon after it launched Stories, but Snapchat just added them last month. Mentions could make it easier for creators on both the apps to collaborate and cross-promote each other, or encourage fans to spread their name to friends. 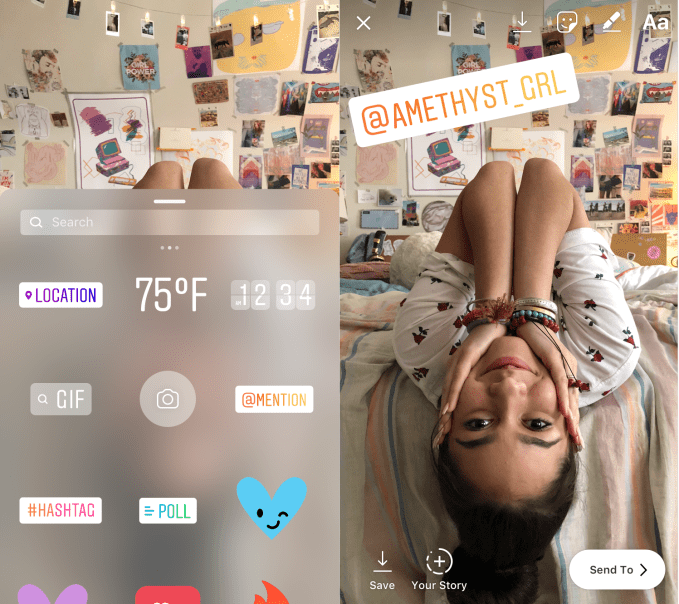 As Facebook endures unending scandals, Instagram has remained relatively unscathed by the backlash. Without links and resharing, it’s immune to a lot of the fake news and politics that have made Facebook exhausting. Instagram seems to see rapid feature development as the best distraction. Beyond Focus mode, TechCrunch recently reported that Instagram voice and video calling features are hidden inside the app’s code. And it’s just begun testing a Snapchat QR code-style feature called Instagram Nametags that makes it easy to follow someone.