Pinterest is known for having, and promoting, a lot of business content. It’s actually a majority of the content, and it’s usually from some of the most well-known brands that feed into the kinds of sometimes dream-level wants and needs of its users.

And while a majority of Pinterest’s potential is locked up there, the company has increasingly turned its gaze toward smaller and smaller businesses to try to entice users with local content — including that clothing store right down your street. That’s part of the reasoning behind Pinterest’s Propel program, which it started a year ago to work with small businesses that really either didn’t know what they were doing, or had just never done it before. In another step toward that goal, Pinterest has hired Matt Hogle to be the global head of small business.

Hogle spent 9 years at Facebook, working with small businesses and will be part of the effort for the company to try to find the right set of tools and strategies in place to appeal to small businesses as it starts to ramp it into a significant portion of its revenue. The number of small businesses advertisers on Pinterest has increased by around 50% year-over-year, the company said, and it looks to continue to refine a kind of hybrid strategy that mixes platforms and interactions with real people in order to entice those businesses. That’s important for, say, a local clothing store that only has one store and a limited online shop, but has products that would perform well on their own as content on Pinterest — and could quickly add revenue if they started advertising on it.

“We, as an ads business, know what customers’ business objectives are, and we capture that at the early stages,” Pinterest head of global sales Jon Kaplan said. “We know what they’re targeting, how they’re targeting, who, and we know the creative best practices. We should be able in the very near future to take all these elements and say, oh this is your objective, we’ll obfuscate all this complexity and hit a target [return on ad spend] you have. We’re not far. We’ve obfuscated a lot of the levers one can pull in Propel.”

Propel, for now, is adopting an increasingly popular human/digital approach for smaller businesses that are looking to advertise for the first time on Pinterest. If they have no experience whatsoever, or don’t even know what to do, Pinterest’s goal is to serve as a resource for best practices when it comes to creative content down to where to target it. Pinterest is increasingly rolling out more self-serve tools with more robust targeting and tracking, but the kind of small businesses — the sum of which could eventually account for a big chunk of its revenue — that Facebook has snapped up with the prospect of getting in front of the exact right people at the right time. The company says it will be rolling out the “promote” button, which allows advertisers to click a button on a pin to quickly spin up a campaign, to Australia, Canada, Ireland, New Zealand and the UK in the next coming weeks.

In the end, Pinterest still has 200 million monthly active users, which is absolutely dwarfed by Facebook’s billions of users. But at the same time, Pinterest may be able to capitalize on the good will that Facebook has torched in light of its massive privacy scandal in which information on as many as 87 million users ended up in the hands of a research firm without authorization or permission. Facebook can prove a return on spend, but it can’t at the moment prove that it’ll be able to keep doing the same things that get that return on spend now that the Internet is revolting against Facebook for its massive breach of trust. (Hogle, to be clear, joined before details on the Cambridge Analytica scandal began pouring in.)

Pinterest’s value to advertisers is that it’s able to capture a potential customer when they are just a user clicking (or tapping) around Pinterest looking for ideas. Whether planning life events or just looking for wardrobe suggestions, Pinterest is able to go to advertisers and say they can catch them in those discovery stages and then stick the right ad in front of them to get their attention. Then, the service can follow the user all the way from when they are actually interested in doing something, searching for what to do, and eventually saving that product — or buying it.

It’s that potential value for advertisers that’s taken it to a $12.5 billion valuation in its most recent financing round. But while Pinterest is probably still a sort of curiosity buy for larger advertisers and brands, the challenge has been to chase down the businesses that don’t have huge marketing budgets and might not even be considering Pinterest as a potential advertising platform. After all, the playbook for Facebook is robust and there are plenty of success stories, and the same is true for Google. But at the same time, that bespoke coffee shop down on Valencia Street in San Francisco may have products that line up perfectly for a Pinterest user that’s looking for a holiday gift down the line.

“Over the coming nine months, into 2019, I think we’re gonna continue to invest in ways that make it easy for our small businesses to grow with us,” Hogle said. “Small businesses are unique in the sense that they don’t have the time or energy or resources — the CEO might also be the HR person and the marketing person, and so on. We need to make it extremely lightweight and seamless. At the end of the day, if we can’t provide value and deliver on the money they spend with us and demonstrate the value that’s created there — sales being that number one performance indicator for these companies — then we’re failing. The things we’re gonna continue to build are ways to make that process as easy and seamless.” 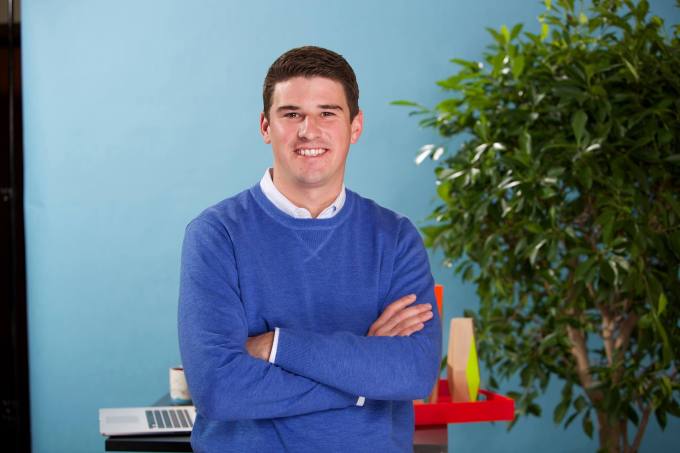 Hogle’s conversations started mid last year with Tim Kendall, Pinterest’s former president who left in November last year. What started as an exchange of ideas turned, as these conversations often do, it discussions about a potential job at Pinterest, and finally months later he ended up joining to start helping with the company’s small business efforts. Pinterest is increasingly looking to staff up with a suite of executives that will help it get its business in order ahead of a potential IPO. That includes a new COO, Francoise Brougher, who joined in February from Square.

But if Pinterest is going to eventually go public, and get its employees and investors paid out for their efforts, it needs to show that it can be a business that’s beyond just a curiosity budget for a big brand. Getting small businesses on board, like the ones Hogle looks to capture that are right down the street, are a big part of what the company hopes will eventually show that it has a diversified revenue stream and not beholden to just the big and potentially fickle budgets of larger brands.

“Our ad platform is not very old by industry standards, but the rate of development on our self serve tools and the rate of development on interfaces for our small customers is moving at a pace where I’m really pleased,” Hogle said. “The ability to carve out opportunity for advertisers is something that’s moving really quickly. Is it where it needs to be long term, of course not, but we’re gonna continue to invest. One of the reasons I joined was it was very clear to me that small businesses were a priority. We are going to invest in products and we’re also going to invest in educational programs. We’re gonna invest and provide the necessary resources.”