When you’re a company as large as Google, you need to make build versus buy decisions every day, whether that’s buying a company or building the software or renting time on an undersea cable or building your own. Today, the company announced that it’s decided to build another undersea cable. This one will run from Japan to Guam and from Guam to Australia.

That’s a lot of territory, approximately 9,500 KM or almost 6000 miles, and it’s a major undertaking. The company doesn’t take a project of this scope lightly, but they felt that it was in their best interest from an economic and technical perspective. The cable has been dubbed JGA and will connect up with the existing Hong Kong-Singapore-Australia cable to build a ring that covers the Asia-Pacific region. 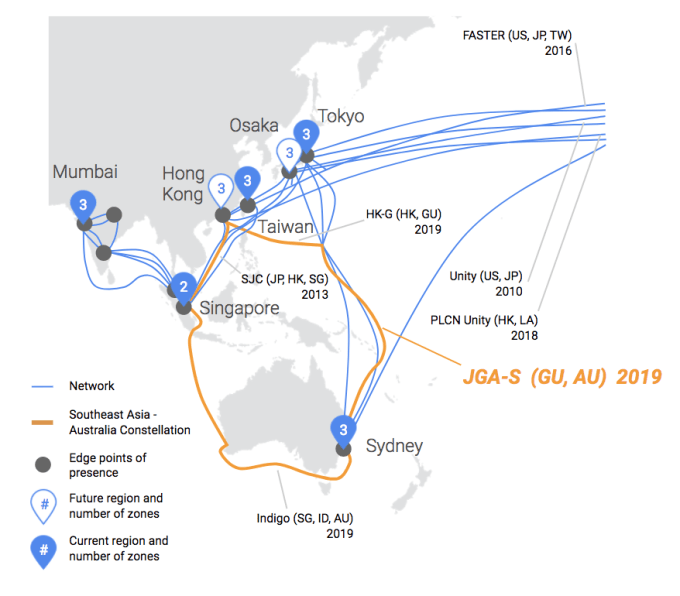 The decision to build the cable came down to an economic decision related to the sheer scale of Google usage, says Vijay Vusirikala, principal engineer at Google, whose specialty involves undersea cables. It becomes much more cost-effective to build their own cables than it does to rent time on somebody else’s when you reach a certain usage level. “This is essentially building infrastructure at scale and with scale getting the optimization benefits,” Vusirikala explained.

The parts of an undersea cable. Diagram: Google

“We have been using existing cables to connect to the different parts of the region. This announcement is part of the series of investments [we are making] to get us to scale and improve economics, he added.

Today’s announcement is really just the beginning of a project that could take well into next year to complete. It starts with building the cables in factories. The cables are built to last and withstand the conditions of lying in an ocean bed. Each cable contains fibre cables made of extremely high quality glass that can carry 100 terabits of traffic. To put that in perspective, Google says this is equal to 63,000 photos per second, or more than 650,000 simultaneous HD video streams.

While that’s going on a team of experts will map out the optimal routes for the cable to have the least amount of latency, while taking into account the easiest way to lay the cable. It’s a balancing act.

Eventually they put the cable on big spools, put the spools on ships and lay the cable in the sea bed. Each cable has a repeater ever 80 KM that pushes the signal further on its journey down the cable.

Michael Francois from Google’s Global Network Infrastructure team says these cables are built to last, but they can break occasionally. “They generally don’t fail once they are put in. They are [designed] to sit there a long time. Generally when something happens — it could be dropping an anchor on it and breaking through armoring of the cable. If it does break, it needs to be repaired by ship,” he said.

The project is part of a network of 300 cables worldwide. There has been an uptick in the number the last couple of years as cloud providers and hyper scalers like Facebook, Amazon and others require more connectivity across regions.

This video explains how the cable makes it from factory to sea bed.