When you look at the number of datacenters the hyperscale companies are developing worldwide, it can be a little frightening from an energy usage standpoint, but Google announced today that it acquired enough renewable energy to match 100 percent of its power consumption in 2017. That’s good news, but it’s not as good as using 100 percent renewable energy.

The distinction is important. Think of this kind of purchase like a carbon offset. For every bit of polluting energy, they buy a corresponding bit of renewables. It’s not ideal, but it’s a step in the right direction.

Urz Hölzle, Google’s senior vice president for technical infrastructure announced the milestone in a company blog post this morning. “Over the course of 2017, across the globe, for every kilowatt-hour of electricity we consumed, we purchased a kilowatt-hour of renewable energy from a wind or solar farm that was built specifically for Google. This makes us the first public Cloud, and company of our size, to have achieved this feat,” he wrote.

While bragging, he could even take a swipe at rivals that Google was the strongest company in this regard, having purchased three gigawatts (3GW) of output from renewable energy projects to the tune of $3 billion in energy investments. That’s the kind of competition we need to see more of.

He even included a graph to prove his point (and who doesn’t like visuals?). 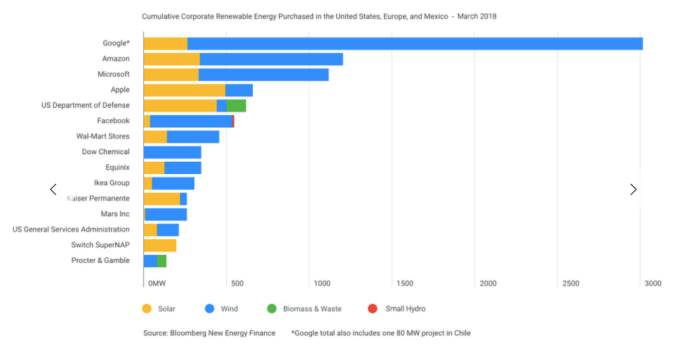 Of course, the ultimate goal would be to use 100 percent renewables to power its vast network of datacenters around the world, and Hölzle acknowledges that. “We say that we “matched” our energy usage because it’s not yet possible to “power” a company of our scale by 100 percent renewable energy. It’s true that for every kilowatt-hour of energy we consume, we add a matching kilowatt-hour of renewable energy to a power grid somewhere,”

The company does hope one day to acquire all of its energy requirements from renewable sources, but until then this program is a way of giving back. “This program has always been a first step for us, but it is an important milestone in our race to a carbon-free future. We do want to get to a point where renewables and other carbon-free energy sources actually power our operations every hour of every day. It will take a combination of technology, policy and new deal structures to get there, but we’re excited for the challenge,” he wrote.