Turns out there is a link between Peter Thiel’s secretive big data analytics firm, Palantir, and Cambridge Analytica — the political consulting firm at the center of the current Facebook data misuse scandal.

Starting in 2013, the New York Times reports that a UK-based Palantir employee worked with Cambridge Analytica — going on to gain access to the dataset of 50M+ Facebook users the latter firm obtained in 2014 via a third party personality quiz app deployed on the social network giant’s platform.

In testimony to the UK parliament yesterday, CA whistleblower Chris Wylie told MPs that senior Palantir employees worked with the firm on the Facebook data to help it build models off of the dataset to use for political ad targeting purposes.

At the time Wylie worked for SCL Group, the UK defense contractor that went on to form CA with funding from US billionaire, Robert Mercer. CA was later engaged by the Trump campaign, for the 2016 presidential election.

However in a statement to the NYT, Palantir has now modified this line — saying: “We learned today that an employee, in 2013-2014, engaged in an entirely personal capacity with people associated with Cambridge Analytica. We are looking into this and will take the appropriate action.”

The NYT reports it has seen documents showing that a London-based employee of the big data firm — named as Alfredas Chmieliauskas — worked with the CA data scientists who were building its psychological profiling technology.

The documents were presumably provided by Wylie (pictured below), who has also handed email and other documentary evidence to the DCMS committee investigating online disinformation in political campaigning, as well as to the UK’s data watchdog and Electoral Commission — both of which are also probing digital political campaigning issues (including around the UK’s 2016 Brexit referendum vote, which Wylie alleges CA also worked on). 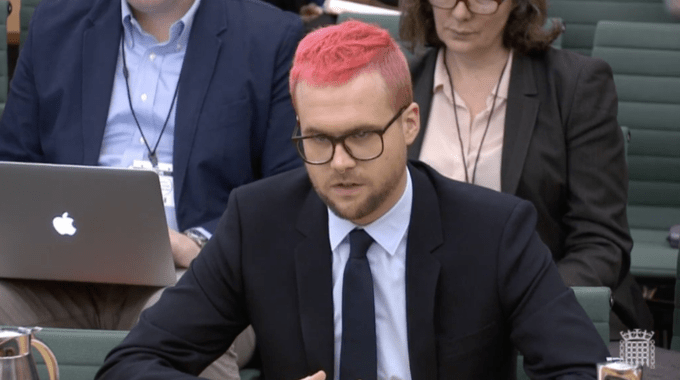 According to the NYT report, it was actually Chmieliauskas who came up with the idea for cloning the work of Michal Kosinski, the first Cambridge University academic that Wylie says CA approached for help to gather data.

Kosinski was deputy director at Cambridge University’s Psychometrics Centre at the time and, along with another professor at the department, David Stillwell, had already worked on a project drawing links between anonymized Facebook profiles and responses from personality surveys — with that data also obtained via a Facebook app — aiming to connect interests with voting tendencies.

Yesterday Wylie told the committee that Kosinski had asked for $500k up front from CA and 50% equity in the commercial venture to work on the project — which he said was ultimately why it ended up signing a data licensing deal with another Cambridge professor, Aleksandr Kogan, who agreed to work first on gathering the Facebook data and to discuss commercial terms later.

“I had left field idea,” Chmieliauskas wrote in May 2014, the NYT reports. “What about replicating the work of the cambridge prof as a mobile app that connects to facebook?” — going on to suggest this “could be a valuable leverage negotiating with the guy”.

Chmieliauskas’ LinkedIn profile states that he joined Palantir in April 2013 and remains employed at the company in London — working on “business development”.

It also includes the mission statement: “i fix or break large things”.

In the event, Chmieliauskas’ suggestion to clone Kosinski’s app led to CA’s data licensing relationship with Kogan, whose own personality test app — thisisyourdigitallife — was built bespoke for its project and successfully used to harvest data on 50M+ Facebook users so CA could, in turn, build psychological profiles on millions of American voters.

Wylie told the committee yesterday that a pilot of Kogan’s quiz app was launched in May 2014 with 10,000 Facebook users, before formal contracts were signed between CA and GSR — GSR being the company Kogan set up to commercialize the work with CA.

The app then was used to harvest the full Facebook dataset over the summer of 2014, garnering ~270,000 downloads — but able to pull far more data via Facebook’s (now shuttered) friends API.

Yesterday Wylie also claimed CA was able to pull data on “substantially” more Facebook users than even the 50M users that’s been reported so far.

Returning to Palantir, according to the NYT there were also discussions between SCL and Thiel’s firm in 2013 about working together on election campaigns. The newspaper said a Palantir spokeswoman confirmed the companies had briefly considered working together but claimed it had declined a partnership — in part because executives wanted to steer clear of election work.

We reached out to Palantir for confirmation and a spokeswoman sent its updated statement (below) — following what she described as an “initial investigation”.