The lawsuits are piling up against Facebook in the wake of the Cambridge Analytica data misuse and political ad targeting scandal.

According to SF Gate the company has been hit with four suits in federal courts so far this week following fresh revelations about how Facebook’s app permissions were abused to surreptitiously suck out vast amounts of user data.

One lawsuit filed yesterday in Northern California on behalf of a Facebook shareholder, Jeremiah Hallisey, alleges the company’s senior management “breached their fiduciary duties by failing to prevent the initial misappropriation [of user data by CA] and, after learning of it in 2015, failing to inform affected Facebook users or the public markets”.

It notes Facebook has lost $50 billion in market capitalization since the data leak was disclosed, and flags reports that the FTC has launched an inquiry into Facebook’s conduct and whether it violated the terms of a 2011 consent decree that requires the company to notify users before sharing their data with third parties.

We’ve reached out to Facebook for comment but at the time of writing the company had not responded.

Last week the New York Times and the Observer of London reported revelations from former CA employee Chris Wylie, who detailed how working with a University of Cambridge psychology professor who had developed a survey app to run on Facebook, the political consultancy had been able to obtain vast amounts of user information — as many as 50 million US Facebook users’ profiles — without the vast majority of the users being aware their data had been harvested nor what it would be used for. The firm had been working for the Trump presidential campaign.

After the newspaper reports Facebook acknowledged that 270,000 people had downloaded the survey app.

CEO Mark Zuckerberg has also since gone on CNN to apologize. But the scope and scale of the data mishandling, coupled with Facebook’s failure to inform users when it found about the policy breach in 2015 have played very badly with markets and users alike… 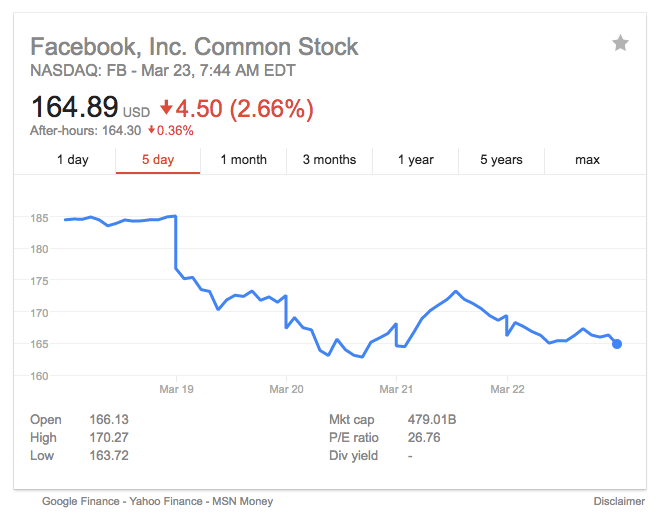 “The recent revelations regarding Facebook’s actual practices with respect to user privacy and data security have severely damaged the Company’s reputation and imposed significant costs on it, including regulatory investigations, lost business, exposure to litigation, and other damages,” the complaint runs, before going on to allege that Facebook sought to “downplay concerns about access to user information” and “continued to assure investors that Facebook maintained effective” internal controls and systems that automatically detected ‘suspicious activity'”.

In a statement, Mark Molumphy, a partner with Cotchett, Pitre & McCarthy — the firm representing Hallisey — said: “Facebook’s apology doesn’t do much for the millions of Americans impacted by this conduct. It also doesn’t explain why Facebook executives waited three years to inform their loyal users and shareholders of the massive breach, especially on the heels of the FTC consent decree in 2011.  This action seeks accountability from those entrusted to safeguard our personal information and who seem to pay only lip service to the privacy concerns of their users.”

Also adding to the awkward questions for Facebook: Board member, Thiel, who supported Trump’s presidential bid, made a $1M financial donation to a Trump-supporting Super PAC, called Make America Number 1, in 2016 — which Mashable reports subsequently paid Cambridge Analytica $231,352 toward the end of the same year, per an FEC filing.

Earlier this week, a proposed class action was also filed in California by a group of Facebook users seeking damages from the company for failing to protect their data.

On Tuesday, another shareholder lawsuit was filed. Gizmodo reports that complaint shareholder Fan Yuan has accused the company of making “materially false and/or misleading” claims about its handling of user data, and failing to disclose the ongoing situation has reduced the value of Facebook shares.

A fourth suit has been filed by another shareholder, Robert Casey. And Facebook will surely face more before the outrage over this epic fail privacy scandal burns out.

It also seems very likely that additional app permissions problems will come to light as Facebook has committed to a historical audit of any apps that were accessing large amounts of user data around the same time as CA was. Safe to say, it would be very unusual if the app used by CA to suck out Facebook profiles en mass was the only third party app to be acting out before Facebook acted on regulatory recommendations to tighten its app permissions, starting in 2014.