As Dropbox had its IPO moment this morning, more than 10 years after launching, we can finally put one myth to rest. Dropbox and Box were never targeting the same customers.

If you are a VC and still don't get why Box and Dropbox are fundamentally different businesses, maybe stay away from SaaS. https://t.co/4O7Xks8Dbb

Same goes for investors, analysts and journalists. If you don’t believe they’re different, consider that in Dropbox’s S-1 paperwork they filed with SEC, you will note they didn’t even list Box as a primary competitor: “We compete with Box on a more limited basis in the cloud storage market for deployments by large enterprises,” the company wrote.

They had something in common, of course, but Dropbox has always been about managing files in the cloud, while Box has been focused on enterprise content use case cases in the cloud — and that’s a very different approach.

As Shria Ovide pointed out in her analysis on Bloomberg after the filing, the S-1 also proved that Dropbox has always been a “a consumer software company with a side hustle.” That side hustle was the enterprise business. (She also pointed out on Twitter that they may be the first company to use a cupcake emoji in their S-1, which is actually kind of cool).

Consumer with a dash of enterprise

It turns out that vast majority of Dropbox’s combined business and consumer revenue of more than a $1 billion came from consumers.  Dropbox has always offered an attractive consumer storage tool. It’s well integrated into desktop OSs and it has a nice mobile tool.

I use it and for $10 a month I get a terabyte of storage. I can back up my life there and it incorporates neatly into Finder on my Mac. When I capture screens they go automatically to Dropbox. It provides a place to back up my photos from my phone. It’s convenient and easy and it works. 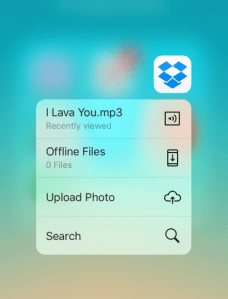 It seemed that such a tool would translate nicely to business, but Alan Pelz-Sharpe, founder and principal analyst at Deep Analysis, who has been following this space for years, says Dropbox has always primarily been confined to teams on the business side. “Dropbox is primarily a consumer company with 500 million users, [with] only about 300,000 teams using their business offering,” he told TechCrunch.

That’s not to say they aren’t trying to capture more of the enterprise. In the weeks prior to the IPO, they made a pair of announcements designed to increase their enterprise credibility including one with Google to store G Suite documents natively in Dropbox and one with Salesforce to embed Dropbox folders in Salesforce Sales and Marketing clouds.

For now though, even with this business push, Pelz-Sharpe points out that most of Dropbox’s business customers are small teams of 3 or more people with a dash of larger implementations. “Nor are people building much on top of Dropbox in the way of business applications – it remains primarily a very efficient file sharing system,” he explained.

This in contrast to Box, which has been working primarily with large enterprise companies for years to solve much more complex problems around content. Aaron Levie from Box said he’s absolutely rooting for Dropbox, but they have always been going after different markets, since Box decide to go enterprise about two years into its existence.

“We are fundamentally building two very different companies. Both are large markets. While there is no limit to the scale they could become, we have built a very different business around how do you serve [large companies] and deal with unstructured company data — and it’s a very different product set [from Dropbox],” Levie told TechCrunch.

Dropbox was off to a great start today with stock soaring, up nearly 40 percent in early trading, but however Dropbox ends up doing in the days and months ahead, they will do it having made their mark mostly as a consumer company — and that’s fine. If they continue to build their enterprise business over time, it will be all the better for them, but it turns out up until now, the only thing Box and Dropbox had in common was both had “box” in their names.

Have a look at Dropbox’s debut at the TechCrunch 50 (the precursor to TechCrunch Disrupt) in 2008: