Facebook is using us. It is actively giving away our information. It is creating an echo chamber in the name of connection. It surfaces the divisive and destroys the real reason we began using social media in the first place – human connection.

It is a cancer.

I’ve begun the slow process of weaning myself off of the platform by methodically running a script that will delete my old content. And there’s a lot. There are likes and shares. There are long posts I wrote to impress my friends. There are thousands of WordPress notifications that tell the world what I’m doing. In fact, I would wager I use Facebook more to broadcast my ego than interact with real humans. And I suspect that most of us are in a similar situation. 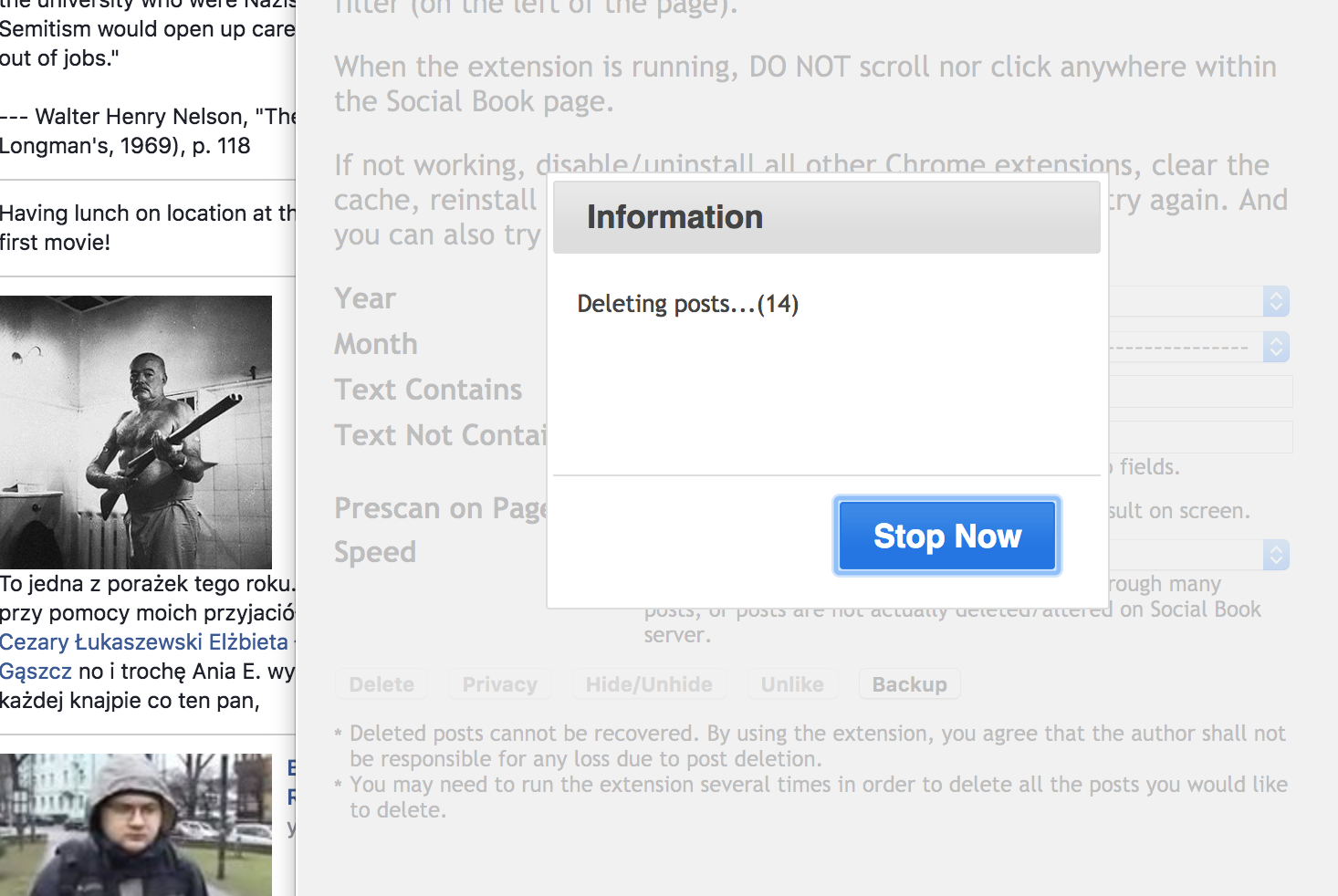 There is a method to my madness. I like Facebook Messenger and I like that Facebook is now a glorified version of OAuth. It’s a useful tool when it is stripped of its power. However, when it is larded with my personal details it is a weapon and a liability.

Think about it: any posts older than about a week are fodder for bots and bad actors. Posts from 2016? 2017? Why keep them? No one will read them, no one cares about them. Those “You and Joe have known each other for five years” auto-posts are fun but does anyone care? Ultimately you’ve created the largest dossier on yourself and you’ve done it freely, even gleefully. This dossier reflects your likes, your dislikes, your feelings, and political leanings. It includes clear pictures of your face from all angles, images of your pets and family, and details your travels. You are giving the world unfettered access to your life. It’s wonderful to imagine that this data will be used by a potential suitor who will fall in love with your street style. It’s wonderful to imagine you will scroll through Facebook at 80 and marvel at how you looked at the turn of the century. It’s wonderful to imagine that Facebook is a place to share ideas, dreams, and hopes, a human-to-human connection engine that gives more than it takes.

None of that will happen.

Facebook is a data collection service for those who want to sell you products. It is the definitive channel to target you based on age, sex, geographic location, political leanings, interests, and marital status. It’s an advertiser’s dream and it is wildly expensive in terms of privacy lost and cash spent to steal that privacy. It is the perfect tool for marketers, a user-generated paradise that is now run by devils.

Will you delete Facebook? Probably not. Will I? I’m working on it. I’ve already been deleting old tweets after realizing that border police and potential employers may use what I write publicly against me. I’m clearing out old social media accounts and, as I mentioned before, deleting old Facebook posts, thus ensuring that I will no longer be a target for companies like Cambridge Analytica. But we love our social media, don’t we? The power it affords. The feeling of connection. In the absence of human interaction we cling to whatever dark simulacrum is available. In the absence of the Town Square we talk to ourselves. In the absence of love and understanding we join the slow riot of online indifference.

When Travis Kalanick led his ride-sharing company down the dark path to paranoia, bro culture, and classist rantings we reacted by deleting the app. We didn’t want to do business with that particular brand of company. Yet we sit idly by while Facebook sells us out and its management pummels and destroys all competition.

I wish it didn’t have to be this way. There is plenty of good in these platforms but the dangers far outweigh the benefits. Try to recall the last time you were thankful for social media. I can. It happened twice. First, it happened when I posted on my “wall” a eulogy for my father who died in January. The outpouring of support was heartening in a dark time. It was wonderful to see friends and acquaintances tell me their own stories, thereby taking the sting out of my own. But months later that good feeling is gone, replaced by ads for fancy shoes and political rants. Out of the Facebook swamp sometimes surfaces a pearl. But it sinks just as quickly.

One more sad example: I found out, accidentally, that my friend’s wife died. It appeared on my feed as if placed there by some divine hand and I was thankful it surfaced. It beat out videos of Mister Rogers saying inspiring things and goofy pictures of Trump. It beat out ads and rants and questions about the best sushi restaurant in Scranton. The stark announcement left me crying and breathless. There it was in black and blue, splashed across her page: she was gone. There was the smiling photo of her two little children and there was the outpouring of grief under these once innocuous photos. Gone, it said. She was gone. I found out from her wall where her memorial service would be held and I finally reached back out to my old friend to try to comfort him in his grief. Facebook, in those two instances, worked.

But Facebook isn’t the only thing that can give us that feeling of connectedness. We’ve had it for centuries.

Facebook simply replaced the tools we once used to tell the world of our joys and sorrows and it replaced them with cheap knock-offs that make us less connected, not more. Decades ago, on one coal-fogged winter morning in Krakow, Poland where I was living, I passed Kościół św. Wojciecha with its collection of nekrologi – necrologies – posted on a board in front of the church. There you saw the names of the dead – and sometimes the names of the newly born – and it was there you discovered what was happening in your little corner of the world. The church wasn’t far from the central square – the Rynek – and I walked there thinking about the endless parade of humanity that had walked across those cobbles, stopping for a moment in their hustle at the church yard to see who had died. I stood in the crisp air, flanked by centuries old brickwork, and imagined who once populated this place. This was the place you met your friends and your future partners. It was there you celebrated your successes and mourned your failures. It was there, among other humans, you told the world the story of your life, but told it slant. You witnessed kindnesses and cruelties, you built a world entire based on the happenings in a few square miles. 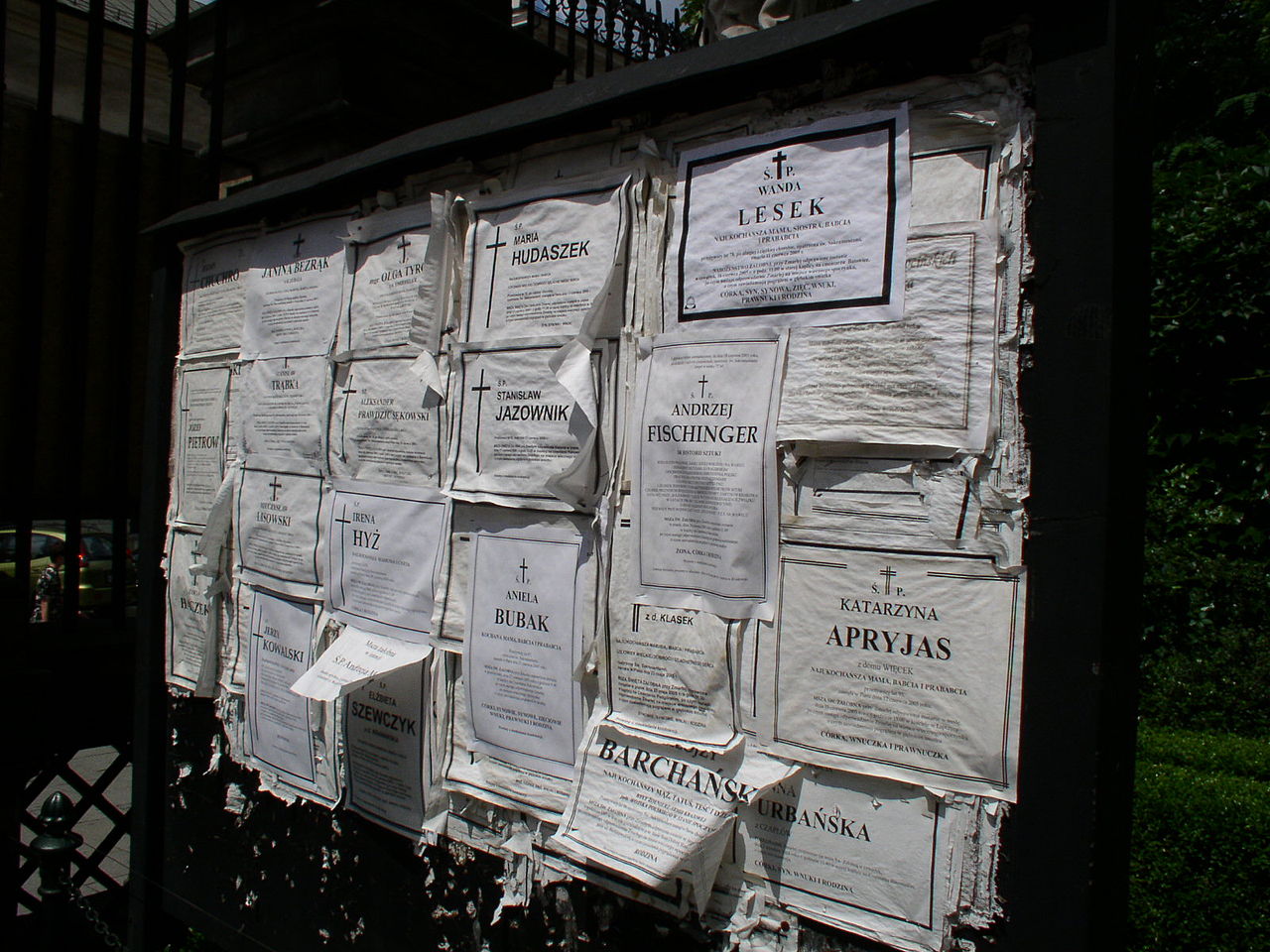 No more. Or, at least, those places are no longer available to most of us.

We’ve moved past the superstitions and mythologies of the past. Tools like Facebook were designed to connect us to the world, giving us an almost angelic view of daily happenstance. We replaced the churchyard with the “timeline.” But our efforts failed. We are still as closed, still full of superstition, as we were a hundred years ago. We traded a market square for the Internet but all of the closed-mindedness and cynicism came with it. We still disparage the outsider, we still rant against invisible enemies, and we still keep our friends close and fear what lies beyond our door. Only now we have the whole world on which to reflect our terror.

It doesn’t have to be this way. Maybe some day we’ll get the tools we need to interact with the world. Maybe they’re already here and we just don’t want to use them.

Until we find them, however, it’s probably better for us to delete the ones we use today.