Tesla’s Model 3 is making progress heading out to customers (though not as much as either Tesla or those on the waiting list would like) and as a result, we got a chance to spend some time in one of the new production models that just rolled off the line. The Model 3 is a much more affordable car from Tesla than either its Model S or Model X, and it hopes to one day achieve true mass market success.

Tesla managed to amass somewhere around 500,000 pre-orders for the car, so it’s definitely a hotly anticipated item. This is the kind of enthusiasm generally reserved not for vehicles, but for high demand consumer electronics. Make no mistake, however: The Model 3 is a car first, and a gadget second, and probably the most fun you can buy on four wheels on real roads at this price point.

As equipped, the Model 3 we test drove had a retail price of around $57,500, which includes all the upgrade options, Autopilot and longer driving range thanks to an enhanced battery pack. It also includes a panorama-style all glass roof and leather-appointed seating. For the time being, the extended range option is the only choice for new Model 3 buyers (the basic model will be available once there’s more production volume), so at the very least your starting price is going to be $44,000 for now.

That puts the car in a class with other entry level luxury vehicles like the BMW 530e hybrid, for instance, so it’s not exactly an ‘affordable’ car in the traditional sense. But it’s still potentially going to be able to net you some tax incentives, and it’s about half the price of a similarly appointed Model S or Model X. 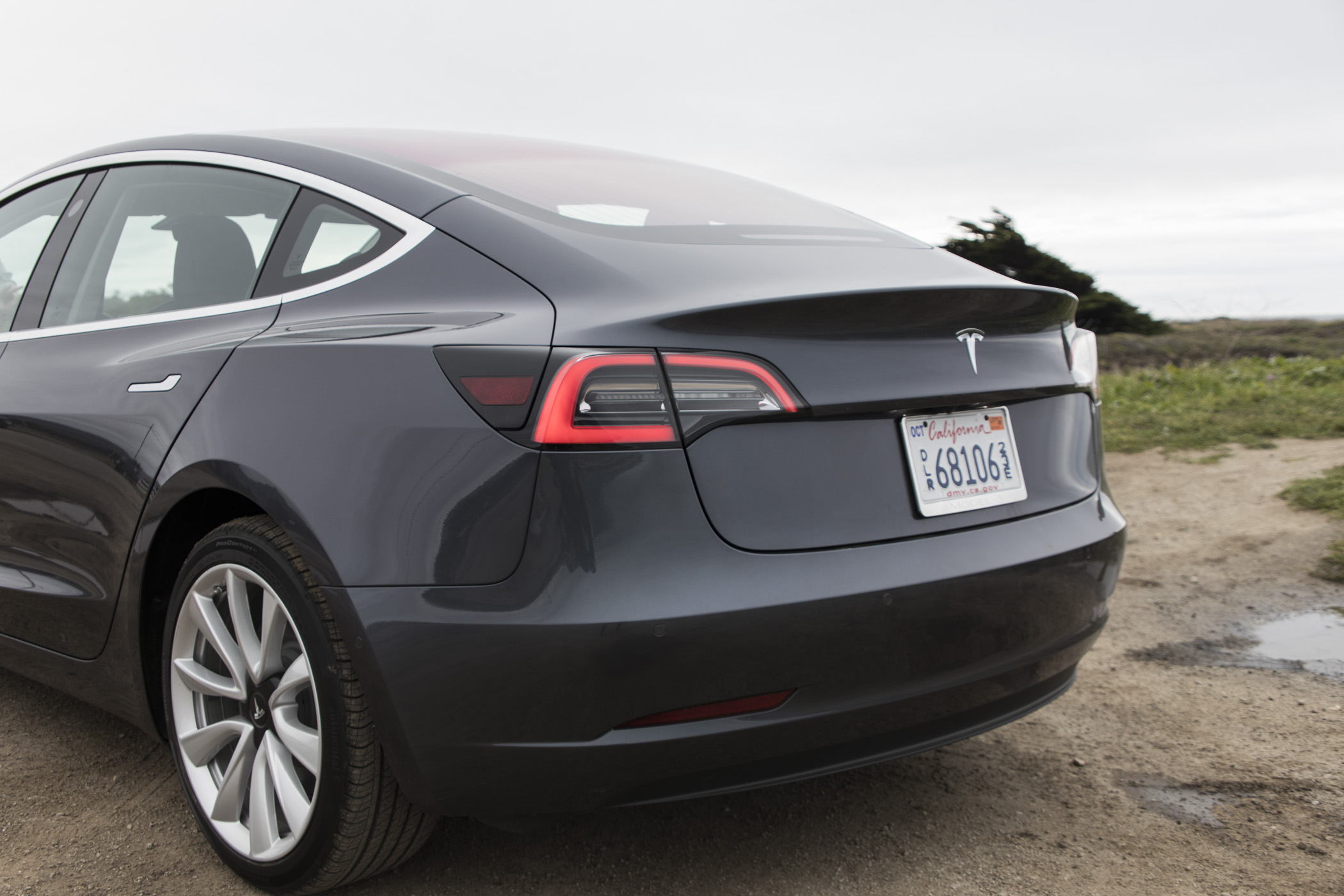 The all-electric rear-wheel drive powertrain, which provides instant acceleration that feels like more power than you have any right to expect from this kind of car. To me, its acceleration felt more manageable than the truly awesome amount of power present on the Tesla Model X P100D I tested out last month – but still truly thrilling measured on any scale.

In fact, the most fun I had with the Model 3 while testing the car was in driving it up and down a windy road with a few clear straightaways in a sleepy Northern California rural town. The roadway was empty save for me and the Model 3, and I got the chance to see how it did getting up to 60 from a stop start, and how it handles those curves. Bottom line: It’s quick to achieve speed, and it hugs the road like it’s glued to the thing (the bottom-heavy design thanks to the battery pack helps), so you can really take the corners in stride.

On the highway, the quick acceleration helps when you’re dealing with tricky merges, and of course the Model 3 has Autopilot on board, which works just as it does in other vehicles in Tesla’s lineup. It’s a godsend in California traffic, and likely just as effective anywhere you’re stuck with stop-and-go freeway or highway driving.

Driving is where the Tesla Model 3 excels the most, which is why I wanted to lead with that in this review – this is a driver’s car, built not just for people who know they love to drive, but also for people who might not be aware of how much fun it can be, especially if you’ve never had the pleasure of using a vehicle with an electric powertrain before. Cars including the BMW i3, the Chevrolet Bolt, the Tesla Model S and Model X, and now the Model 3 have all ruined me for internal combustion engine cars: One you’ve gone electric, you can’t really go back. 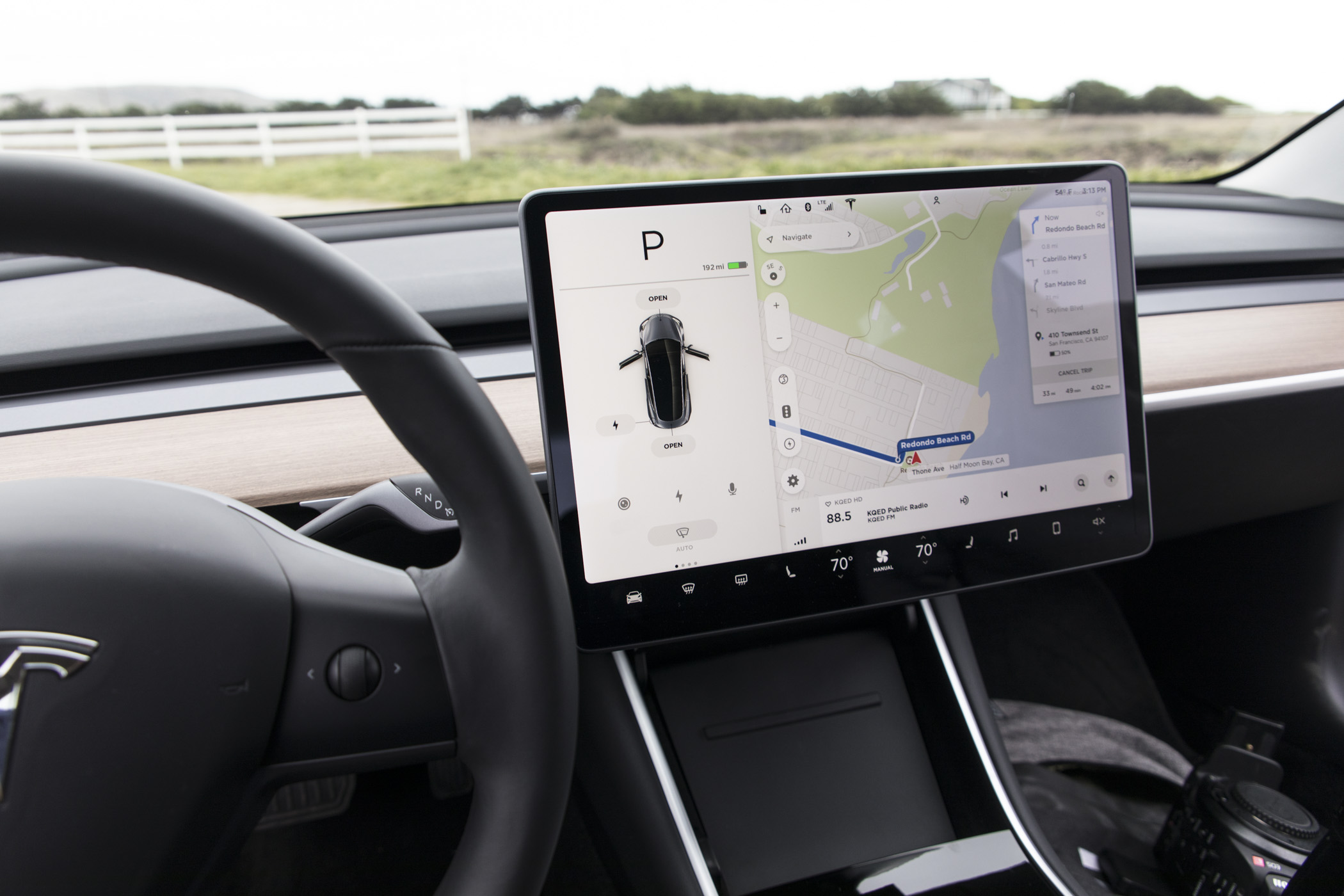 The Model 3 also does as much as possible to draw focus to the driving experience. In large part, this is due to the spare cockpit design, which moves all instrumentation and information display to the single, 16-inch touchscreen panel mounted in the center of the dash. This screen is occupied on the left third by key information relevant to the driver (and indeed sits just in your peripheral view while looking straight out the windshield) and the remaining two-thirds is taken up by information display about routing, media, car settings and more.

It’s a bit of a mixed blessing in terms of a vehicle interface: On the one hand, it’s terrific to have an unobstructed view of the road – it’s as pure as driving experience as rolling down the track in the soapbox derby car of your youth, and it really leaves you feeling connected to the road itself. The effect is aided by the lack of any obvious vents, since the dash has one full-length break that handles all of the air circulation by pitting two air foils against one another to direct air very precisely where you want it to go.

The steering wheel is still there, of course, and it features a stock-mounted lever for putting the car into drive, reverse and park, and for controlling Autopilot if enabled. The wheel also has two multipurpose, multidirectional controllers both right and left of center. The left controls volume and track skipping, as well as play/pause for media by default. The right doesn’t do anything by default right now, but Tesla is considering using it for managing speed when Autopilot is engaged (currently handled via touchscreen). 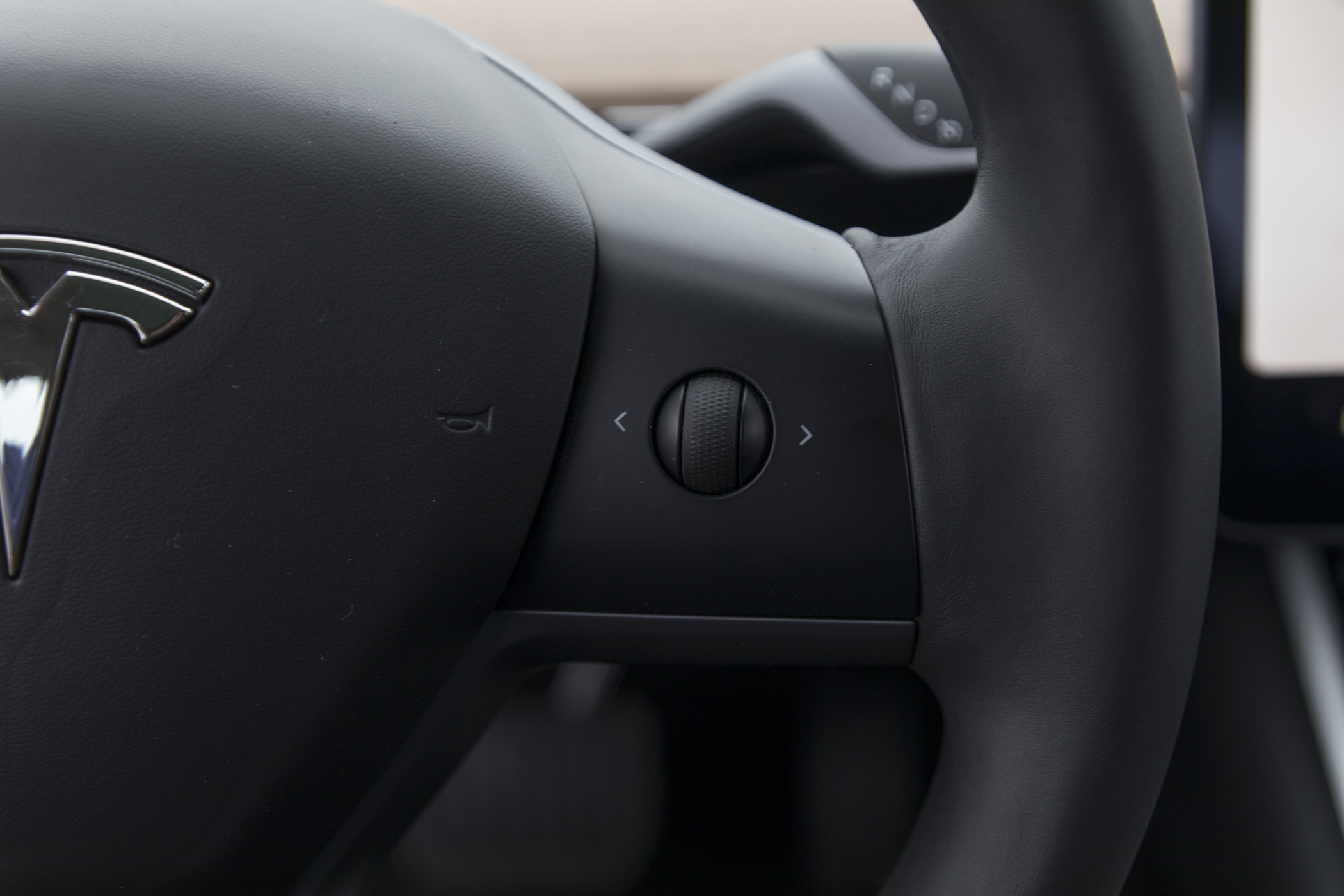 Those two controls are contextually variable, so they can control the angle of your rear view mirrors when you’re adjusting those via the center screen, for instance. Tesla left them unlabeled by design because they wanted them to be flexible, and in general it seems like a good idea, if it still needs a bit of working out in terms of how it works in practice.

The Model 3’s biggest weakness, overall, is the touchscreen interface. It’s actually an excellent touchscreen, with very responsive scrolling and touch detection, smooth animations and zero missed taps during my usage. The problem is that there’s a lot to wade through to find just what you’re looking for, and it doesn’t do enough to simplify and declutter the experience for use specifically while driving.

I actually got used to a lot of the system’s quirks quicker than I thought I would, but it’s still definitely something where I would’ve appreciated a few physical controls for specific functions, including windshield wipers, even if it spoiled the cockpit’s otherwise excellent minimalist design. 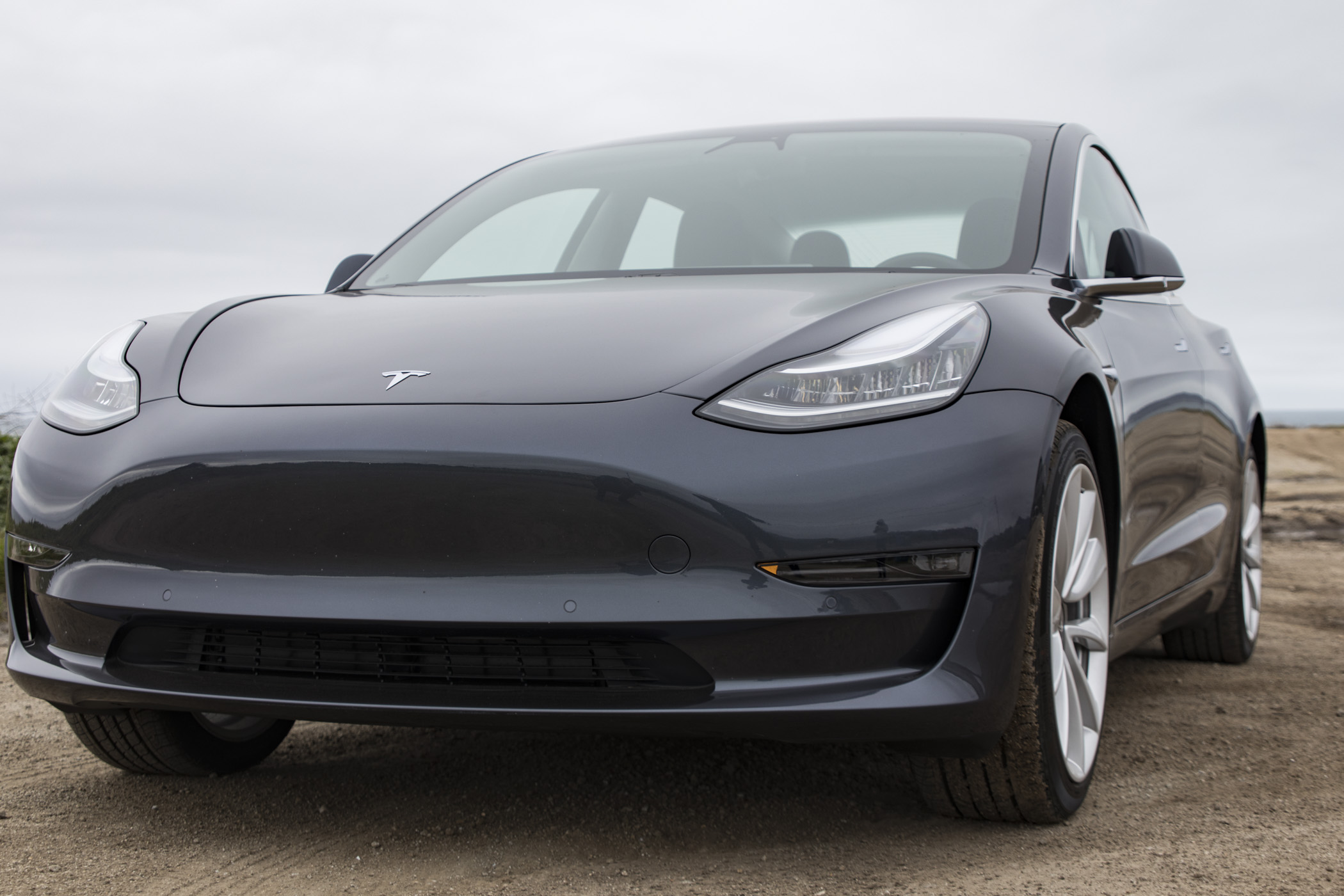 That’s actually the only real issue I had with the Model 3 during testing, and it was not negative enough that it would prevent me from buying one of these, were I in the market for a new car, with available funds and availability of stock on Tesla’s end. This is easily the most fun car I’ve driven in this price range that I can recall, and while occasionally clunky, the touchscreen didn’t impede my enjoyment or my ability to drive the vehicle safely at any time during testing.

Other reviewers have noted some problems with body panel fit and finish on their review cars; Tesla said mine was freshly entered into the press fleet, so that might be why I didn’t notice any of said problems, but I genuinely didn’t see any of those flaws even if they existed. Tesla’s biggest issue with this vehicle is that it can’t make enough to come anywhere close to satisfying demand. The Model 3 is finally in more showrooms across the country, but it’s still going to take a while to satisfy existing orders, let alone to begin filling new ones.

The bottom line is that if you need a car in the next few years or so but you’re happy to wait (potentially) that long, it might be worth putting up a down payment to save your spot in line. The Model 3 is a solid piece of eccentric joy in a market filled with staid and boring choices.