A PhD candidate in Computer Science at Columbia Engineering, Brian A. Smith, created a new system for blind gamers who want to get a little racing in. The system, called racing auditory display or RAD, is truly amazing. It lets the visually impaired play racing games without “seeing” the screen. Instead, the audio output tells the player when they’re getting closer to an edge and can even enable to them to cut corners in tight turns.

“The RAD is the first system to make it possible for people who are blind to play a ‘real’ 3D racing game–with full 3D graphics, realistic vehicle physics, complex racetracks, and a standard PlayStation 4 controller,” said Smith, who worked on the project with Shree Nayar, T.C. Chang Professor of Computer Science. “It’s not a dumbed-down version of a racing game tailored specifically to people who are blind.”

The audio changes as players approach turns and tells them where they are on the road. Interestingly, RAD allows blind players to play as well or better than sighted players. The system is universal so game makers can embed the system into upcoming racers. The research paper is available here. 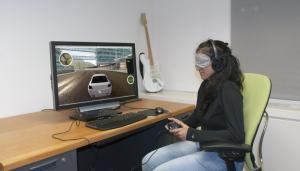 “The RAD’s sound slider and turn indicator system work together to help players know the car’s current speed; align the car with the track’s heading; learn the track’s layout; profile the direction, sharpness, timing, and length of upcoming turns; cut corners; choose an early or late apex; position the car for optimal turning paths; and know when to brake to complete a turn,” said Smith. Smith built a racing game in Unity and added RAD to the prototype. He then worked with 15 participants from Helen Keller Services for the Blind and volunteers at Columbia

“With the RAD, Edis could not only play our prototype racing game, but do so with the same lap times and driving paths as sighted players,” Smith said.

One player, Edis Adilovic, loved the freedom it gave him.

“After the training was done, I had the possibility of doing whatever I wanted to,” he said.