Snapchat has always been terrible at analytics, only showing daily Story view counts that content creators had to screenshot just before they disappeared every 24 hours in order to prove their worth to sponsors. But starting today, tens of thousands creators who make official Stories or have large followings will start seeing a slew of view count and demographic analytics on their Snapchat profile. 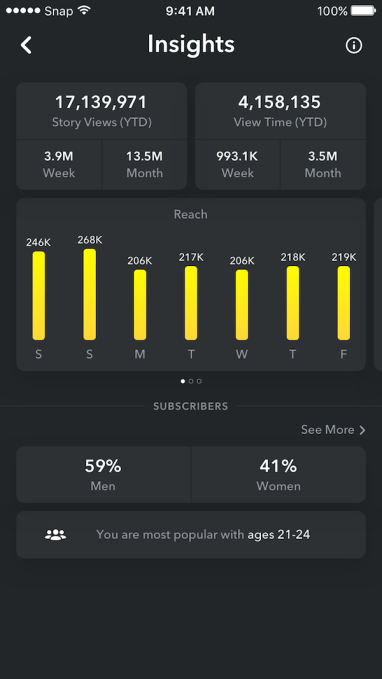 These new analytics include:

The new analytics could help creators show their total reach to secure sponsored content and product placement deals, refine their posts to match their audience, and compare their following to that on other platforms. A truck company might not care if a creator has 200,000 views a day, but if they can show those views come from men age 25-34 in the Midwest who like the outdoors, the business could pay $50,000 for the creator to feature their trucks in their Snaps.

It appears that Snapchat is changing its ways following CEO Evan Spiegel’s strategy flip-flop on the Q3 2017 earnings call when he said “We have historically neglected the creator community on Snapchat . . . In 2018, we are going to build more distribution and monetization opportunities for these creators.” Snapchat wasted a lot of time, considering I wrote about “Who will be the first Snapchat Stories celebrity?” back in 2013 a week after the feature launched, and creators like Mplatco (whose art is featured above) have been getting paid by brands like Disney since 2014.

Now it’s truly embracing these independent creators for alongside the rollout of the redesign that pulls creators out of the friends’ Story list and puts them with other professional entertainers in the Discover section, but that also for the first time promotes social media stars you don’t already follow. For years Snap refused to help creators get discovered, work with them on feature launches, help them if locked out of their account, or provide monetization opportunities. It only began verifying some with a special emoji on their name last year, and there’s still no revenue sharing options like creators find on YouTube and Facebook. 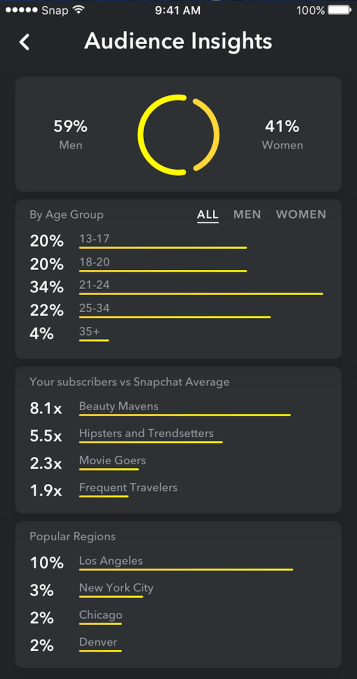 One of Snapchat’s first stars who routinely pulls in five-figure sponsorship deals, comedian/singer/illustrator Shonduras, tells TechCrunch via text message “I have been dreaming of these analytics for YEARS!! and now that they are here i can honestly say… yes they are good! I have been using them in beta for awhile and have been able to learn a ton about my audience, my male/female ratios on snapchat are significantly different than all my other platforms! which really helps me create content that is better served for my snap audience!”

Creators often had to turn to unofficial third-party analytics providers to get help understanding their audiences. But that could be expensive, provide incomplete data, or require creators to turn over their login details.

Nick Cicero, CEO of social analytics startup Delmondo says the new native analytics are “a win all around. Naturally a long overdue step needed to keep more influencers in the platform who have done a lot for Snap, and it’s a great way to build a more diverse set of premium inventory and targeting data for advertisers.”

By ignoring creators, Snapchat had pushed them to competitors like Instagram and YouTube. But now they’ll have more reasons to keep creating on Snapchat, especially if new monetization opportunities emerge. For example, Twitter eventually acquired social media sponsorship broker Niche so it could support creators and start earning a cut of their deals. [Disclosure: my cousin Darren Lachtman co-founded Niche] Snapchat could similarly get into the sponsorship deal making with big stars, and/or let creators earn a cut of ads that run beside their Stories.

Shonduras concludes that “i will be the first to admit i was done with snapchat and fell away last year. but this is the change that both creators and brands needed to get back on board!! and i hope it works!”