Investors in Indonesia have started a new project aimed at digitizing the kiosk shops that adorn the streets of capital city Jakarta.

Warung Pintar — ‘smart kiosk store’ — helps street vendors revamp their store with a bright and colorful design, and a range of tech that includes a digital POS, free Wi-Fi, an LCD screen, power bank chargers and more. The venture was born out of East Ventures, an early-stage investor that has backed unicorns like Tokopedia, Traveloka, Mercari, and today it announced a $4 million seed round.

That’s pretty impressive for a project that was conceived less than six months ago.

East Ventures’ managing partner Willson Cuaca told TechCrunch that the wheels got in motion when the firm revamped its Jakarta office in October 2017.

“One street vendor was worried we would chase them out because we had renovated our space and made it look nice. ‘Why don’t we help to renovate your kiosk?’ we thought instead,” he explained.

Unlike most other retail ventures, the startup isn’t immediately seeking revenue. The only fee is $5,000 from the vendor, and that is to cover the cost of a new prefab kiosk, which is distinctively colored bright orange with black. Warung Pintar provides all the tech smarts free of charge to help kiosk owners engage with the local community, for example, the Go-Jek and Grab drivers who tend to hang around the kiosk store near East Ventures’ office.

Indeed, after that first vendor said his revenue had grown five-times, Cuaca and his colleagues decided that there was an opportunity. One vendor became ten, and now Warung Pintar has 12 kiosk owners in Jakarta thus far. 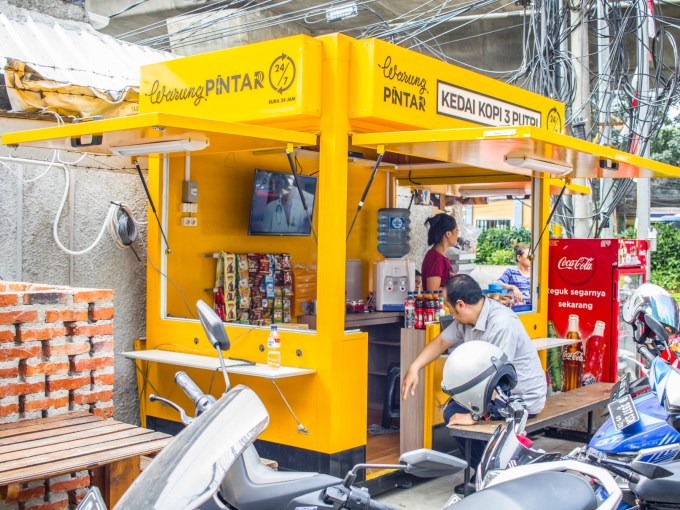 “The whole vision is social impact,” Cuaca said. “We quickly did a seed round and it became over-subscribed, we’re overwhelmed by the response.”

Alongside East Ventures, other investors include SMDV, Digital Garage, Insignia Ventures Partner, Triputra Group, and a number of undisclosed angels. East Ventures’ associate Agung Bezharie moved over to become CEO of the business.

While it isn’t looking to make money right now, the team behind Warung Pintar is assessing the potential to draw revenue without charging the kiosk owners directly. That’s to say that it could take a cut if it can connect financial service providers to store owners, or help to broker other services.

There may also be opportunities to tap online commerce, perhaps to enabling ordering coffee or other goods locally, once the business has established a wider network. The initial focus in Jakarta — via a district-by-district approach — but there are plans to expand across Indonesia, which is the world’s fourth largest country with 260 million people and Southeast Asia’s largest economy.

“For the longest time nobody took care of these vendors,” said Cuaca, who said there are discussions ongoing to extend the financing round further still.

He added that the venture is influenced by the ongoing focus on combining online and offline commerce in China, except while retaining human jobs rather than automating them.