Self-driving and electric flying cars are coming. What this means for our cities in the future is unclear, so I chatted with Uber Head of Policy of Autonomous Vehicles and Urban Aviation Justin Erlich to learn more.

Erlich previously worked under Attorney General Kamala Harris, where he focused on emerging technology and the key policies that the government will want to have in place to ensure technology helps the people of California. During his time, autonomous vehicles were becoming more and more exciting, he said.

“And then there were things emerging with drones and the potential for air travel with people,” Erlich told me on this week’s episode of CTRL+T. “Then I came across this amazing role at Uber where it basically was looking to have someone lead policy for all advanced and emerging tech.”

As head of policy for that division, Erlich oversees essentially everything that’s not Uber’s main ride-hailing division. That includes self-driving cars, the division of Uber that had a major win in court yesterday following a settlement with Alphabet’s Waymo. Erlich is also in charge of policy for drones, freight and VTOL (vertical take off and landing).

The idea with Uber’s air travel, which may be referred to as UberAir, is to cover trips from one point of density to another, Erlich explained to me. The plan for now is to cover no more than 60 miles, which is due to the current limitations of batteries.

To get in your UberAir, you could enter in your destination and then the Uber app would tell you where the closest skyport is located. Then, you’d catch your UberAir to another place that is somewhat close to your final destination.

There are a couple of classic use cases, Erlich said. One is for super-commuting, like going from San Francisco to downtown San Jose. Instead of driving yourself, taking Caltrain or paying a bunch of money for an Uber car to take you all that way, you could hop in an UberAir, which would be a lot faster. Another use case is navigating in Los Angeles, which is a notoriously traffic-heavy city, from the airport to East Los Angeles.

Unlike Uber’s standard offering, UberAir will ideally be a totally shared experience. Part of that has to do with ensuring that the cost of UberAir will be affordable, Erlich said, and comparable to the prices Uber riders are already used to.

“Our hope and belief is that the time savings that you will get through air travel will incentivize people who might otherwise be used to the privacy of their own rides [being game] to share rides,” Erlich said. “If you ask about what’s the future of mobility — like when we have all these people wanting to move — we can think of these as packets of people and things moving in these really dense city areas. Everything will probably need to look like some form of fleets that are run by folks like Uber that are pooled with people sharing rides that are electric and eventually autonomous. I think that’s the sort of vision that we’re working towards both on the ground and in the air. And I think shared rides is a huge part of that.”

Uber’s flying cars are a hybrid between a helicopter and an airplane, Erlich explained to me. I’m really pushing for the “flying car” terminology, but Erlich says it’s misleading and that we need to come up with a better way to describe them.

“It sounds awesome but it almost it conjures up an image of things taking off from the ground,” Erlich said. “And the technology there would be quite difficult and seems pretty far off, whereas I think a lot of these services will be moving from one rooftop to another.”

Instead of UberAir being a flying car, a helicopter or an airplane, you can think of it as a helicopter-airplane mashup, Erlich said. They will have fixed wings to help with gliding, similar to an airplane, to help it be more efficient and go faster. They will also have multiple rotors, while a helicopter has just one big fixed rotor and therefore one single point of failure, Erlich explained.

Those rotors, he added, will use distributed electric propulsion, which was invented by a NASA engineer, whom Uber has since hired. DEP helps to increase fuel efficiency, landing field length and performance handling while reducing emissions and noise. That means UberAir should theoretically be quieter and safer than a helicopter because of those multiple rotors and fixed wings.

“We can sort of imagine it is a much better, quieter, safer, more efficient helicopter. So part of the focus in that area is how do we make this seem more real and sort of capture what is actually the substance of the technology.”

Another part of the focus, Erlich says, is educating people around the benefits of urban air travel, how it’s potentially safer and how it’s not a new concept. In the 1960s and 1970s, there was a helicopter service between San Francisco and Oakland, operated by SFO Helicopter Airlines. At that point, however, it was expensive and not safe enough, Erlich said.

“But this idea of urban air travel isn’t actually as foreign as we might think,” Erlich said. “It just hasn’t happened recently. So part of it is around creating a discussion with communities about what the benefits are, why we think this is safer and getting them excited about what this could be.”

The emergence of UberAir will likely result in a new market involving rooftop rentals. Similar to how ride-sharing services like Getaround and Maven have resulted in small businesses and private homes renting out their vacant parking spaces, we can imagine a world in which office buildings, parking lot structures and even private homes serving as UberAir landing pads.

“I think that the rooftop in the future can be an asset that we can really unlock by allowing new forms of travel,” Erlich said. “I think how that can look pretty different.”

Erlich noted how real estate developers might want to consider building airports and how cities with large parking structures may want to dedicate top floors to VTOLs, given there will be less of a need for parking. 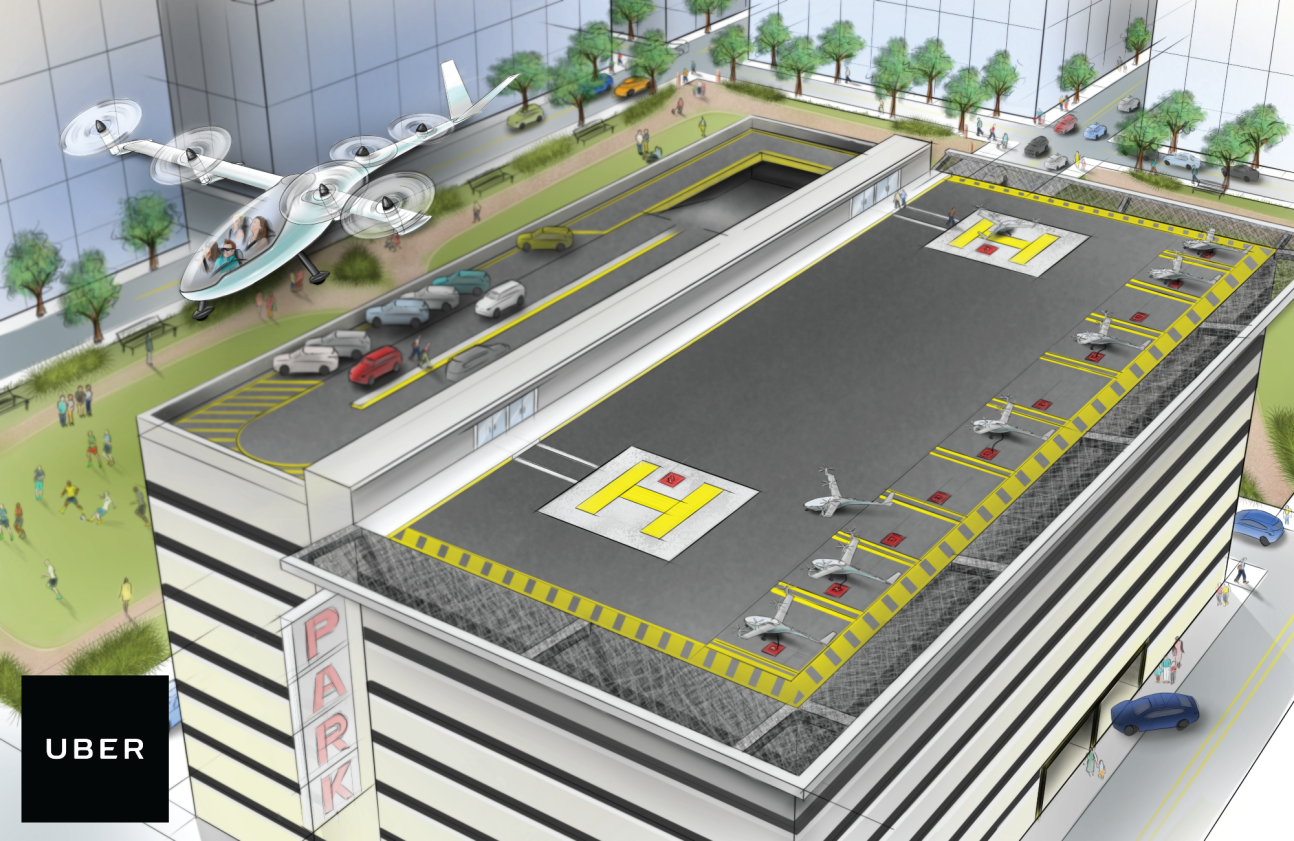 “I think we’ll see a lot of flexibility and what it could look like and, in part, that has to do with our infrastructure needs over the next 10 years, [which] will probably change dramatically,” he said. “Our goal is we want to be as flexible as possible to make sure that we can basically be working with a whole host of partners who will be developing developing this potential infrastructure.”

The plan is to start with real pilots operating UberAir, Erlich said, but at some point, it’ll be autonomous.

“So I think integrating that into the core center of cities, I think will be a really exciting policy topic in the years to come,” Erlich said.

Uber’s ultimate vision is to provide multi-modal transportation both within and between cities. Just last month, for example, Uber launched UberBike in partnership with bike-sharing startup JUMP.

“We’re definitely both looking at trying to meet short term needs and long term needs,” Erlich said. “And that’s one of the things that I think is exciting about the company is, you know, it’s breadth of what it’s trying to think about is certainly certainly big.”

Advances in transportation in cities isn’t always equitable and deployed with equity and accessibility in mind. Instead, transportation technology often gets deployed in ways that have “these wide systemic effects where we don’t totally realize them going in,” Erlich said.

“And so if we look at what happened with cars they completely reshaped our cities. We had suburban sprawl, we had certain neighborhoods being demolished in order to build freeways to build this road infrastructure, and that had obviously a huge impact on equity issues and sort of demographics and cities.”

In an ideal world, UberAir would be able to reach neighborhoods that are traditionally underserved by transit agencies. But in order to do that, Uber needs to remain conscious of the fact that it’s a goal it’s trying to achieve. That means ensuring the right policy infrastructure is in place and that’s where Erlich comes in.

The goal is to continue to bring down costs and move toward autonomous flying in order to offer low enough prices for people who want to travel far, Erlich said.

“And particularly if they’re not able to live in urban areas due to real estate prices that this will help them live further away but not need to rely on personal car ownership.”

You can listen to my full conversation with Erlich here.