Snapchat is finally getting Live video, but you won’t be able to broadcast. Today Snapchat announced it will pipe snippets of NBC’s Live Olympics coverage directly into its app. But when TechCrunch asked if users would be able to go Live, a Snap spokesperson told us on background that there’s no intention to open up broadcasting to Snapchatters. They said users have not been clamoring for Live broadcasting abilities, and the company doesn’t see many use cases for them.

Instead, Snap Inc. says that transmitting live television to help Snapchatters experience culturally relevant moments is what makes sense. Snapchat won’t broadcast whole sports games or award shows, but says that it could stream the most important parts of big events, like the Oscars awarding Best Picture.

This effectively throws shade on Facebook, which has poured resources into building and promoting Live capabilities for users, but has seen very few stand-out broadcasts from those users beyond a woman laughing hysterically in a Chewbacca mask. 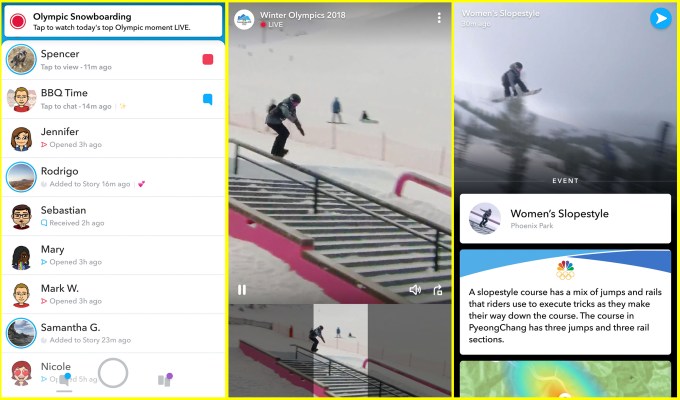 Snap Inc. is rightfully assuming that most users just don’t have interesting enough lives to warrant Live streaming. The feature can generate low-quality notifications that annoy users, which frequently happens on Facebook and Instagram. And even if people open those notifications, the long-form, unskippable content might seem slow and boring compared to the fast-paced clips people are used to on Snapchat.

Snapchat Live for the pros

Snapchat’s special Live video player shows the full horizontal TV stream in the bottom quarter of the screen where users can tap to choose which vertical slice they want to see zoomed into in the top three-quarters of their phone. Users will be able to sign up for notifications about all future Live broadcasts, or just ones about specific sports, the company tells me.

Strangely, Snapchat will show these notifications at the top of the Friends list if someone is subscribed and currently in the app, despite the fact that the big redesign it’s rolling out was specifically designed to filter publishers and professional content out of the Friends section and into Discover. That’s because mobile devices don’t show their typical interstitial or drop-down notifications if you’re already in the app that’s alerting you. Still, it seems Snapchat is happy to bend its new design philosophy in order to give its publisher partners more visibility where users spend most of their time.

Snap is heading into the Winter Olympics with strong momentum after yesterday’s blockbuster earnings saw its share price climb 35 percent today. The secret to its success was focusing on Android and the developing world, which gave Snapchat strong international user and revenue increases, reviving the app’s growth rate after a brutal year competing with Instagram Stories.

Live Olympic coverage from NBC will start streaming into Snapchat on February 10th. There also will be crowdsourced Our Stories from the games and BuzzFeed-produced publisher Stories curating the best on NBC’s footage that include custom context cards with Olympic schedules and medal counts. NBC Sports will also produce two Snap Shows on snowboarders and other competitors.

Big events like the Olympics can pull in giant ad deals and lure new users to Snapchat. But the long-term success of the app depends on the core products, like the camera, ephemeral messages and Stories. Choosing not to pollute those with dull, haphazard Live broadcasts from users could ensure Snapchat lovers stay loyal.