Mitch Goldstone loves photo scanning. His business, ScanMyPhotos, does what it says on the tin: you send photos to the company and, using high speed scanners and special software, his team digitizes your photos, sticks them onto a USB key or online, and sends them back.

He is proud of his business. Thanks to his scanners he’s helped users save their photos from tornadoes, floods, and theft. When the California wildfires rushed through homes he and his team, when they could, were able to recreate photo collections and restore entire photo libraries.

That made him feel good.

This isn’t about his successes, though. It’s about his battle with forces arrayed against a small founder by bigger companies and what he intends to do about it. And it’s a lesson to founders who find themselves against the wall. It’s a story about a digital David against a Google Goliath.

It began with an advertisement.

For a few decades – at least since 1990 – Goldstone and his photo scanning competitors have faced little competition. Scanning massive numbers of photos is hard. It requires time and patience and most hardware available was poorly built and too slow to scan hundreds let alone thousands of photos. So he was sitting pretty.

Scanning hardware is essentially stagnant. The last great innovator – Neat and its specialized document scanner – has gone out of the hardware space entirely and only Epson and Fujitsu are the major brand names making and selling consumer scanners. Out of what was once a mighty industry, these two survivors kept going by making simpler, faster scanners for DIYers and lowering prices to rock bottom. After all, why buy a scanner with iOS contains one for free?

Epson launched its FastFoto line in 2016. The claim was simple: these new scanners were the world’s fastest “in their class.” It was a DIY photo scanner aimed at home users that was priced under $1,000. They cost about $650 – far more than the average scanner – but they let you scan in all your photos and cut out the middle man. Epson claims that the latest model, the FastFoto FF-640, can scan up to one photo per second. It makes that claim in Google advertisements that were placed against Goldstone’s company.

These claims are fine if a bit misleading, said Goldstone, a trim man who has the calm demeanor of an East Coaster who moved to sunnier climes to pursue high-tech dreams and won. DIY photo scanning is hard, he said, and requires far more than a fast scanner. His business offers the “everything else” you need to get the job done. Worse, he claims Epson is spreading false advertising and that the company is also directly targeting his photo scanning business with its claims. 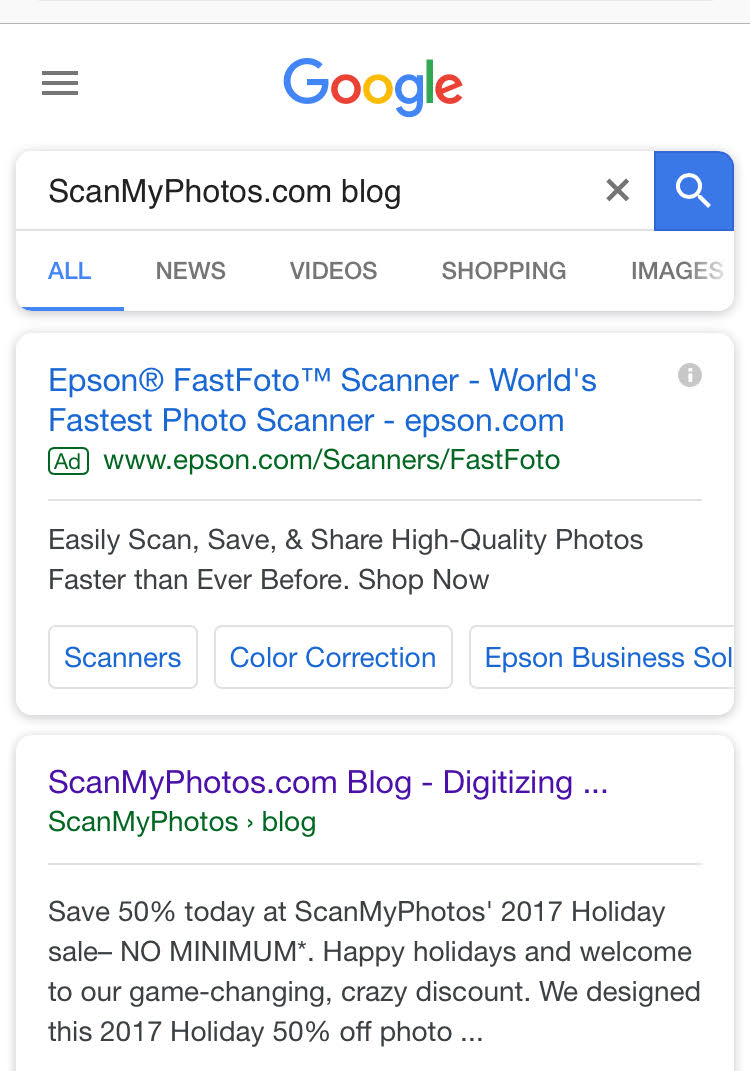 “Although Epson leads consumers to believe their scanner is more efficient,” said Goldstone. “The reality is it could take hours or days for an amateur consumer to take on this DIY project to digitize pictures, rather than with our more efficient and cost-effective services.”

Finally, Epson is also hurting his bottom line, something Goldstone can’t abide. He knows he makes a good product.

“Ever since last Fall’s Epson FastFoto FF-640 launch, sales at ScanMyPhotos have been diminished,” he said. “We believe that upwards of $150,000 in monthly sales may have been lost due to the misleading claims by the giant manufacturing conglomerate. Having pioneered the bulk photo scanning business, we have digitized 500 million pictures. In the case of Epson, consumers are thinking they are buying the fastest scanner, yet are out over $600 before scanning their first picture.”

Further, the scanning giant Epson doesn’t quite seem to know or really care where it’s ads appear. I asked Epson for comment and they were nonchalant about the placement.

“Epson America does use Google AdWords (as do other companies in the industry) across product lines using relevant industry search terms/competitive search terms,” said an Epson spokesperson. “Google serves up a variety of ads in this process, but all FastFoto ads link to the FastFoto landing page, where the claim is explained and supported.”

So the ads appear against Goldstone’s own ads and they suggest, in no uncertain terms, that Goldstone is replaceable. Goldstone doesn’t like that.

Goldstone is a consummate marketer and loves being a thorn in the side of big business. In 2005 he led a class action lawsuit against Visa and MasterCard for fixing swipe fees that merchants in the US paid card companies. He won a $7.24 billion settlement on behalf of merchants. It was the biggest private antitrust settlement in US history.

He is also more political than the average photo-scanning CEO. In 2016 he wrote about his lost love of Trump the businessman and complained bitterly about Trump the politician. In each of those cases he aimed to help the little guy in the face of implacable odds. Now he’s the little guy.

He’s contemplating a lawsuit against Epson, citing previous cases to boost his position. After all, lawyers proved that Red Bull does not really give you wings. Therefore class action lawsuits against false claims aren’t uncommon. But, more than anything, Goldstone wants to set the record straight.

Why should we care about all of this? Because in founders there a constant feeling of aggrievement and unfairness is the norm. Some days funding doesn’t come through for mysterious reasons. Competitors steal markets. Products are eclipsed by other products. And, in almost every case, a small business can’t cope. Many businesses would go under if a competitor tore $150,000 a month out of their bottom line. For many businesses, in fact, $150,000 is enough to keep them afloat for a year and that loss is deadly.

Therefore, even though Goldstone is successful and his business, by all rights, is still going strong, he’s still pissed.

“False advertising has consequences, even for one of the largest companies in the world when they harm small entrepreneurial businesses,” he said. “People seeking a quick way to digitize their pictures are thinking if they buy a DIY scanner, they are getting ‘the world’s fastest scanner.'”

“Epson’s false and misleading statements are causing consumers to become confused, choosing instead to buy a DIY scanner while misdirecting them away from choosing ScanMyPhotos.com. Particularly at this time of year when many consumers are looking to get family photos digitized as gifts, the confusion is causing many to buy a different gift then they thought. I fear that my company will lose substantially more business at this important time of the year for all businesses.”

Epson doesn’t have to do anything Goldstone asks. They’re caught in an age-old battle of business competition. But Goldstone thinks things are unfair and he wanted to set the record straight. And he’s like any other founder out there: dedicated to his business and in love with his customers. He wants what’s best for them (and he wants his $150,000 a month back).

In this season of giving, Goldstone wants Epson to give him a break. Whether that happens or not is still unclear but he’s been down this road before and won. Ultimately, he said, this is about keeping memories safe. When it comes to that he thinks the human touch is still the best.