A lot of crap gets shared on Facebook, but coming soon the volume may be a little less after Facebook made a move to penalize content that shamelessly begs people for engagement.

The social network giant said today that it will penalize Page owners and people who resort to “engagement bait,” which means posts that encourage users to like, comment or tag people in the comments section in order to gain wider visibility of their content.

The incentives — such as “Share with friends to win a free trip” or “Like if you’re an Aries” — gets content shared through engagement, ultimately helping the post, and the Page owner/author, grow its reach as users interact and it shows up on their friends’ Newsfeeds.

Not so now. A new tweak to the Newsfeed algorithm will mean “stricter demotions” for Pages, and/or individual, who adopt engagement bait tactics. Starting in a couple of weeks, offenders will have the total reach on all of their posts reduced if their content is begging or baiting users to interact. As you’d expect, serial offenders will be hit hardest.

But, Facebook is extending an olive branch and — initially, at least — engagement baiters can earn their original reach back with good behavior, i.e. less of the sludge and ‘better’ content all round. 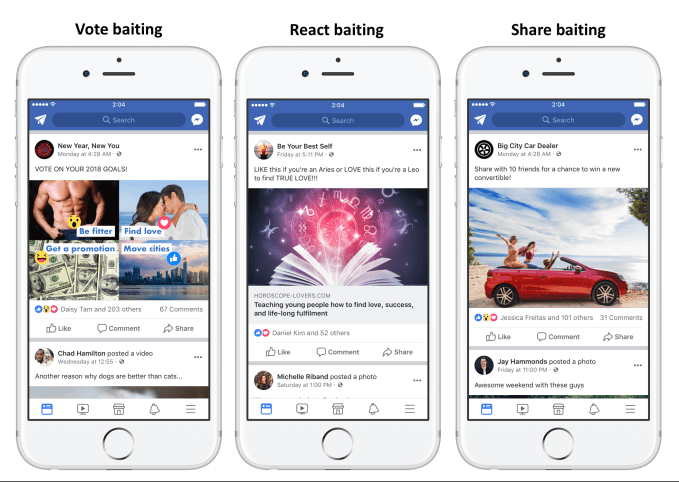 Facebook did specify that there are some exceptions to this clampdown, and that includes examples like a missing child report, raising money for a cause, or asking for travel tips, to quote the company directly.

The crackdown itself is led by a machine learning model that the social network said has been fed “hundreds of thousands of posts” to detect different kinds of engagement bait.

This push to close down some of the spammier types of content follows a clampdown on sites with crappy web experiences — for example those caked in advertising — and moves to weed out clickbait in multiple languages.

Facebook is, of course, still answering tougher question about the overall impact that its service is having on society across the world. In addition to explaining how Russian actors used the site to try to manipulate the U.S. general election and the UK’s Brexit vote, it is also being criticized from former executives who accuse it of “destroying how society works.”