As of this morning, Apple Maps has expanded to include indoor layouts of 30 airports across the globe. The company has primarily hit American cities thus far, covering what looks to be most of the big cities across the contiguous U.S. There are some key international airports, as well, including Hong Kong International, Amsterdam, Geneva, two in London and Berlin and a handful of Canadian locations.

It’s a big roll out, all in one fell swoop, that appears to have taken quite some time in the making. Each location requires close cooperation with airlines and the airports themselves, along with in-person surveyors. People have been recording the data in-person — sort of a human stand-in for those street mapping cars that Apple and Google deploy to get a lay of the land.

If an airport is included in the list, it will now sport the words “Look Inside” on the map. Tapping that will pop up a bird’s-eye view layout of the inside of the terminal. It’s that standard mapping grid view — in spite of sending human surveyors to collect data, there’s nothing here akin to Satellite or Street View. Not that most airport terminals are really all that much to look at in the first place. 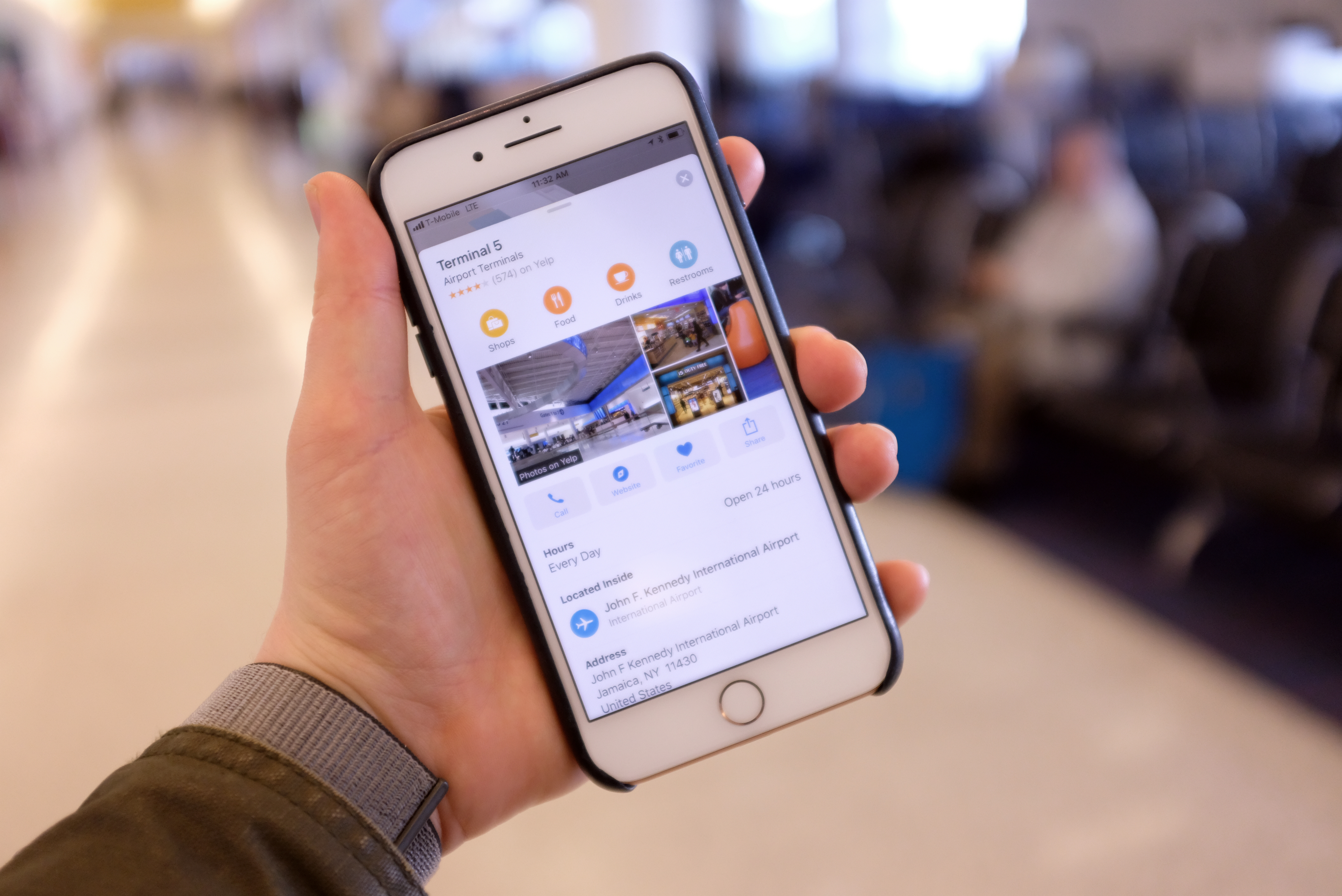 The grid view highlights each gate in yellow, with a few key destinations populating the map — things like check-ins, baggage and airport lounges. Drilling down from there reveals other spots in more detail, including restaurants, restrooms and the like. Tap on a restaurant, for instance, and you’ll get a tab with data just like you would outside the airport. It offers the terminal name and floor number, phone number, hours and reviews pulled from a third-party review platform like Yelp.

Tapping on the number in the upper-right corner toggles between terminal levels. Swiping up with two fingers, meanwhile, offers up a 3D view of the space, with added depth. This lay of the land was gathered using CAD files provided to Apple by the individual airports, to give the user a better sense of place while wandering around the terminal.

We had the opportunity to test the new feature at JFK’s Terminal 5 earlier today, which was like going through all of the travel rigmarole without actually getting to go anywhere. I will say, however, that I was pleasantly surprised at how good a job the system does triangulating a phone indoors. The location accuracy is within a couple of meters, which is impressive inside, where GPS data is a crapshoot, at best.

Apple accomplishes this by using Wi-Fi points throughout the terminal. That triangulation is equally accurate whether or not you’re on the Wi-Fi — which I suspect many travelers aren’t, given the number of airports that still charge for access. 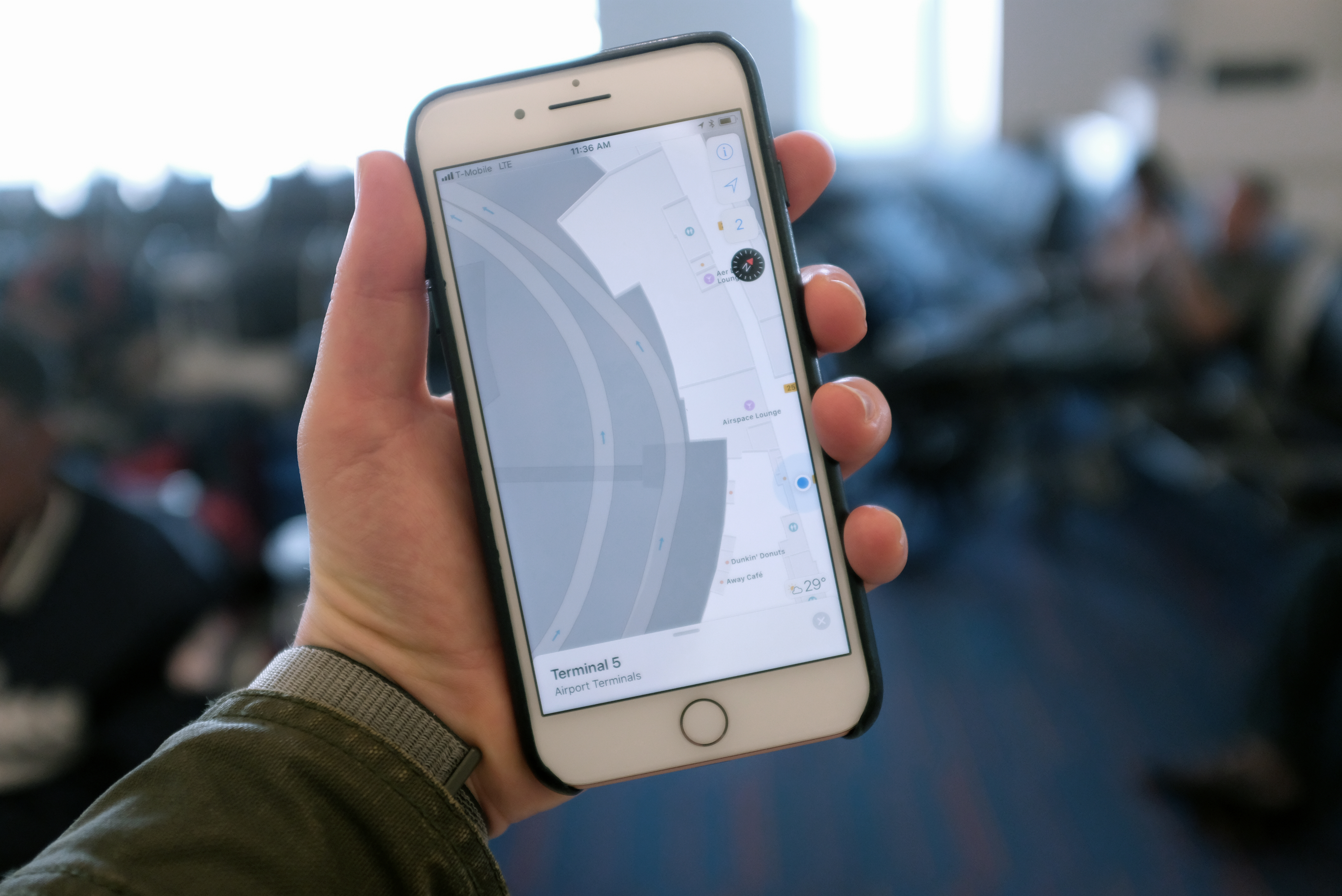 It should prove a handy feature for those planning out an hour or two in the airport — time I tend to spend wandering down terminal halls in search of slightly less terrible food options. There’s still a lot of room for potential growth here, too. After all, Apple has started incorporating flight data into other pieces of iOS, so this would be a no-brainer.

Being able to see which gate a flight is leaving from directly inside the map app could be supremely useful. Ditto for figuring out which carousel your luggage is on. No word on when that information is coming — that after all, is a pretty unwieldy additional stream of data layer to add in.

Meantime, you can find the full list of participating airports on Apple’s site.