Nigerian based SureRemit has launched a crypto token aimed at money sent home by global immigrants.

The startup — which is incorporated in Mauritius — offered pre-sales of its remittance focused tokens this week, before a January 2018 ICO. SureRemit will use blockchain partner Stellar’s platform.

The company is connecting its crypto product — which is not redeemable by consumers for cash — to a network of pre-approved merchants in Nigeria, Kenya, and Rwanda. SureRemit plans to launch in India and the Middle East in the second quarter of 2018.

Clients can use SureRemit’s app to present tokens as payment for things such as utility bills, student tuition, and online consumer goods. African e-commerce giant Jumia is among its merchant partners.

There’ll be no purchase or transfer fees for the tokens above face value. SureRemit will generate revenue from businesses, who pay a percentage on each token transaction, and then redeem the tokens (less fees) for cash from SureRemit.

SureRemit’s merchant network — according to co-founder Samuel-Biyi — views the fees as the cost of accessing a new pool of customers. “We’re a big channel to connecting them to the multi-billion dollar market of remittance inflows,” he said “So our model is transferring costs of remittances to the merchant side away from the sender side.” 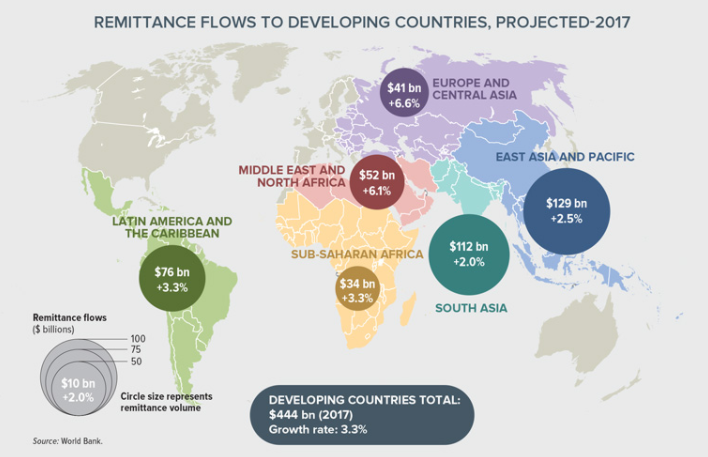 Remittances — and the high fees charged by money transmitters such as Western Union and MoneyGram — represent an enormous pool of global capital. According to World Bank stats, roughly 250 million global migrants transferred $601 billion to their home countries in 2016. More than half, $441 billion, went to developing countries: $39 to Sub-Saharan Africa, $69 billion to India, and $20 billion to Nigeria.

On global remittance fees, Sub-Saharan Africa pays the highest fees — roughly 10 percent per $200 — of any other region.

One of SureRemit’s backers, 500 Startups, sees these high transfer costs as a disruptive opportunity for the venture. “The fees are horrible, and Western Union is ripping off people who can least afford it,” said 500 Startups Partner, Marvin Liao. “It’s a huge market…and a lot of these basic financial and commerce needs that people have are still not being addressed effectively,” Liao said of the potential for SureRemit’s crypto token product in Africa.

On the regulatory side, SureRemit’s Samuel-Biyi sees less risk of their crypto token product being used for money-laundering compared to other block-chain payments systems, such as Bitcoin. “Because it’s not cash redeemable and tied to particular merchants…one would not be able to transform tokens to cash that easily. This makes it an unattractive money laundering channel,” he said.

To the question of why consumers would use SureRemit’s crypto tokens versus other blockchain finance products, Biyi named “speed and cost” as competitive advantages. “Remit tokens ensure zero-cost, high-velocity cross-border transactions, which Bitcoin is not currently optimized for,” he said.

SureRemit has already proven market demand for cashless consumer payment and merchant programs through its predecessor, SureGifts product. SureGifts customers purchase digital shopping vouchers via e-mail or SMS, and use them for payment at 300 partner merchants in Rwanda, Nigeria, and Kenya. SureRemit plans to leverage this network for its new remittance focused crypto token.