Health2Sync, a Taiwan-headquartered company that offers a diabetes tracking service, has closed a $6 million Series B round aimed at expanding its business in Japan and other markets in Asia.

Health2Sync launched at the TechCrunch Hardware Battlefield at CES 2014 and it essentially offers a smarter way to track and manage diabetes. Using a BlueTooth dongle, Android and iOS devices can be connected to a glucose meter which then populates data inside the Health2Sync app. The company formerly offered a headphone jack cable but smartphone trends forced a change.

“The problems we are trying to solve are the lack of data around diabetes tracking, and the shortage of diabetes practitioners in this part of the world,” CEO and co-founder Ed Deng told TechCrunch in an interview.

“The service kicks in when data is the smartphone. It can run analytics and give feedback, while patients can log data like food and medicine intake and exercise,” Deng added, explaining that integrations with blood pressure meters is planned for the future.

The results are impressive. The four-year-old company claims that the average blood glucose of high-risk users decreased by 22 percent after they used its service for three months. That, in turn, can help lower complications and reduce health issues. 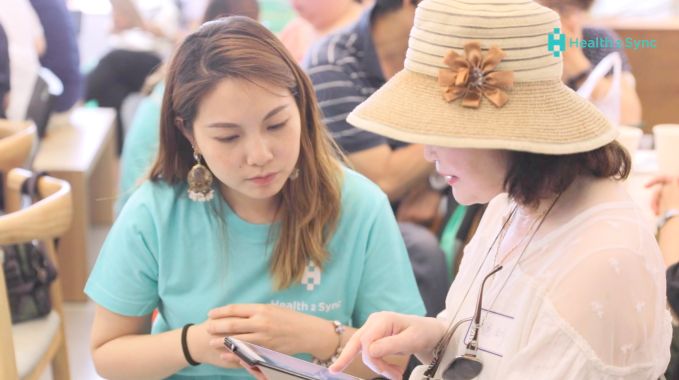 Health2Sync previously raised a $3 million Series A round in August 2016 and now this $6 million Series B will go towards expansions. While the app can be used anywhere, Deng said the value is strongest in markets where it has local partners — including pharmaceutical companies, insurance firms and its own community — and right now that is Taiwan and Hong Kong.

Japan is the world’s second largest market for spending on diabetes care, behind only the U.S.. which explains why Health2Sync is making this expansion. That’s where its relationship with Sompo Holdings, the Japanese insurance firm which led this Series B, will come into play.

“Sompo has a healthcare-focused digital subsidiary, and it understands how important taking solutions online can be,” Deng said.

The duo hope to offer specialized insurance packages to diabetes patients in the future. Existing backers Alibaba and WI Harper also took part in the funding round.

Asia as a whole is estimated to account for 60 percent of the world’s diabetes, while the number of sufferers reached a record 10 million in Japan last year. Beyond Japan, Health2Sync is aiming to grow its presence in Japan and it is hiring its first employees in Malaysia and Indonesia as it plans a push into Southeast Asia. The company said it has worked with public and private organizations to reduce the price of diabetes care in Taiwan, Hong Kong, Malaysia and Singapore.