Some of the biggest names in technology are all in on voice-controlled devices like the Amazon Echo and Google Home, but Roxy, a Seattle-based startup believes that businesses need a voice system where they control the data and the voice commands are designed for their specific requirements. They announced $2.2 million in seed funding today.

The company has built its own modular hardware and software combination and believes that by giving businesses a product geared to the needs of a particular industry, they can carve out a niche within the realm of technology’s biggest companies.

The company’s founders include Cam Urban, formerly of Microsoft Azure who has a couple of startups on his resume, Peng (“Michael”) Shao, who led the speech recognition team for Amazon Alexa and Le (“Grace”) Huang, who was a software engineer at Amazon.

Roxy is not just creating customized software for their customers, they have also built their own modular hardware that can expand or contract to include things like USB ports, a screen or speakers. How that hardware is designed will depend on the use case. In hotels, it will get everything, while in supermarkets, the USB ports would be stripped out. 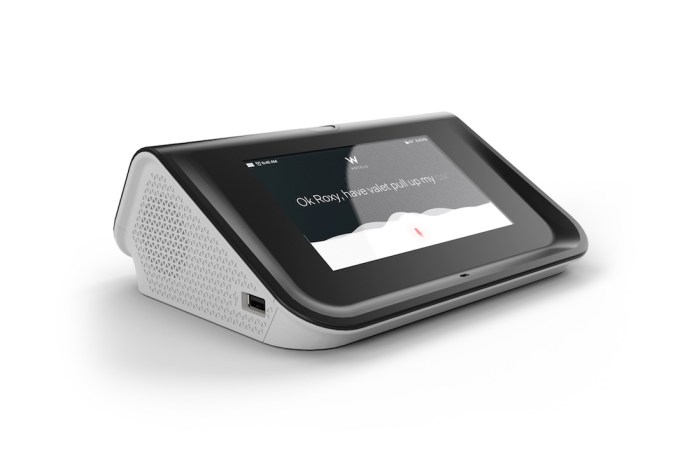 As for the software, they can customize it for each business type and even location, allowing the customer to control the types of interactions that their customers have with the device, and perhaps most importantly control the data instead of sharing it with the technology giants.

“Something that I didn’t expect is that a lot of these companies don’t want their data in Amazon or Google’s hands,” co-founder and CEO Cam Urban told TechCrunch. His company’s system leaves the data in the control of the customer, which is a big deal.

For starters, Roxy is concentrating on hotels and already has 10 paying pilots at west coast hotels. In the case of hotels, the voice commands are all geared towards the types of questions you would call the front desk to get answers such as asking for room service, check out times, fresh towels and the hours the pool is open. The hardware is built to replace a bunch of the equipment you find in the typical hotel room from an alarm clock to speakers to USB ports — and even a telephone. The Roxy can take care of all of that. The problem becomes, how do you educate people who lack technical savvy to use a device like this instead of picking up a phone? Conversely, how do you get people used to interacting with a general purpose device like the Amazon Echo to learn this is designed to answer a limited number of questions.

Urban says they needed to learn how to educate the guests, who are often only there for a brief period of time, but they included the screen in part as a way to train users on a device they wouldn’t be familiar with. The goal is to get the device to answer within three interactions.

Since many hotels have ancient legacy systems, they have created light-weight versions of the software and help customers hook into their existing systems. Urban says that experience is in fact another differentiator between his company and the big vendors, who are geared to more general experiences and lack the specific understanding of each industry and their requirements.

Over time, the company has a roadmap to move beyond hotels into other areas like airports, supermarkets, museums and hospitals.