Dropbox announced a couple of products today to make it easier for Autodesk users to access and share large design files. The products include an integrated desktop app for opening and saving Autodesk files stored in Dropbox and an app for viewing design files without the need for owning Autodesk.

These products are long overdue given that Dropbox’s Ross Piper, who is head of ecosystem and developer platforms, says they have 1.5 billion (with a B) Autodesk files stored in Dropbox with 85 million being added every month, an astonishing number considering the size and complexity of these files. But it is precisely because they are large and complex that a cloud storage solution is a compelling idea.

The companies decided to partner to help make working with these files an easier and more streamlined undertaking.

The Dropbox desktop app, which will be available starting today, enables Autodesk users to open and save .dwg design files in the cloud directly from the AutoCad application. Users simply open these files directly in AutoCad, and they are pulled from Dropbox, and open as normal. When users are finished working on the files, they are saved back to Dropbox automatically.

In addition, Dropbox also announced a native viewer app, which is coming soon, which will enable Autodesk users to share design files with users who don’t own the Autodesk software. What’s more, these users will be able to comment on the files, making it easier for architects and project managers to share changes even when contractors, customers and other interested parties don’t own the core product.

For instance, you can look at an architect’s drawing and select a room or area, then comment specifically about that area. 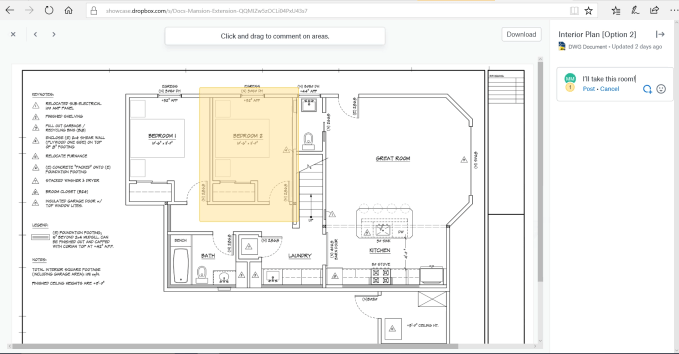 Users can download these new tools from Autodesk’s AutoCad App Store, install them and they are good to go.

This announcement is part of a broader play by Dropbox to have third-party partners like Autodesk integrate the Dropbox product more directly into business applications where people are doing work, rather than having to open Dropbox explicitly to grab these files.

It’s worth noting that Box has had a similar partnership with Autodesk in place for a couple of years.