This is the Xbox One X. It’s the fastest and smallest Xbox and the first to offer games in 4K. At $499 the higher resolution comes at a steep price. After a week with the console and hours of gaming, I can firmly state the Xbox One X is the best Xbox to date. This Xbox has everything.

Think about it. The Xbox One X is the culmination of the Xbox project and, right now, at this moment in history, the system is not missing a critical feature or capability. I’m happy to report it performs as advertised, too. It’s fast, smooth and capable of playing games from the past and the present with the best possible graphics.

Even though the Xbox One X provides the best possible Xbox experience, it may not be a system for everyone.

The Xbox One X is the third version of the third generation of the Xbox. The original came out in 2001 with the Xbox 360 hitting stores in 2005. The current generation started in 2013 with the Xbox One. The Xbox One X shares a lot of similarities with the first Xbox One yet lacks a feature of the original: Kinect. Microsoft once bet the future of the living room on motion and voice controls. Here we are, some four years later, and the Kinect is dead, and the controller stands tall.

With certain games, graphics pop and colors shimmer in a way that was not possible on past consoles. The jump in quality is significant with the One X. The increase in quality feels more like the jump from the 480p Xbox to the 720p Xbox 360 rather than the jump from the 360 to 1080p Xbox One.

Simply put, gaming at 4K is brilliant. Gaming at 4K with a faster refresh rate is even better, and this Xbox throws down. Games optimized for the higher resolution and quicker refresh rate look better and play smoother. Likewise, games that are not optimized still benefit from the One X’s extra power with faster load times and improved graphics. I guess. Sometimes I felt older Xbox One games were performing better on the One X than the One S but that could have just been because I was using an Xbox that wasn’t pulling from a full hard drive.

New games like Gears of War 4 look stunning in 4K and at 60 frames per second. I found the graphics nearly as good as anything available on a PC. Even during the most intense firefights, the gameplay was beautifully smooth. This wasn’t always the case. Sometimes with past systems there was a bit of slowdown when the action sped up. I played latest Gears last month and yet I played through a good chunk again — for TechCrunch’s readers, of course — and for the first time in a Gears game, felt like the system had enough headroom to provide the smoothest possible experience.

I literally said “wow” during the opening fight scene on Gears of War 4. I had played the game since it was released last month, so it felt like the right place to start. The game is already gorgeous, and even on a One S, the gameplay is smooth. However, on the Xbox One X, the gameplay is smoothed out to a silky experience. 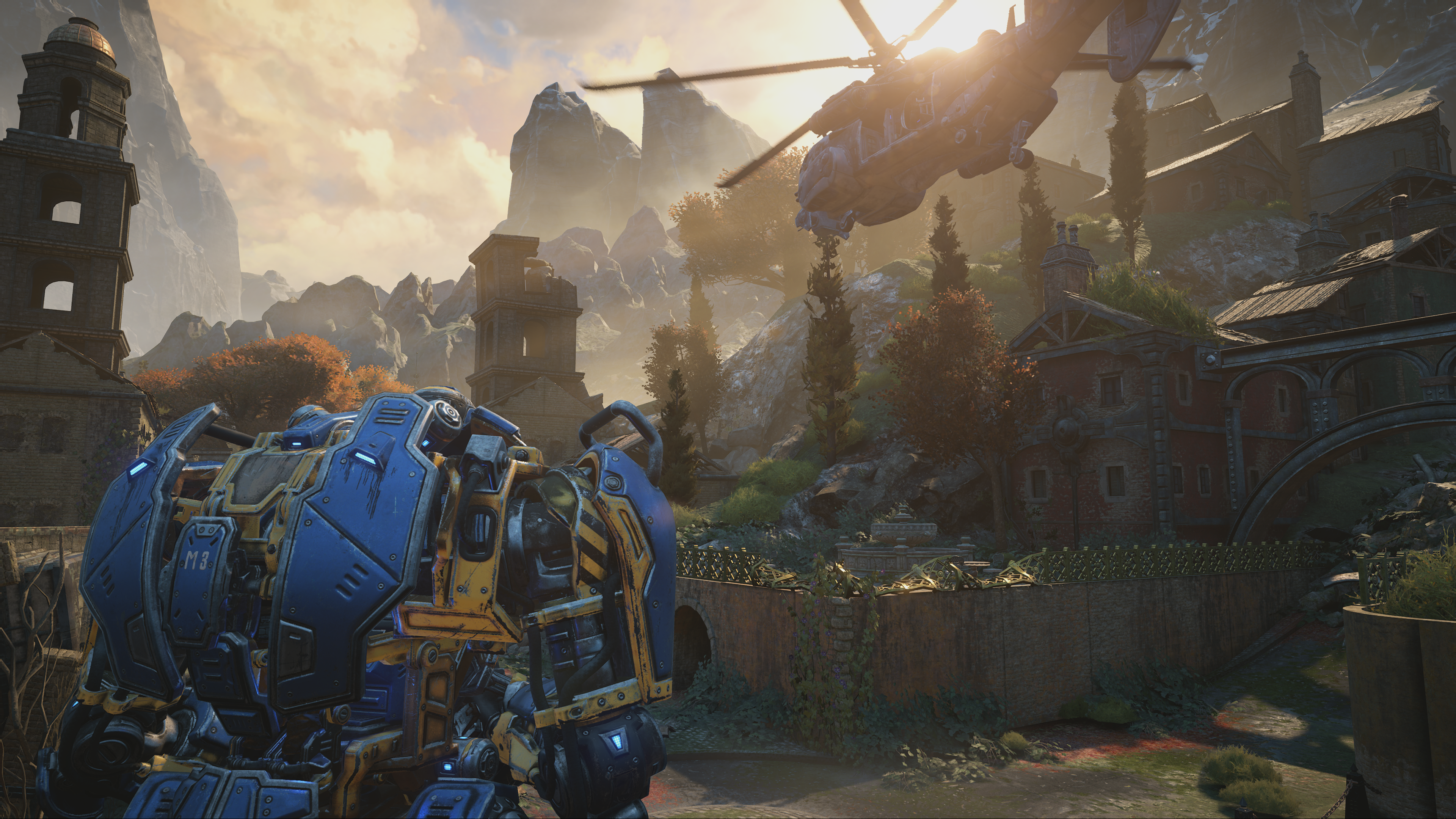 This is how good Gears of War 4 looks while you’re playing it. Seriously.

All the graphical improvements can be complicated.

For Gears of War 4, players have several options. In the game’s setting menu, players can select between Visuals or Performance modes. Select Visuals and the game plays in 4k at 30 fps (the pretty mode). The Performance option bumps the framerate to a 60 fps target and keeps the resolution at 1080p (the smooth mode). But this switch is only for the campaign mode. The Horde mode plays at 60 fps in 4k with adaptive resolution scaling to maintain the high frame rate.

And these options are the settings for just Gears of War 4. Each game offers different settings and modes and some do not offer any at all.

That’s just the start of the confusion. Other games have been updated to support HDR that provides a broader swath of colors and contrast. HDR lets bright parts of the picture look more vivid and dark parts look darker while serving up more colors in between. Only some games output HDR and 4K and some games support HDR or 4K. It’s a confusing mess, and the consumer will suffer.

Games like Gears of War 4 were updated to support both 4K and HDR. Others like Halo 5: Guardians or Killer Instinct only support 4K and not HDR. As a consumer, I find the situation insulting and a drawback to buying the console at launch. Eventually, most games will support at least 4K but until then, gamers will need to suffer through Microsoft’s growing pains of convincing developers to release games in 4K.

Microsoft is smart to point out that the extra power inside the Xbox One X improves the graphics even on a 1080p display. If patched for the hardware, these games look marginally better on older displays.

Sometimes the differences are inconsequential for a person with a 1080p display and a One X. Most users would be hard pressed to notice the difference outside of a few games. On the home screen, the One S performs as well as the One X thanks to the new UI Microsoft rolled out last month.

It’s important to note that the Xbox One X does not automatically make a game 4K. And of course the system has to be hooked up to a 4K TV. Moreover, some 4K TVs offer HDR for better color and faster refresh modes for smoother graphics. It gets complicated. There are many variables, and these variables can be expensive.

Users can search for 4K games through the online Store, but some of the results are not 4K games. To check if a game is available in 4K users must click through and consult the Capabilities box on the game’s product page. It’s a tedious process and Microsoft would be smart to add a label to the title’s box art that’s displayed when browsing the catalog.

Sony had a similar issue when the PS4 Pro launch, and it seems like Microsoft is handling it slightly better. The online listing is easier to parse and displayed more prominently. When it comes to retail availability right now, it’s just as hard to find a 4K Xbox game as it was a PS4 4K game. Eventually Xbox games will sport a label on the back of the title displaying its graphical capability but the stores I visited are still working through back stock and have yet to get titles with the new labels. I checked two Best Buy Stores and Forza 7 was the only game labeled as 4K capable. The selection will improve over time but it might be hard around the holidays for mom and dad to identify 4K games to buy for your new 4K gaming system.

Microsoft proudly proclaims the Xbox One X as the most powerful console ever. And by all accounts, that’s true. It packs more computing power than the PS4 Pro, which until now, held that title.

Listen, the Xbox One X is the best Xbox a gamer can buy. Hands down. It’s smoother, quicker and smaller than the Xbox One S. If the One X replaced the One S at the same price, it would be easy to recommend. With the One X priced at $499, for most people, the $279 Xbox One S is the smarter way to spend money. It offers, in most cases, a similar gaming experience and, in a few cases, slightly less pretty graphics – which you definitely won’t miss if you aren’t running a 4K-capable display, or viewing your set from the proper distance.

Purchasing the Xbox One X right now is an investment. 4K TVs are quickly becoming the standard and now that Microsoft and Sony offer 4K systems, eventually developers will start designing games with 4K as the standard. There will be a time when 1080p is an afterthought and that’s when the Xbox One X will be justified. And by then, the Xbox One X’s price will probably be lower and 4K games will be easier to find.

When the Xbox 360 came out, it was a runaway hit. The difference between the Xbox and the Xbox 360 are massive. Then the $500 Xbox One came out and the difference was less dramatic over the Xbox 360. The $500 Xbox One X is an even less meaningful jump in quality over its predecessor and gamers will have a hard time justifying purchasing a One X over a One S. To me, it’s not worth it. At least not right now. If you’re the person who needs the best Xbox possible, the One X is the system for you.