Russian information troll farm the Internet Research Agency spent just 0.05 percent as much on Facebook ads as Hillary Clinton and Donald Trump’s campaigns combined in the run-up to the 2016 U.S. presidential election, yet still reached a massive audience. While there might have been other Russian disinformation groups, the IRA spent $46,000 on pre-election day Facebook ads compared to $81 million spent by Clinton and Trump together, discluding political action committees who could have spent even more than that on the campaigns’ behalf.

Without counting PACs, the top campaigns spent 1,760X more on election ads than one group of Russian meddlers puts the situation into context. The IRA ad buy was small by comparison. This aligns with Stretch’s main talking point that Russian propaganda content was a tiny fraction of the content and ads seen on Facebook. This revelation could put more focus on organically posted propaganda.

[Update: However, since the IRA was using incendiary, divisive, eye-drawing content about polarizing issues, it likely was able to squeeze more impressions and engagment out of each dollar of spend than Trump and Clinton’s ads driving awareness for the candidates That’s because Facebook’s ad auction system preferences engaging ads by providing lower rates. By focusing on hot-button issues and playing into people’s biases, the IRA’s ads got widely re-shared for free by viewers.] 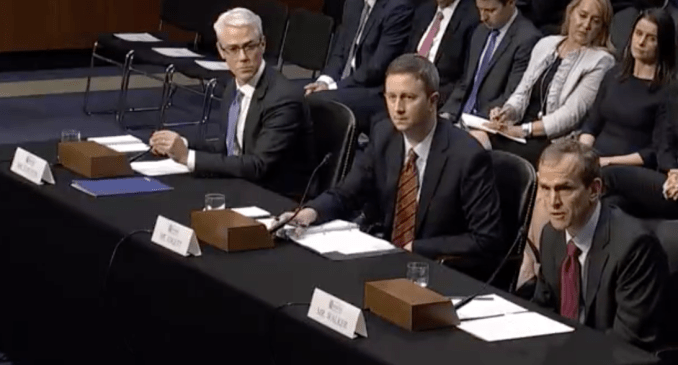 Are More Russian Trolls Still Out There?

Stretch says that the IRA was attacking the election as early as 2015. But one major issue is that there could still be other unidentified Russian groups that also tried to interfere with the 2016 election.

Stretch, Twitter general counsel Sean Edgett and Google’s general counsel Kent Walker all agreed that their investigations are ongoing, so they can’t be sure they’ve identified all active measures of disinformation implemented by the Russians. That’s in part why Congress asked the companies to retain all data relevant to their investigation beyond the 11 month requirement of media organizations that run election ads.

Facebook, Twitter and Google looked ill-prepared when asked if they’d calculated how much revenue they’d earned off of legitimate ads that ran beside Russian organic propaganda content. None could say how much they profited off distributing non-ad Russian election interference.

Throughout the hearing, there was little substantive talk of regulation for social media election ads beyond mentions of the Honest Ads Act that’s in the works. Most of the senators instead spent their time handing out reprimands for past failures, and bleating about how important the issue was rather than putting forward new solutions.

Senator Richard Burr closed the session asking the companies to prevent disruption of America’s future, abide by Federal Election Commission law, and that they should request anti-trust waivers if they need to further cooperate with each other. It will indeed require a joint effort and strategy sharing to defeat election interference, especially if Facebook, Google and Twitter want to avoid heavy-handed regulation.