Cult football simulation game Football Manager has taken an historic step with the introduction of support for gay players in its next launch.

The upcoming 2018 version of the franchise, which typically generates over one million sales per year, will for the first time see players to come out in the game. Sports Interactive, the company behind the hit, said the feature will only apply to ‘newgen’ players — fictional players who are released into the game every season — to prevent the company being sued. Likewise, it won’t apply to players who are from countries where being homosexual is illegal.

“It’s not a message that everyone is going to see in their game. It is quite rare, but we want it to be seen as a positive thing,” Sport Interactive’s Miles Jacobson told the BBC.

“Being gay is just a totally normal thing in life, and it’s the right thing to put it in the game because it’s something that we’re going to be seeing in the future,” he added. 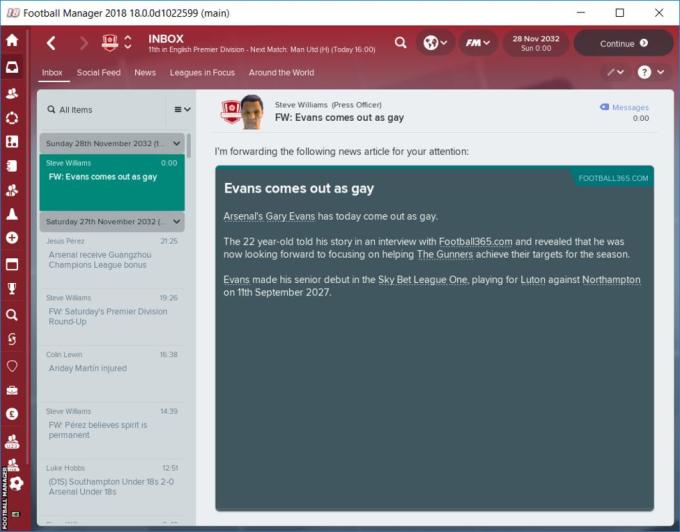 I wasn't expecting this to be found so quickly but yes, it's real. And you get a nice little merchandise boost if it happens in your save 😃🌈 https://t.co/sceRnqCOzo

‘The future’ is very much the operative term because homosexuality is a taboo word in football — at least in the mens professional game.

Jacobson and his team are hoping to do their bit to make it easier for players to come out. To date there have been few high-profile examples.

Austrian international Thomas Hitzlspergler became the first English Premier League player to come out as gay less than a year after his retirement in 2013. Capped U.S. player Robbie Rogers said he had no choice but to quit the game when he announced he was gay 2013, though he has since returned to the professional ranks with the LA Galaxy.

“I find it weird that it’s still a problem in football so we decided to try and show people that coming out isn’t a big deal and can be a positive thing,” Jacobson explained. “I just think it’s crazy that in 2017 we are in a world where people can’t be themselves.”

This isn’t the first time that the Football Manager series has embraced topics outside of the sport. Last year’s installment incorporated Brexit using a system that included a range of scenarios which varied from game to game with had differing impacts on the professional soccer industry in the UK.