In response to concerns that Russia used Facebook ads in an attempt to influence last year’s presidential election, the social network has said it will increase transparency by allowing anyone to see any ad run by any organization.

Now it’s releasing a few more details about its plans, like the fact that the new transparency features are expected to go live next month. Once they do, when you’re looking at a Facebook Page, you should be able to click “View Ads” and bring up all the ads that Page is currently running. (You can see an example of a View Ads page at the end of this post.)

Facebook says it’s starting out with a test in Canada. When the feature expands to the United States, it’s also supposed to include an archive of ads related to federal elections, covering “a rolling four-year period” that starts at the launch of the archive. And it will include additional information like the total and average amounts spent on ads, the number of impressions an ad received and the demographics that were targeted.

The company also says political advertisers will have to verify their identity, their location and the fact that their ad is election-related. The ads will come with a “paid for by” message that you can click on for more information. And Facebook says it’s building machine learning tools so that it can find the political advertisers who don’t identify themselves.

Will most Facebook users take advantage of these capabilities? Maybe not, but vice president of Ads Rob Goldman writes, “Transparency helps everyone, especially political watchdog groups and reporters, keep advertisers accountable for who they say they are and what they say to different groups.” 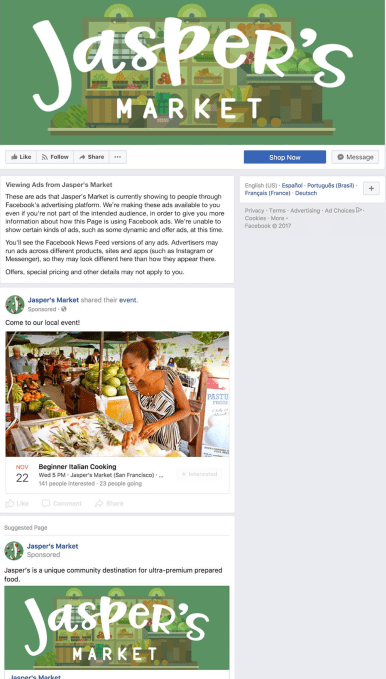