When Whim launched two years ago, it was based on a straightforward idea: What if a dating app was focused on enabling real dates, rather than chatting?

Of course, plenty of actual dates happen as a result of Tinder and its imitators, but it can take a lot of awkward messaging to get there. Whim gets rid of those preliminaries.

Founder and CEO Eve Peters said the idea appealed to users, but there was one problem: Whim also asked you to identify the days in a given week when you’d be free for dates.

“Planning ahead was hard for people,” Peters said. “With our culture becoming more and more spontaneous, asking what nights are you free for dates this week … was stressful and overwhelming.”

(For what it’s worth, when I used Whim, I did find that scheduling ahead for a possible-but-not-guaranteed date was a challenge.)

So after raising money through equity crowdfunding, Peters and her team have launched a new iOS app called Tonight. The app preserves the most distinctive part of Whim — as soon as two people show interest in each other, the app tries to set them up on a date, no messaging required.

The big difference? You’re no longer scheduling those dates ahead of time. Instead, you sign on when you’re free for a date that very evening. If both you and one of your matches is free, the app will give you a time and a place to meet up.

You’ll need to sign in by 6pm to get a date that night, which will hopefully discourage people who are just looking for a hookup. In addition, users get penalized for flaking out, and they’re eventually removed if they keep doing it. 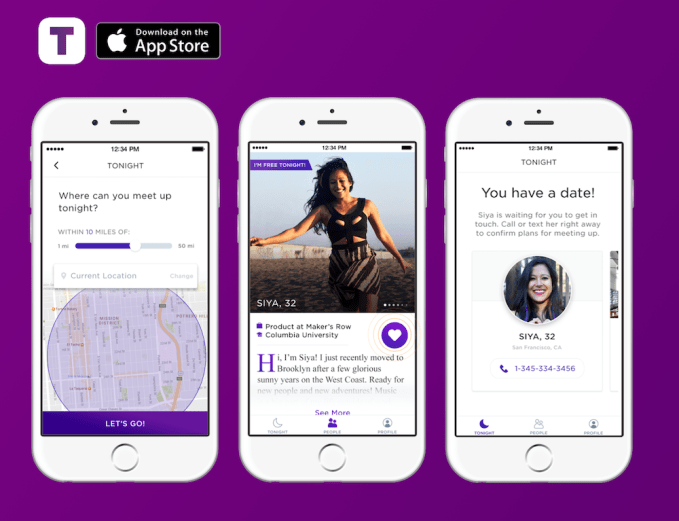 Also worth noting is the fact that users no longer swipe to get dates. Instead, they scroll down a list of potential matches and hit the heart button when they see someone they like. (They won’t just see users who are free tonight, though the available ones will usually show up at the top of the list.)

She added that she wants users to see Tonight as their personal dating assistant. For starters, the app and its push notifications have a chatty style, like it’s a friend walking you through all the steps needed for a date. Over time, Tonight could become more helpful with features like Lyft integration and customizable venue and activity recommendations.

Tonight is launching in New York first. The app is available for free for now, although the plan is to monetize either through subscriptions or a per-date model.

Whim, meanwhile, will continue to exist for now, though Peters said she aims to transition everyone over to Tonight. As for why she’s launching a new app in the first place, rather than just redesigning the existing one, she said, “We went back-and-forth but ultimately decided to rebrand. It’s such a distinctly new experience, and [the name] already helps explain what the app is about.”