If you’re sick of your beautiful videos looking crummy on Facebook, there’s good news for you. After some super HD videos started popping up on the social network, Facebook now confirms to TechCrunch it’s testing 4K video uploads and viewing using the 2160p UHD-1 Ultra-High-Definition Television standard. Some Pages and profiles can now post 4K videos to Facebook, as well as watch them. It’s been a long time coming, considering YouTube first started experimenting with 4K video playback in 2010. 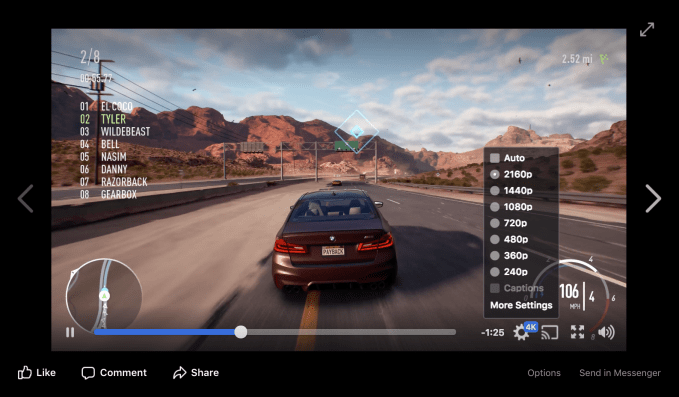 The upgrade could boost Facebook’s Watch tab of original videos. Sports, science, travel and fashion videos could especially benefit from the extra pixels. Here you can check out some examples of 4K game streaming and music videos. Facebook has been getting very serious about video lately, and just today launched the ability to bring a guest into your Instagram Live Story.

As Facebook moves from short-form, serendipitously discovered clips into longer-form, deliberately viewed videos more common to YouTube and Netflix, it will need the extra clarity to compete. YouTube started wider rollouts of 4K video in 2014 and 2015, and added 4K live streams in 2016.

Facebook launched 4K support for Live 360 videos in July, but its standard 2D videos have long been capped at 720p. That was fine for most of the stuff users shot on their phones. But with Facebook video now attracting high-frames-per-second video game streamers and professional Hollywood content creators, it needed to get with the program.

You can make sure you’re watching on the maximum resolution by hitting the gear icon on a Facebook video and switching to 2160p, aka 4K, if it’s available.