Twitter has committed to a specific timeline for rolling out changes to its Safety features, and announced new policies, including a ban on hateful display names, and improvements for second-hand “witness reporting” of abuse.

By January, Twitter plans to have implemented all the abuse changes outlined in the internal email published by Wired earlier this week, as well as the new ones shared today. The company even apologized for frequently promising improvements but then failing to take action, writing, “Far too often in the past we’ve said we’d do better and promised transparency but have fallen short in our efforts.”

Here’s a breakdown of what’s new, beyond the enhancements to existing safety features: 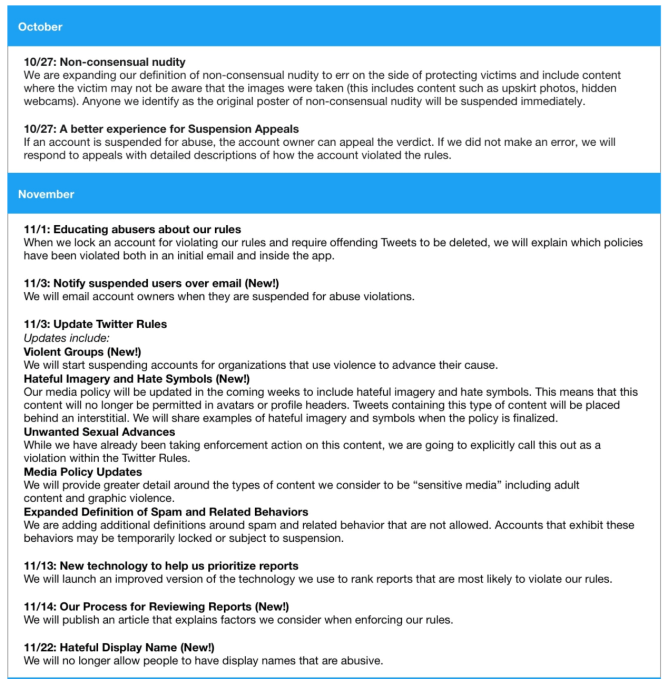 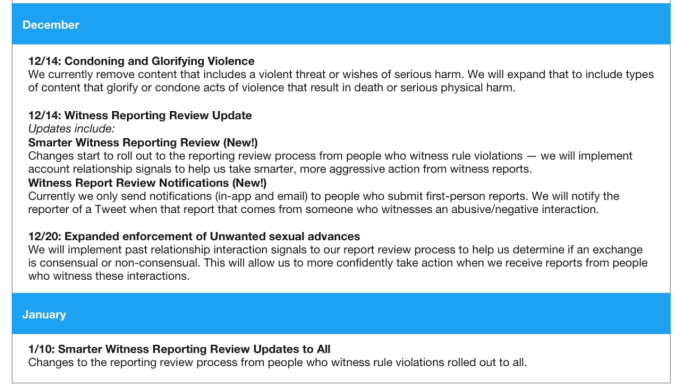 The most glaring gap in this road map is any functional change to the way that Twitter users interact. As we wrote about last week, and as had been suggested by Hunter Walk, Twitter’s biggest opportunity to shut down abuse lies in changing how replies work.

Right now, Twitter leaves it up to users to choose to mute replies from certain accounts, like ones that don’t follow them, have a newly set up account or that haven’t added a profile image, confirmed email or confirmed phone number. But the devil is the defaults that leave these off. Meanwhile, hard-set rules chosen by users could accidentally silence innocent replies. 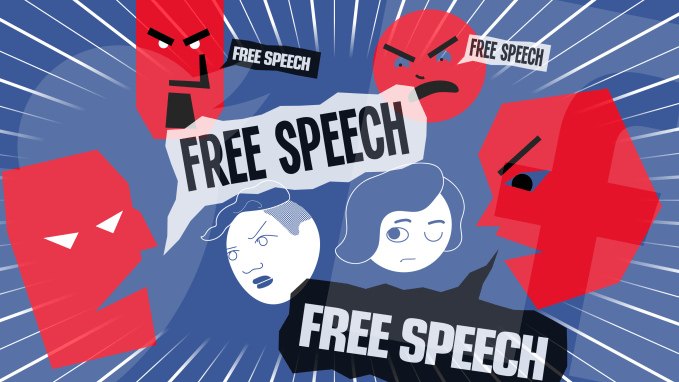 Twitter should consider turning on some of these rules by default while warning repliers that their messages might not get through unless they complete their profiles. That’s important, because registering a phone number in particular makes it tough for trolls to abandon a suspended account and simply harass people from a different handle.

By using a combination of signals, Twitter could start more aggressively filtering out replies from suspected abusers, yet give people a path to regaining the ability to @ people by taking actions that introduce friction for trolls. Though it might take a little while to get right, and some benign content may be unnecessarily censored, right now the balance is far too skewed toward a laissez-faire approach that permits harassment.

For more on how tech could fight abuse, check out our feature article Silenced by ‘free speech.’