“It’s a way to give people a chance to have fun, maybe win, maybe learn something new.” That’s how former Vine co-founder Rus Yusupov describes his new trivia game show app HQ, which feels like Who Wants to Be a Millionaire meets Facebook Live.

At 3pm and 9pm Eastern, thousands of people open up HQ’s iOS app and play along as excitable host Scott Rogowsky asks around a dozen multiple choice questions one at a time. Guess right within 10 seconds, and you move on to the next question — after Scott finishes joking about the answers. Guess wrong, and you can still comment and watch to see which players nail them all and split prize money they cash out on PayPal.

It’s simple, but feels extraordinarily fresh and urgent. I’ve played just once and it’s already craveable. Both when I missed the show yesterday afternoon and when I got eliminated in the evening, I immediately wanted to play more. By combining the interactivity of gaming, the allure of live video and the production value of Hollywood, HQ feels more alive than most anything on your phone or TV.

“We all grew up watching Jeopardy and Wheel of Fortune. That’s our basis for this kind of stuff,”  Yusupov tells me about his and fellow former Vine co-founder Colin Kroll’s new project. This reimagination of a classic entertainment staple has drawn a seed round of a few million dollars from Lightspeed via partner Jeremy Liew. He’s been having his own game show fun as a judge of Apple’s Shark Tankish “Planet of the Apps.” Liew and Yusupov declined to share the exact size of the funding round. 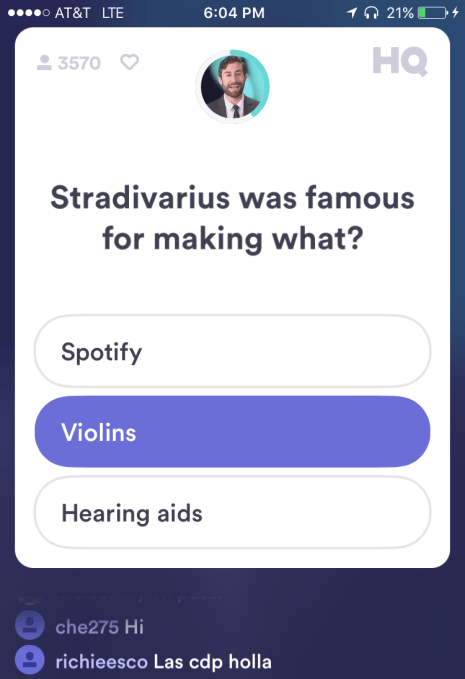 “We really believed in the technical and design capability of Rus and Colin and their broad thinking about the future of mobile video being far more interactive than just hearts,” says Liew.

Yusupov and Kroll left Twitter in late 2015 after watching their baby Vine get depriortized by the struggling social giant. A year later, when Vine was shut down despite protests across the internet, Yusupov infamously tweeted, “Don’t sell your company!” Soon the duo were at work on Intermedia Labs, an app studio that launched Hype in late 2016. The product lets you broadcast a live stream, meshing recorded video clips and other media with your real-time camera feed.

But Hype never got much hype, and neither did Intermedia’s follow-up, Bounce, which let you make music videos by recording your dance moves that are then auto-synced to a song. That’s when Yusupov and Kroll came up with HQ. “We love working in video. That’s our thing. We just wanted to make something that people play . . . with their friends and family,” Yusupov tells me.

HQ has been slowly climbing the trivia app charts since its launch in late August. It had about 3,300 concurrent players last night vying for a $150 jackpot. Yet surprisingly, it hasn’t drawn any media attention until now. Perhaps its gradual ascent and lack of coverage is due to the fact that you can’t play whenever you want like almost every other mobile game.

But that’s also the thrill of it. You feel like there’s actually consequences as you nervously play, because no one wants to be eliminated. The smooth difficulty curve from easy questions like “What could you buy on Amazon.com when it first launched? Cars, plants, or books?” at the start of the game to tougher ones like “Which of these foods is NOT made from corn? Polenta, Grits, or Gruel?” at the end makes you sure you’ll do better if you play tomorrow. 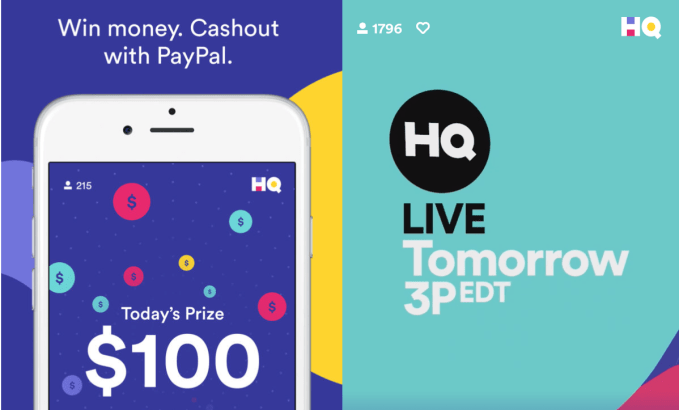 As HQ grows, there will be plenty of paths to monetization. It’s easy to imagine ad breaks between questions, product placement prize giveaways or sponsored questions about brands. “We’ve been playing around with options,” says Yusupov. “This Sunday we did a sponsored game that let us give away the biggest prize,” allowing brands to win players’ favor by boosting the money awarded to winners. With a little more traction, I’d bet HQ could easily raise a bigger funding round to boost production and marketing.

Hopefully HQ will spice things up with image, audio and other media-based questions, celebrity guests, in-chat badges for past winners or special lightning rounds. There’s plenty of inspiration on which to draw, from old black-and-white TV trivia shows to edgier computer games like “You Don’t Know Jack.” HQ also could use an Android app, as well as better comment filtering that shows your friends first since they’re currently a mess of spam that don’t add much beyond the sense of bustling competition.

As long as the founders don’t drown the brisk games in commercials, I expect HQ’s viewership to build by the day. “The players and audience experience is always going to be the most important to us.” For now there’s nothing really like HQ, proving that fast-loading video is unlocking all new opportunities on mobile despite our iPhones turning 10 this year.