Last year the NBA launched a program where they streamed one regular-season game in virtual reality each week, all season long. Today they announced that they’re doing it again, starting with a free preview on October 21st when the Houston Rockets host the Dallas Mavericks.

Just like last year, games were selected to give all 30 teams the opportunity to play in VR at least once.

There are a few new features this year, including live infographics and statistics inserted into the virtual scene. Users will also be able to select different points of view in the stadium from which to watch the game.

There’s also a new feature called Screening Room, which will allow subscribers to watch any NBA League Pass game on a giant 2D virtual movie theater-sized screen even if the game isn’t being streamed in VR. Considering that last year fans could only use the app once a week at most, being able to watch up to 13 games every night on a giant virtual screen is a huge benefit — even if they aren’t technically being streamed in VR.

The stream is powered by NextVR, and is available via their app on Samsung’s GearVR platform or Google Daydream — they’re also introducing support for Microsoft’s Windows Mixed Reality headsets this season, but still no word on when you’ll be able to watch on Oculus Rift.

To watch games in VR you have to be an NBA League Pass subscriber, either through your cable provider or directly from the NBA. You’ll then sign into the NextVR app and authenticate with your NBA League Pass credentials.

Check out the schedule for which games will be streamed in VR: 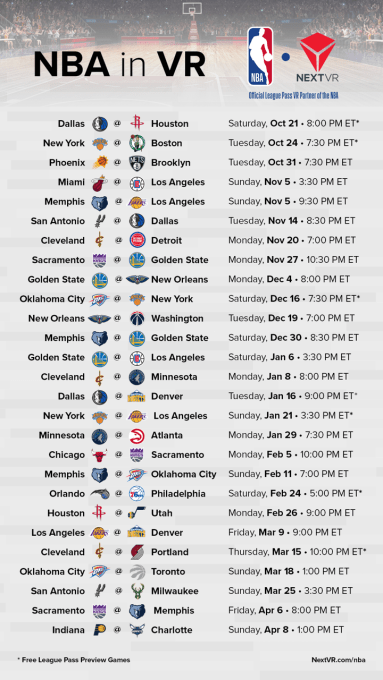