U.S. startup investors were good at putting capital to work this past quarter. They weren’t as good at getting it back.

Those are two standout trends for the venture investment landscape in the domestic third quarter of 2017, according to reported and projected data from Crunchbase. Data shows a rise in late-stage funding and a stabilizing early-stage funding environment. Acquisitions and IPO activity, by comparison, were lackluster.

At the late stage, U.S. venture investment hit its highest level in five quarters by both round count and total dollars invested. Total investment at the early stage was also at the highest point in the past year. Meanwhile, round counts were down from a year ago, but fairly stable quarter-over-quarter.

Bottom line: There was a lot of money going into the ecosystem. That’s left some VCs worried about exits.

“There’s just so much money going into these late-stage rounds that the public markets can’t take them all and acquirers can’t acquire them all,” said Barry Eggers, a partner at Lightspeed Venture Partners, which invests at early through late-stage rounds.

On the one hand, Eggers noted that a plentiful supply of late-stage capital can help companies by providing more runway to scale and achieve the earnings metrics that buyers and public market investors seek. But it also makes it easier to put off an IPO or acquisition, which means venture fund investors have to wait longer for returns.

For Q3 2017, massive capital influxes from the SoftBank Vision Fund at early through growth-stage rounds played a considerable role in pushing up funding totals. Even without SoftBank, however, many of the trends visible in recent quarters continued, including the minting of new unicorns and rising investment in hot sectors like AI and transportation.

Below, we look at some of the key data points for the quarter, including early and late-stage funding, M&A and IPOs.

Fewer U.S. seed and early-stage companies are closing funding rounds in 2017 compared to a year ago. However, the decline in round counts appears to have stabilized. 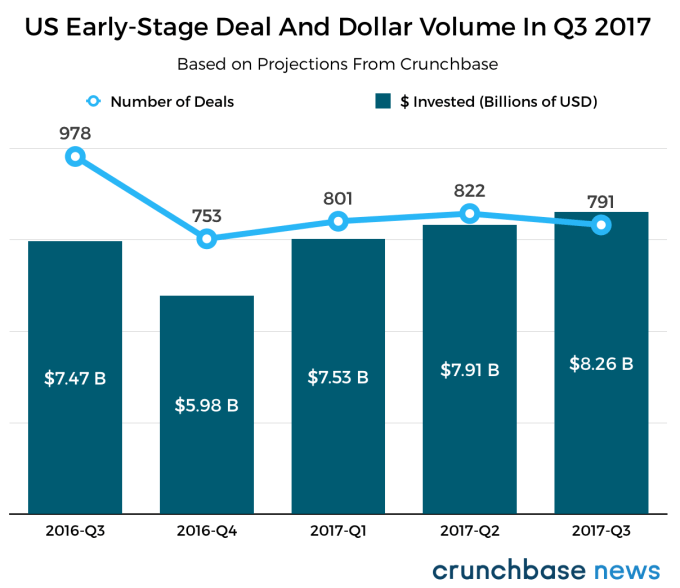 A few exceptionally large Series A and B rounds helped boost the funding totals. By far the largest such round for Q3 2017 was a $200 million SoftBank-backed Series B for Plenty, a Silicon Valley-based developer of indoor farms. Other big round recipients include Nauto, developer of camera technology for autonomous vehicles, and Bread, a fintech startup that partners with online retailers to extend pay-over-time offers to customers.

Below is a list of some of the largest early-stage rounds: 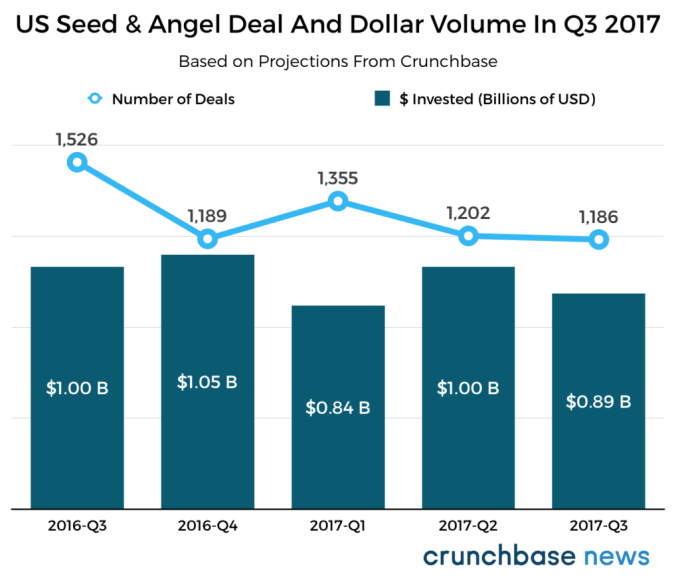 Below, we highlight several of the more significant seed-stage financings for the just-ended quarter: 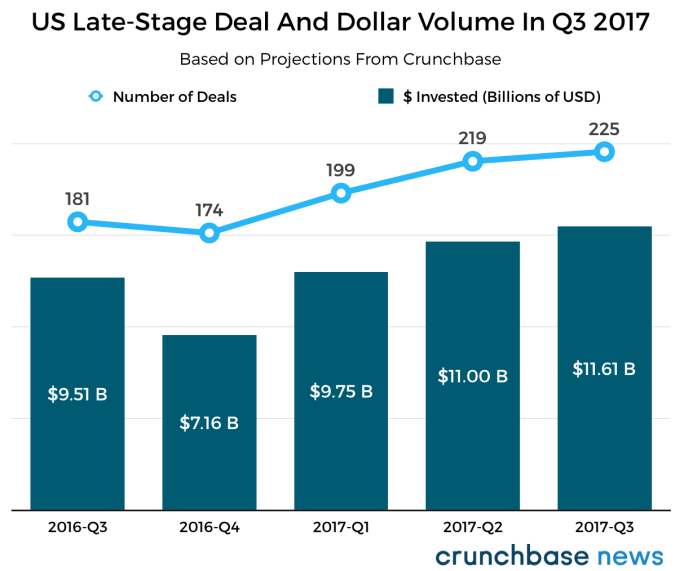 The largest late-stage funding rounds went to a variety of sectors, including transportation, medical devices and online services. Gogoro, a developer of electric scooters and battery swapping infrastructure, secured one of the largest financings, closing on $300 million in a Temasek-backed round. Other big funding recipients include Auris Surgical Robotics, a developer of robotics technology for ophthalmic surgery, and Via, a ridesharing app. See a list of large late-stage rounds below:

Total funding and the SoftBank effect

Overall, venture funding for Q3 of 2017 totaled $21.75 billion, according to Crunchbase projections. That’s up slightly from Q2 of 2017 and from Q3 of 2016, and marks the highest total in the past five quarters. The quarterly totals also include several investment rounds involving mature startups that are classified as technology growth rounds.

A discussion of big third-quarter investments would be remiss without a mention of SoftBank. The firm’s $93 billion SoftBank Vision Fund is the largest-venture corporate venture investment vehicle ever — and it was a forceful presence in Q3, backing many of the quarter’s largest rounds.

SoftBank was especially active in late-stage and growth-stage dealmaking, as a sole or lead investor in over $6.4 billion worth of rounds for U.S. companies, including a massive $4.4 billion growth financing for co-working giant WeWork.

Just how to classify SoftBank-backed rounds was a matter of some internal debate at Crunchbase News. The firm’s investments, in some cases, hew closer to growth equity than venture capital. In the final analysis, we included some of SoftBank’s investments, including earlier-stage rounds and deals in which it co-invested with other VCs in the quarterly totals, while excluding others, such as the WeWork investment, which was deemed to better fit the parameters of a private equity investment.

The pace of U.S. venture-backed exits was relatively slow in the just-ended quarter, with a handful of IPOs and no multi-billion-dollar acquisitions.

It was the second quarter in a row without a multi-billion-dollar acquisition of a venture-backed company. The last deal of that magnitude was back in January, when Cisco bought AppDynamics for $3.7 billion. That said, corporate acquirers did make a few big Q3 purchases, snapping up VC-funded companies in sectors ranging from medical devices to enterprise software to beverages.

Potentially the largest disclosed acquisition was Teleflex’s purchase of NeoTract, a developer of surgical devices for urological and gynecological disorders, for $725 million up front and up to $375 million in milestone payments. Silicon Valley-based NeoTract had previously raised about $175 million in venture funding. Other VC-funded companies that sold for sums in hundreds of millions this past quarter include healthcare revenue software provider ZirMed, coffee purveyor Blue Bottle, agricultural robotics startup Blue River and enterprise software companies Gigya and Springpath. See the chart below for details:

The last VC-backed IPO of the quarter — for streaming media device maker Roku — was also the largest. The Los Gatos, Calif.-based company raised $220 million in its offering last week, with share prices surging more than 80 percent in the following trading days. The next-biggest offering came from Redfin, a tech-enabled real estate brokerage that raised $138 million in its July debut, with shares up about 66 percent from the offering price in recent trading. 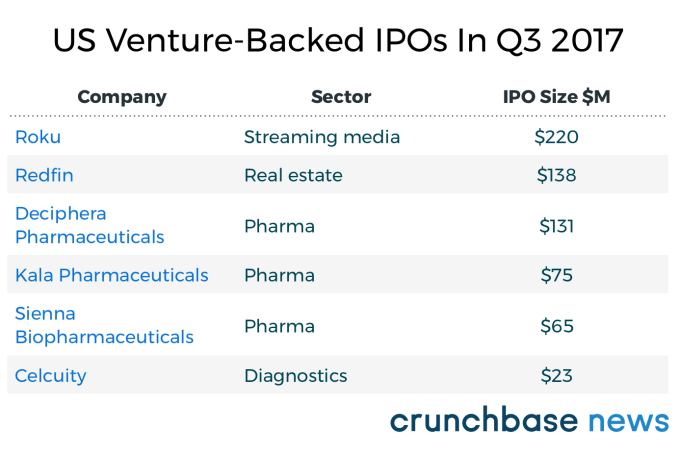 The combination of continued high late-stage funding activity and slow exits leads Eggers and others in the industry to raise concerns about an eventual shakeout.

That said, there are indications of some pickup in exit activity ahead, though it may take time. Most notably, the board of Uber, the most highly valued U.S. startup, set a goal to take the company public by 2019. If Uber manages to sustain or exceed its current valuation of around $70 billion, that could go a long way toward delivering venture investors some much-awaited returns.