As a member of the Data Generation, I’ve found that my photos, videos, and documents quickly expand to fill their containers. A standard USB drive is quickly replaced by another, larger one while home network file servers fall by the wayside as they get full, old, and dangerously lossy. In short, it’s time for the big guns.

That’s why I was pleased to try out the Netgear ReadyNAS 524X, part of Netgear’s new network attached storage series aimed at small businesses and home users. The diskless version costs about $800 and can hold up to 40TB.

This NAS is essentially a small computer. It can run apps including tools for BitTorrent downloads and remote backups and it uses XRAID to ensure hot-swapability on each drive. This feature, enabled by RAID6, allows for the catastrophic failure of up to two of the drives but causes a deep hit in storage capacity. This also means you can literally pull a disk out of this thing randomly and have the entire setup still run. If you want to know your real-world sizing with RAID6 enabled this calculator can help. I tested the performance by pulling two disks and everything worked perfectly although the reindexing process lasted over 24 hours each time the device was hit.

Setting up the drive is quite simple. To add a drive you simply pull out a carriage and snap the drive into place without tools. When you boot up for the first time you can begin a formatting process that brings all the drives online simultaneously. Then, when you need to swap one out, you can shut down the system manually and replace the drive offline. All you have to do is connect an Ethernet cable – this doesn’t support Wi-Fi, and fire it up.

Once the NAS is up and running the system appears as a Windows and MacOS share. The drive can also support DLNA and UPnP and you can even SSH into the box where you’ll find a standard Debian installation. This also means you can run cron jobs and even side load apps, a feature quite useful if you want to manage files with a little more granularity. Further, the NAS supports ReadyCloud, Netgear’s own remote access protocol that lets you see files remotely. Further, you can connect the drive to Amazon S3, Google Drive, and Dropbox and sync folders back and forth. This makes it perfect for backing up live projects and maintaining a record of your remote files.

Home users will be happy with the Plex support – Plex will scan any folder on the drive and serve it up piping hot to your TV – along with BitTorrent and NZB clients which are useful, obviously, for downloading public domain video from public servers.

Finally if you stuff a load of music on here you’ll also be able to access iTunes shares by clicking a button in the admin system. In short, this thing does it all.

If you dig deeper in the ReadyNAS app store you’ll find a number of useful tools including a solution for recording surveillance video as well as systems for managing syncing across servers. The app store, in fact, is the coolest part of this NAS, turning it from a simple storage server into something immensely useful. 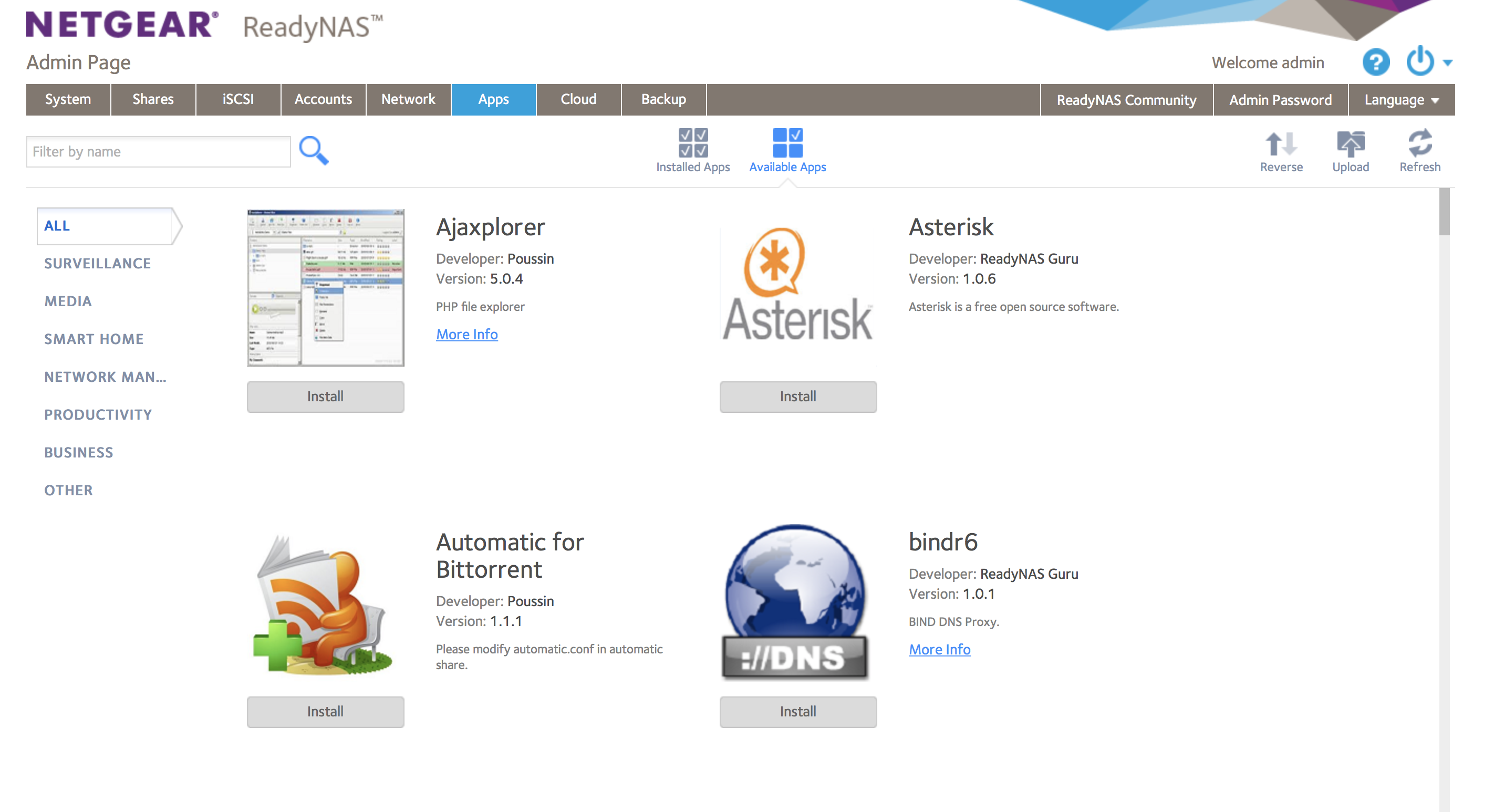 For example, you can install Drupal, an HTML5 based SSH terminal, and a Docker management tool right from the main admin screen. Many of the tools are fairly functional and aimed mostly at programmers who want to simulate remote storage conditions in their non-production code.

Because this NAS runs a Intel D1508 Dual Core 2.2GHz processor with 4GB of memory I haven’t yet been able to max this thing out although Netgear recommends a maximum of 80 users. I personally tried many of the streaming apps and found them to be far more efficient than anything I’ve used before, including a Plex server running on a 2014 iMac. Because this is essentially a Debian server it’s quite capable and quite compact.

In terms of performance this kit is obviously as good as your LAN network but I did a bit of testing using my home network and saw nothing untoward. If you’re looking for solid benchmarks StorageReview posted a nice rundown but I’ll show you what I found.

I used a tool called Helios LanTest to read and write files to the drive.

The results showed real-world performance in my home network and modeling the same tests on the device itself took far less time – a few seconds. An 8GB library of music took about an hour to transfer over that same network – on par with anything else I’ve seen in the space.

The 524X is a beast. I’m used to using smaller devices with single drives and adding this to my network opened up a whole new world of, well, data hoarding. It’s a file server, a testbed, a media streamer, and more and it’s also a Debian machine and a great way to back up your computers. While the price is a little high – about $800 for a diskless unit – you’re essentially getting a mini-PC with some definite RAID6 smarts. While it might be overkill for folks with a few baby pictures to back up, it’s definitely worth a look if you keep lots of stuff on lots of servers. You will have so much more room for activities.