In a post-Juicero world, the bar has been set high for any piece of smart kitchen hardware that only makes one type of food. Enter Yomee, which bills itself as the Keurig of fresh yogurt and is now raising funds on Kickstarter. Lecker Labs, the startup behind Yomee, hopes that its relatively low price (each unit will retail for $99) and cost-savings will let it succeed where Juicero failed.

It also helps that culturing yogurt is more complicated than squeezing a baggie of milk with your hands. A few missteps and you might end up with milk that never gels or an inedible lumpy goo. Yomee simplifies that process with a pod containing live cultures that users insert into the machine, which is about the size of a small coffee maker, before pouring in milk. After picking what kind of yogurt they want on Yomee’s app, they leave it alone for six hours. During that time, Yomee boils and stirs the milk and lets it set into yogurt before cooling it down to 50 degrees Fahrenheit. 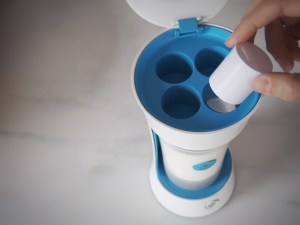 To be sure, there are already many yogurt makers on the market, including several models that cost under $30 on Amazon.com. But Yomee requires less supervision, which may help make it more attractive to people who are busy, lazy or just really love yogurt (power users can even send calorie information directly from Yomee’s app to Apple Health or Google Fit).

While growing up in Delhi, Lecker Labs founder Ashok Jaiswal watched his mother make yogurt every day to eat plain or use in recipes. After moving overseas 15 years ago, however, he started buying all his yogurt from supermarkets. Then he had a daughter and became pickier about what kind of yogurt he fed her. So he tried to recreate his mother’s recipe from memory.

“I wanted to make yogurt like my mom’s yogurt, but it didn’t turn out. I was like ‘huh?’,” Jaiswal tells TechCrunch.

He called his mother for help and the two of them figured out that the cooler climate in Hong Kong, where he currently lives, meant he had to adjust her recipe. Looking for an easier option, Jaiswal went online to buy a yogurt maker, but most still required him to boil milk and calculate fermentation times.

The final straw came when Jaiswal discovered that most of his friends had no idea yogurt could even be made at home. He sold his stake in EzeeCube, his last startup, and launched Lecker Labs, which was accepted by accelerator program Food-X, to create Yomee.

Jaiswal says Yomee’s value proposition is one of the things that sets it apart from Juicero. Pods cost $4 for a pack of five and each one cultures about 10 ounces of yogurt. In comparison, plain Greek yogurt sold in supermarkets ranges from about 12 cents to 30 cents an ounces, depending on brand. Pods are also open-source so other companies can market their own branded versions (Jaiswal says two major dairy companies are already onboard with the idea). Yomee will also sell pods for vegan yogurts made from soy, almond, coconut or rice milk.

“Juicero had its own team and they had their own vision,” says Jaiswal. “What we’re focusing on is a product that is reasonably priced and pods that are reasonably priced. The machine will not only work with our pods, but also a third-party network of pods. So our yogurt is cheaper than supermarket yogurt and the value and convenience we provide is very high.”

Lecker Labs is currently working with factories in Hong Kong and Taiwan to get the Yomee ready to ship right after the Lunar New Year, which takes place in the middle of February next year. After all Kickstarter units have shipped, Jaiswal says Lecker Labs’ goal is to launch Yomee on Amazon by the end of 2018 and get it into retail stores by 2019.