Southeast Asia-based games and e-commerce firm Sea, formerly known as Garena, has officially filed for its much-anticipated U.S. IPO. The company, which is valued at over $3.75 billion, will list on the New York Stock Exchange as ‘SE’ and is looking to raise $1 billion.

Sea is best known for its Garena gaming business, which predominantly focuses on PC games but also includes mobile, but in recent years it has branched out into e-commerce with its Shopee service and payments with its AirPay business.

The Garena games portal is like Steam for PCs. It counts 40.1 million monthly users as of June 2017, with 12.9 million daily users spending an average of 2.3 hours per day on the service. Garena is Sea’s only revenue-generator since the company is still subsidizing Shopee and AirPlay is available in just three markets.

The company said this was predominantly down to Shopee, which it has been subsidizing in order to battle the likes of Alibaba-owned Lazada in Southeast Asia’s e-commerce space, which is tipped to grow from $5.5 billion in 2015 to $87.8 billion in 2025, according to a report co-authored by Google. 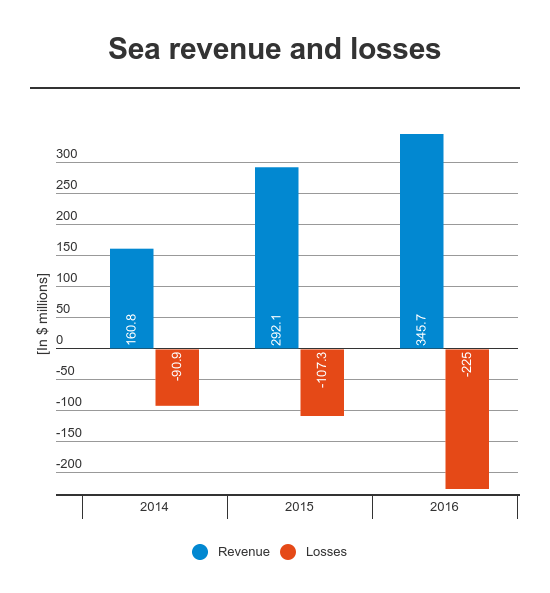 That Southeast Asia growth story is the anchor for this public listing, with Sea putting its faith in the region’s rapidly growing internet space — which is adding 3.8 million new users a month — to propel its business to profitability.

It’s unclear if that is accurate. Lazada reached $1.024 billion GMV for 2015, but founding company Rocket Internet ceased reporting its financial details after the first of two $1 billion Alibaba investments in April 2016.

There’s plenty of rival between the two, and Lazada CEO Max Bittner had previously fired shots at “rival” companies for pumping their numbers.

“In comparison to our competitors, who are keen to tell everyone how big their GMV is, we don’t have the need to scream very loud about how much money we raised,” Bittner told TechCrunch earlier this year when Alibaba made its second investment.

No doubt the growth of Shopee, which was only formed two years ago, is impressive. Sea has begun to monetize it for the first time this year when it introduced advertising and seller commission fees in Taiwan. There are still six other countries to monetize, and Sea said it might consider other types of revenue generation.

This IPO is an important event for Southeast Asia more generally, where the only recent U.S. IPO was a disastrous and short listing from payment company MOL that ended in 2016.

Sea is the much-anticipated listing that investors and founders are hoping could light up a feel good factor about Southeast Asia as a tech destination and pave the path for other IPOs.

The region has seen a number of billion dollar companies rise to the point of a public exit, and Sea is leading the pile. A successful IPO could tempt other tech companies in Southeast Asia to test the public markets with a listing of their own.

The main beneficiary of the Sea listing will be Tencent, the largest shareholder with a 39.7 percent share, with Blue Dolphins Venture — an organization set up by founder Forrest Li — holding 15 percent. Li himself has 20 percent, and CTO Gang Ye has 10 percent.

Other investors include Hillhouse Capital, Temasek’s SeaTown Holdings and Mistletoe, but their share holdings were not disclosed in the filing.