Apple’s Series 3 smartwatch may look the same on the outside as the previous generation (albeit with a new ceramic gray option and contrasting red-tipped digital crown), but what they have inside might help kick the somewhat sleepy wearable category into high gear. To be clear, Apple isn’t the first to put cellular connectivity into a smartwatch — but it is the first to put it into a good smartwatch.

The Apple Watch is still a device I have mixed feelings about, even though I generally wear one every day. It’s not essential the way a smartphone is, but it can be time- and stress-saving in some key situations, especially if your job depends on being current. And it’s undeniably useful if you happen to run, train or travel with any frequency.

Apple faced a lot of criticism when the Watch first launched, and while subsequent rethinks of the software experience have improved things a lot, it’s still not praised with anywhere near the frequency and intensity of other products in its lineup, especially the iPhone.

But if you’ve spent any significant time with other wearables, you start to realize just how much the original Apple Watch (and the Series 2, by extension) actually got right. It ticks basic boxes that are not so consistently checked by Android Wear or Samsung competitors, with things as basic as notifications and heart rate tracking.

Cellular connectivity probably won’t end up actually adding a ton to the experience of owning an Apple Watch — it’s not going to become your sole device, for instance, replacing an iPhone entirely. But it will shore up some of the remaining limitations the Watch has, and it could turn the tide of overall sentiment for the device. 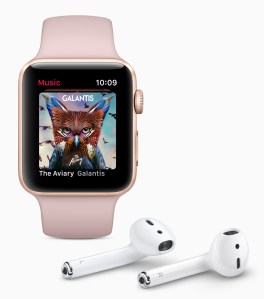 Regardless of when they hit, they’re coming, and it’s going to shore up the current, less-than-ideal experience of trying to listen to music on your Apple Watch when you don’t bring your phone along for the trip. It remains one of the most frustrating parts of its overall use, despite fixes like automatic overnight playlist syncing introduced in the last major watchOS revision.

Notifications, available via the constant data connection, is also a big win for iPhone-less usability, as is the ability to use Siri when not connected. Apple’s basically increasing the available use cases for Watch by as many as a few hundred moments per day, depending on how often you’d run out to grab something, head to a meeting or run an errand without taking your phone with you if that was a practical option.

Health capabilities, including the work Apple is doing with using the built-in heart rate monitor to identify arrhythmia and other potential issues related to changes in heart rate, also stand to benefit from a standalone data connection, since they mean that this info can potentially trigger action even when a user is away from their phone. We might still be a ways off from your watch placing an emergency call when you’re encountering a medical issue while exercising, but this is a potential step in that direction.

Again, Apple isn’t breaking new ground by putting an LTE connection in a wearable — but as it has done in the past, it could take a known recipe and make a much better resulting product experience because of its unique perspective and approach to design and implementation. But if it does raise interest in the category and demonstrate a path for others to follow, you can bet that others in the industry will be following in the Watch’s footsteps pretty quickly with a return to the now often ignored market.