When a company expands to Latin America, it requires a great deal of effort to adapt the language, operations and marketing strategies in order to find acceptance in the local market. In Spanish, the process of adapting a product or service to the local market is called “tropicalización,” or tropicalization.

Because tropicalization is often a significant undertaking, there are countless business models in the United States and other English-speaking markets that have not yet been fully implemented in Latin America, leaving real opportunities for startups in the region. In fact, up until now, a majority of the most successful startups coming out of Latin America have fallen under the “copycat” business model. In other words, local entrepreneurs have been the ones replicating successful business models crafted by U.S. startups and launching them locally. A few examples include MercadoLibre — the “eBay,” OLX — the “Craigslist” and Despegar — the “Expedia.”

The “copycat” business model has some favorable attributes. For one, startups can easily explain their concept to local investors using the well-known “Uber for X” phrasing, allowing investors to quickly identify the problem and understand how this could be a notable solution. This tends to make securing investments in a traditionally risk-adverse region a whole lot easier.

On the other hand, there’s been a rise in truly disruptive ideas coming out of Latin America, as well. Before going into which business model is more advantageous in the region, it is also important to point out the difference between “innovation” and “disruption.”

Certainly, “copycat” startups can be innovators, but not all innovators are disruptors. After all, implementing an existing business model for a local market does require creativity and a serious commitment, but true disruption uproots everything consumers currently understand, how they behave and how they do business.

According to Harvard Business School professor and disruption guru Clayton Christensen, “disruption displaces an existing market, industry, or technology and produces something new and more efficient and worthwhile. It is at once destructive and creative.”

It’s worth exploring which model has been more effective in Latin America and in which way will startups continue to progress. Will they continue reshaping known business models for the Latin American market? Or, are we witnessing a steady influx of ideas that are entirely brand new? To answer that question, it’s important to first explore some of the startups born from each approach, and what the advantages and disadvantages of each approach are for entrepreneurs in Latin America.

The risk-averse nature of investors in Latin America has a lot to do with why so many VCs have felt much more confident investing in ideas that mimic successful companies in the U.S. or Europe. However, as the saying goes, an idea alone is not always the key to success; what matters is execution.

Replicating an existing business model can be extremely challenging in a complex region like Latin America. In some cases, startups find adapting relatively easy. However, most of the time it can be a tough path. Nicolas Szekasy, an investor and board member of Restorando, Latin America’s “OpenTable,” argues that most copycats in the region are simply variations using the same technology. He goes on to say, “that if the companies initially appear to be copycats of their U.S. counterparts, they often adapt and adjust along the way to successfully serve the local market, and ultimately end up with very different business models.”

True disruption uproots everything consumers currently understand, how they behave and how they do business.

The true definition of a “copycat” is still very much open to interpretation. However, what really matters is that this approach does have its advantages, and, many times, Latin American startups are implementing existing ideas in a better way — or creating more value than how the original model was designed.

Take Brazil’s Dafiti, for example. Now part of Berlin-based Rocket Internet, which is famous for applying proven ideas in other countries in emerging markets, Dafiti based its original business model off of U.S.-based Zappos and tailored the business model to fit the Latin American market. In doing so, it became quite successful in the region and joined Rocket Internet’s global fashion group, which is now valued at $1.1 billion.

Brazilian technology-powered freight broker CargoX also found considerable success with its “Uber for trucking” business model. Brazil reportedly has an excess of between 300,000 and 350,000 vehicles, with trucks running empty 40 percent of the time. The goal of CargoX is to reduce the number of empty trucks on the highway, increase revenue for truckers and reduce costs for freight owners.

Between its launch in 2013 and last year, CargoX added 100,000 members, equivalent to 10 percent of self-employed truck drivers in Brazil. In a single day, the company once registered 5,000 downloads, according to the company’s CEO, Argentine Federico Vega. Fast-forward to today, and CargoX has raised an additional $10 million in Series B funding from Goldman Sachs, established a network of more than 150,000 trucks and has laid the foundation for a sustainable transportation company with great potential for expansion throughout the rest of the region.

A few other examples of the applied business model, or “copycat” successes in the region include:

In today’s digital age, ideas can travel much faster than companies can. Nonetheless, what matters most is the execution of those ideas. In many of the above cases, the “copycat” approach has its definite advantages. These Latin American entrepreneurs are well aware that with the right strategies in place, they can adapt profitable business models from the U.S. and Europe to the local market and grow them quickly — with expansion and exit strategies already in place.

The disruptors in Latin America

Even though there are plenty of inspiring “copycat” startups in Latin America upheld by innovative founders, high valuations and millions of users, this way of thinking is not without its criticisms.

During the last decade, many involved in the Latin American ecosystem have pointed out that simply copying what U.S. and European startups are doing is no longer a sustainable model. In Latin America, the majority of entrepreneurs and investors have become far too comfortable with this strategy, always looking for easy wins. However, if the region is going to partake in global innovation, then entrepreneurs and investors must start focusing more on real disruption.

The good news is that there are fewer and fewer copycats, as Latin America’s entrepreneurs are becoming much more aware that they must compete globally. Startups like Satellogic are evidence of this shift in thinking. The company is on a mission to develop commercial-grade satellites at an extremely low cost, for less than $100,000. The founder and CEO, Argentine Emiliano Kargieman, is a hacker at heart, with years of experience in the technology landscape.

Satellogic is planning to launch a constellation of nanosatellites into orbit that will generate real-time images from all over the planet  —  an incredibly valuable asset for hundreds of industries. No company has attempted this before, and Satellogic’s approach has the potential to truly disrupt the satellite data market.

Even though a disruptive approach tends to be more capital-intensive, it’s usually from this side that the world’s most visionary leaders are born.

There are plenty of other disruptors emerging in Latin America. In fact, these companies can already be counted by the thousands and are spreading beyond the internet into new sectors like agtech, clean energy, biotechnology, digital medicine, renewable energy, software security, IoT and AI. “Latin America is witnessing the emergence and growth of a new species of companies that is transforming our business landscape,” a new report on Tecnolatinas (technology-based private companies born in the region) states. “And most of these Tecnolatinas are entrepreneur-driven, digital ventures with an international footprint.”

Semtive, founded by a team of Argentines, is producing turbines designed for low wind speeds — unlike traditional wind farms that rely on speeds of 30 mph or greater. With the smallest model starting at $4,600 USD, the startup hopes to become the first and most affordable small wind turbine on the market for homes and businesses.

The Latin American agricultural technology market is expected to reach $541.8 million by 2022, and BovControl is another company disrupting “business as usual” by supporting efficient farm production using data collection techniques, cloud computing and information delivery. Founded in Brazil, where there are more cows than people, BovControl is now used on thousands of farms across the world.

Which approach is more effective in Latin America?

To draw a conclusion as to which approach is better for startups in Latin America, it strongly depends on the definition of success being used. For example, success could be based on the total funding companies have raised using each approach. In this case, one could look at the most recent Latin American Venture Capital Trend Watch Report by LAVCA, which describes the top 10 venture capital deals made in 2016. Of the 10 largest deals, the majority were made in companies whose businesses appear to mimic existing models in the U.S., such as Square, Lending Club and Postmates.

If the definition of success is an acquisition, then of the dozen or so Latin American startups listed here that have been acquired by companies abroad since 2013, three-to-four companies could be considered truly disruptive. The other nine or more used an applied business model approach and were acquired by similar services abroad as a strategic entrance into the region.

And finally, one of the more conventional ways to measure startup success is to examine valuations. Of the nine Latin American companies currently in the billion-dollar club, three are clearly using an applied business model approach and six have developed disruptive solutions.

It is possible to draw conclusions based on the data above, but for the most part, it remains to be seen which business model is producing the most startup successes in Latin America as the ecosystem is still relatively young when compared to other more mature ecosystems. Additionally, both approaches have their advantages and disadvantages when applied in Latin America. The “copycat,” or applied business model approach, can be used to fulfill unmet needs in an existing category. For the most part, it also tends to be faster and cheaper. However, execution is key and speed matters, as companies who opt for this route often face a lot more competition. 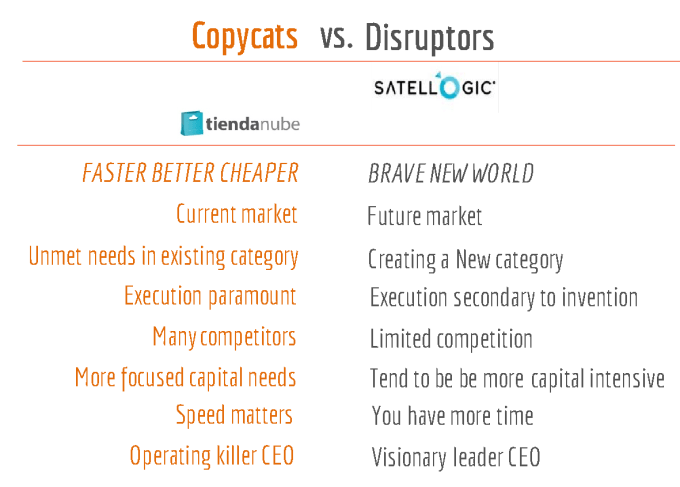 The innovative, disruptor approach has its unique advantages in that companies can create their own category, and, therefore, are faced with less competition. And even though a disruptive approach tends to be more capital-intensive, it’s usually from this side that the world’s most visionary leaders are born. As someone who has invested in companies on both sides of the table, I can confidently say that Latin America is filled with incredibly innovative entrepreneurs creating real solutions to real problems in Latin America — and they are doing so by any means possible.

Full disclosure: My firm, NXTP Labs, is an investor in CargoX, Properati, TiendaNube, Satellogic and Semtive.