Last week, Amazon said that its massive $13.7 billion deal to acquire Whole Foods is wrapping up on Monday — giving it access to one of the strongest food brands in the United States, as well as hundreds of grocery stores in metropolitan areas.

That means it’s going to be easier and easier for people to get access to great ingredients, and there’s been a continued trickle of suggestions that Amazon will be gunning for a massive business that helped Blue Apron go public — a trickle that has since tempered Wall Street’s appetite for that business.

All this raises a ton of questions as to what the future of Blue Apron is as Amazon looks primed to bulldoze into its territory in a very Amazon move. But as the specter of Amazon getting into meal-kit delivery looms, let’s review really quickly what Blue Apron has going for it: 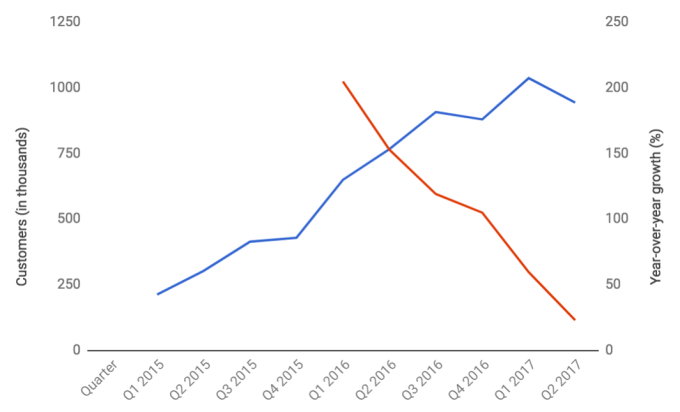 Still, Blue Apron’s stock fell quite dramatically again after it released its most-recent quarterly earnings report, even though the business showed some signs of life. It signaled that the company would likely continue to see losses going forward — projecting a net loss between $121 million and $128 million. Investors looking for a kind of performance like the flash of life that it showed earlier even amid a heavy burn rate to acquire customers seem likely to be disappointed in the near term as the company calibrates for a future where Amazon may go after its business.

While Blue Apron requires an aggressive marketing engine — especially as it tries to expand beyond metropolitan areas, which are probably its sweet spot — still seems primed for a product that could grow organically. One example would be that the product seems like a very natural fit for a gift for occasions like weddings, birthdays or the holidays. This seems like obvious low-hanging fruit, where it can turn around and rely on that branding and consumer experience in order to convert those customers to more long-term ones and start the cycle again.

Blue Apron can again lean on that strong brand that it’s built as one of the big anticipated consumer IPOs for 2017, even if it was a flop. Blue Apron at the beginning of 2018 — if it can last out to the holiday quarter — may end up looking like a much healthier Blue Apron at the middle of 2017.

To be sure, Blue Apron’s growth has greatly decelerated (in the same fashion most companies do as they mature), and there really isn’t a lot of data to predict that forward: 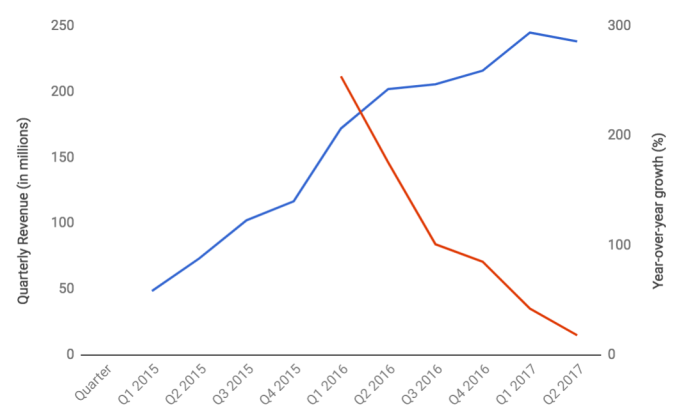 One of Blue Apron’s biggest challenges may end up being Amazon’s Prime business. The company said Prime members will soon see “special savings” when it comes to Whole Foods, which could end up being pretty much anything. Knowing Amazon, it’s likely to run a ton of experiments to figure out how to quickly quash any competitors and then decide how to grow it into a mature, profitable business later.

In the end, the drip-drip-drip of aggressive news about a potential Amazon competitor will probably continue to put a lot of pressure on Blue Apron, especially as it still seems to be racking up losses. But the company has shown that it’s willing to re-orient itself following the IPO, including making some changes in the executive ranks and some organizational changes.

And while Amazon even seems to be testing a product in the vein of Stitch Fix, that company has still filed confidentially to go public — and is going to charge forward despite the specter of Amazon. There are still a lot of things going for the company and, if it’s able to lean on what initially made it able to expose that huge business, Blue Apron may have a shot to be a company that continues to exist even if the Amazon behemoth tries to get into its market.