Google just announced Android Oreo and it packs a handful of new features. Some are at the system level and speed up the system and extend the battery life, while others are features that will change the way users interact with their phone.

A lot of these features should be familiar to iPhone and iPad owners. Normally Apple is the one accused of copying Android, but for Android Oreo, Google lifted a handful of features straight from iOS, while a couple of new functions are hitting Android before iOS. 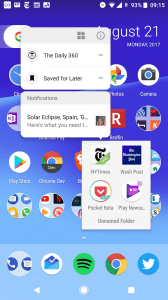 Google cribbed iOS for Android’s new notification scheme. In Android Oreo there will be a little dot in the top-right corner of the app’s icon to represent a notification. This has been a staple in iOS since the first iPhone and third-party Android launchers have long featured the scheme, too.

Google even copied how users interact with the notifications, too. A long press on an icon with a notification badge reveals a pop-up menu that presents the user with several tasks — just like an iOS 3D Touch interaction.

In the end, it’s a win to the user that Google copied this system. These dots have survived numerous iOS revisions for a reason: they work. 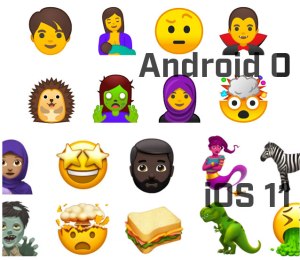 Both Android Oreo and iOS 11 are getting new emojis because emojis are the future of humanity. And Google completely redesigned their take on emojis for Android Oreo. Gone are the blobs and traditional, round emojis have returned.

Google’s new emojis follow Apple’s move to increase the detail found on the little faces. Yet according to a preview by Apple’s Tim Cook, iOS is about to get emojis that are even more detailed.

This tweet by Apple’s CEO shows emojis with a crazy level of detail. Apple has yet to say when the new characters will hit iOS, but it’s logical to expect them in the general release of iOS 11 and High Sierra.

A smarter copy and paste

Android has supported copy and paste functions from the first release and has often led iOS’s implementation of the user interaction. It’s a critical function, yet the small screen size of phones often means copy and pasting is a clumsy affair. Android Oreo now makes it even easier to copy text and perform an action.

Called Smart Text Selection, when a user highlights, say an address, a link to Maps will be displayed next to the standard actions of copy, cut and paste. If a series of digits that looks like a phone number is highlighted, the phone app will be displayed.

This is sort of like how data detectors work in iOS, but Google’s feature looks to be more comprehensive, and it’s powered by Google’s AI for smarter identification. 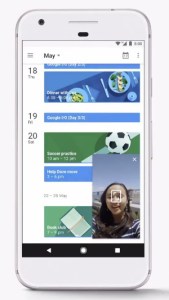 Apple added picture-in-picture to the iPad in iOS 9 and Android is now gaining the capability, too. But with Android Oreo, phones can get in on the PiP action, too, which is something missing from the iPhone.

Android Oreo’s PiP mode works as expected. It allows users to minimize a video and let it float on top of the screen while other tasks are performed behind it. This video window can be moved around the screen to best position it.

Right now iOS limits this process to the iPad, though that could change in the future.

Android Oreo finally brings the ability to have apps auto-fill user information like user names, passwords and addresses. Password manager apps have long performed some of these functions, but through convoluted means. Apps can now implement the Autofill API so the interaction should be much more seamless.

iOS kind of has a similar function, but it’s mostly reserved for a few apps, like Amazon’s, and it’s not nearly as omnipresent as it is in Safari on the web.