For the average American, the name “SoftBank” doesn’t mean much.

It’s neither soft nor, technically, a bank. It’s a sprawling Japanese mobile carrier, internet service provider and holding company for other businesses ranging from cloud services and self-driving cars to energy trading. And its investment arm has bankrolled some of the world’s largest and most successful upstart technology companies, including many with serious name recognition here in the U.S.

Like many large corporations, SoftBank invests its cash across a broad portfolio of asset classes. It also invests some of its substantial capital reserves in earlier-stage technology companies. So where does that cash go, and how is it doled out to startups across the globe?

SoftBank is not your typical CVC setup

In most cases, corporate venture capital funds (CVCs) are named after their corporate parents. True to the parental metaphor, most of these CVCs receive an ongoing allowance from their corporate sponsors, with no outside money joining the capital pool. Accordingly, it’s often thought that CVCs are beholden only to the corporation and its strategic initiatives.

This is not necessarily the case with SoftBank’s investment arm. Although SoftBank does invest its own money in startups, and it has been doing so since 1995 under the aegis of SoftBank Capital, a new fund raised by the company’s founder and CEO, Masayoshi Son, blurs the traditional CVC model.

According to research done by the Financial Times, Softbank’s new fund, called the “Vision Fund,” has raised quite a bit of money from partners, including:

According to June 2017 SEC filings, that’s some $93 billion in total. That leaves $7 billion to go to meet a publicly stated target fund size of $100 billion by November 2017, six months after the initial close. Crunchbase News has learned that the fund is intended to be deployed over five years, with anywhere between seven and nine years to mature before distributing assets back to investors.

This mixing of assets from multiple partners — both strategic and not — combined with an unorthodox leveraged financial structure and a decision-making framework that makes Masayoshi Son the final arbiter of deals, to say nothing of the sheer scale of the fund, is unusual.

From an outside perspective, it seems like Son has made a kind of Faustian bargain. SoftBank has partnered with some of the world’s most influential investors in the interest of furthering his 300-year plan to build the largest company on the planet. In doing so, SoftBank runs the very real risk of overwhelming markets for late-stage venture capital, private equity and post-IPO equity deals, which already have a lot of cash chasing relatively few opportunities.

In the following sections, we’ll compare SoftBank’s investing style to other CVC groups, chart the growth of its venture capital and private equity investments over time and discuss some of the challenges SoftBank’s Vision Fund may face over its 12-year cycle.

Even with a unique CVC structure, SoftBank doesn’t break the mold

As mentioned earlier, SoftBank began its corporate venture capital practice — SoftBank Capital — in 1995. It quickly found success with early investments in Yahoo, Alibaba and Huffington Post, among other notable deals.

For a 20-year run between 1995 and 2015, when SoftBank’s then newly appointed president Nikesh Arora made the decision to start winding down SoftBank Capital, SoftBank Capital was one of the top CVC shops around.

Even over the last five years, including the two years where SoftBank Capital was on its way out, the company’s early-stage investing style didn’t meaningfully deviate from other CVCs at leading technology companies. Based on Crunchbase data for 1,200 deals made by SoftBank and four of the other most active corporate venture groups backed by big tech conglomerates, we can see that SoftBank ranks among the most active CVCs. 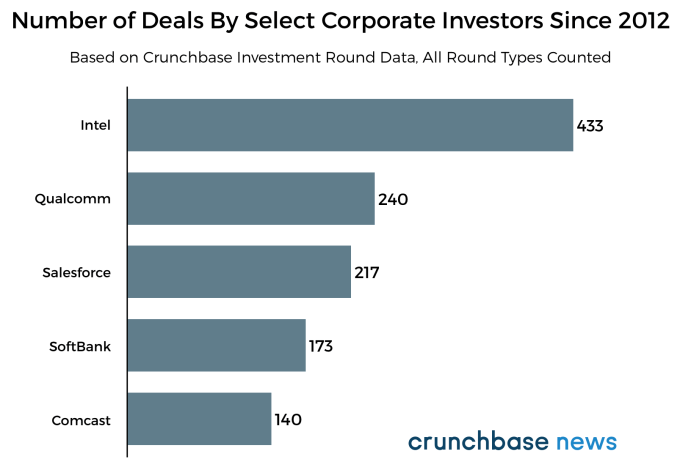 In terms of the rounds that have been publicly surfaced, we can see that SoftBank may not have been the most active CVC. Regardless, it’s in the top 2 percent of corporate investors by VC, private equity, venture debt and post-IPO financing activity overall.

In early-stage, SoftBank was about average

Although SoftBank has lately been swimming in deeper capital pools, its early-stage investing practice hasn’t been all that different from other leaders of the CVC pack. Here’s a chart which averages out 799 Seed, Series A, Series B and Series C deals led or participated in by these top five corporate venture investors between January 2012 and August 2, 2017. 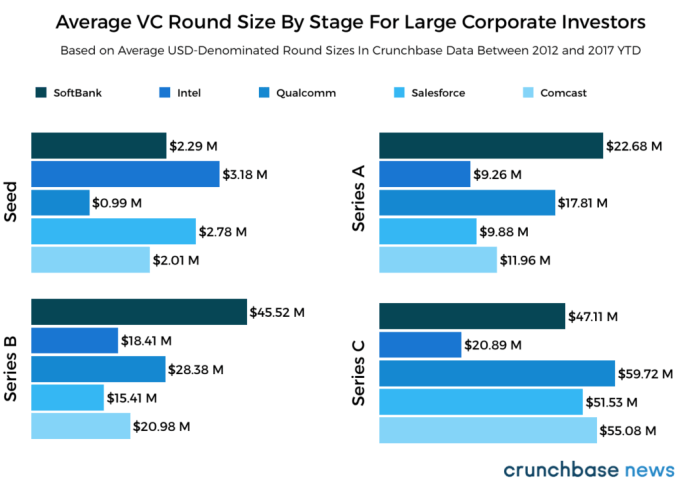 On average, the size of SoftBank’s early-stage venture capital deals were more or less in line with the company’s CVC peers, at least in terms of straight averages.

So, at least for SoftBank’s early-stage investing practice, the firm really was just another garden variety CVC. However, with the decline of SoftBank Capital and the rise of the new Vision Fund, early-stage investments would be “more of the exception than the rule,” Arora told ReCode in an interview announcing the decision.

The Vision Fund is a significant departure from SoftBank’s previous investing style, even when including other CVCs. Although the new $100 billion fund was just announced in the late Spring of 2017, the decision to wind down early-stage venture capital investing was made in 2015. In the same interview with ReCode, Arora suggested that “the way to preserve the long-term sustainability of SoftBank is to be large minority shareholders of many assets.”

And it’s possible to see, in the intervening years between largely ending its early-stage investing initiatives and announcing the Vision Fund, that SoftBank had been busy establishing a track record of playing in what Arora characterized as “the large-check marketplace.” Although it’s hard to know exactly how much capital SoftBank has invested in individual rounds, we can sum the total amount of capital raised in VC and PE rounds in which SoftBank was either a participant or the lead investor. 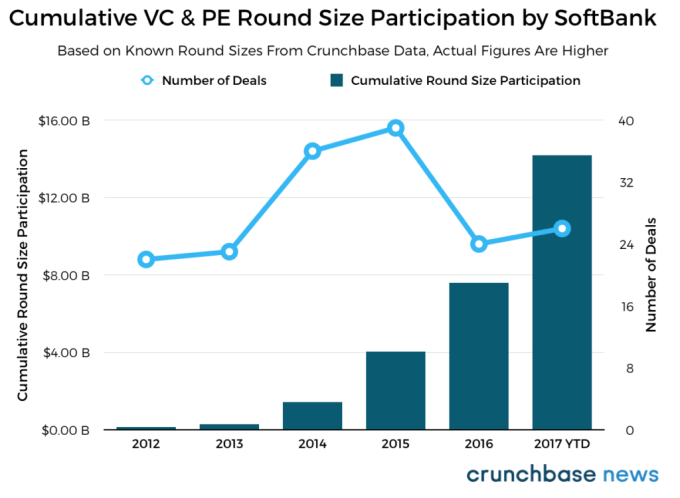 Year-to-date in 2017, SoftBank was a lead or participant in over $14 billion worth of venture capital and private equity rounds alone. This does not account for SoftBank’s $4 billion post-IPO investment in Nvidia in May, any non-PE or VC financings or other funding events that haven’t yet been announced. And given that SoftBank seems to be announcing new deals every week or two these days, the chart above is likely to be out of date very soon. (Update: Softbank didn’t take long to prove us right.)

Visualized a different way, we can see how SoftBank has consistently ramped up the size of checks it’s willing to write. Below is a logarithmically scaled (i.e. by powers of 10) plot of SoftBank’s VC, PE and post-IPO financing events since the beginning of 2012. 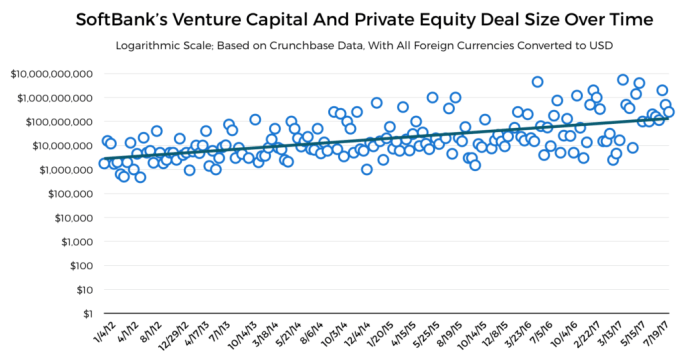 To put this in perspective, in just five short years, the average round in which SoftBank invests has grown by approximately two orders of magnitude, from the low seven figures to the mid-to-upper nine figures.

Deploying $100 billion is harder than it looks

The challenge, of course, is that SoftBank now has to deploy two pools of capital: the Vision Fund and its own corporate cash. Crunchbase News has learned that Vision Fund will be SoftBank’s primary investment vehicle, with preferred access to deals over $100 million. SoftBank declined to comment on the record.

At the time of writing, Crunchbase data shows that, globally, there were just 126 VC, PE and post-IPO equity financing rounds larger than $250 million. (We chose $250 million because it’s a round number and also the amount SoftBank invested in business lending platform Kabbage’s Series F.) In U.S.-based companies, there were just 50 rounds of that size closed in 2016.

Even if the global venture capital and private equity markets continue to recover from their mid-2016 lows, and there are more of these quarter-billion-plus rounds, it’s still going to be difficult to invest that capital judiciously. In a good year, $100 billion is about the size of the entire global VC market. To fill out the rest of the Vision Fund, it’s likely we’re going to see more deals like the $32 billion all-cash buyout of ARM that SoftBank completed in July 2016. As it stands, the Vision Fund now holds 25 percent of ARM, the now $5 billion stake of Nvidia, as well as equity stakes in a few startups financed directly by Vision Fund. It’s also possible that marginal shares of other recent large-dollar investments previously made by SoftBank could be absorbed into Vision Fund.

Arora told Recode the large-check marketplace is “less crowded,” noting that “it’s a smaller universe of companies we have to understand and support.” What he didn’t say, though, was that a constrained universe of big deals is a kind of double-edged sword. This being said, SoftBank shows no indication it’s going to be falling on it anytime soon.