Facility management might not sound like the sexiest use of AI technology. But office space can be a huge expense for larger businesses — the biggest after staff costs — which is why Y Combinator-backed startup, VergeSense, says it’s settled on facility management as the initial target for an AI-powered sensing device it’s been developing since joining the incubator program in May.

Their “sensor as a system” platform, as they dub it, consists of sensing devices containing a series of different sensor hardware, including an image sensor, coupled with a cloud platform for pre-training machine learning models that run on the hardware, process data and report occupancy analysis back to VergeSense’s cloud.

“We’re using really inexpensive hardware… we’ve crammed a bunch of different sensors inside. The core of the product is actually built around computer vision, so we’ve got a really inexpensive image sensor that’s embedded inside,” VergeSense co-founder Dan Ryan tells TechCrunch. “The whole concept around what we’re doing is we’re using machine learning in pre-trained AI modules to do all of processing on the device itself.”

“We’re not streaming a bunch of raw video data back to a cloud service — we’ve pre-trained our models to run on the device themselves,” he adds.

These AI modules can be trained to meet the particular tracking requirement of a customer before being loaded onto the sensor hardware that is sited in the customer’s space. This means processing is done locally, on the device, and only detection results are sent to the cloud where VergeSense customers are able to log in to view the analytics pertaining to their building.

Overall the sales pitch to customers is a system that can passively track how an office space is being used, providing visibility into dynamic multi-occupant, even multi-tenant environments, and making suggestions on how to reallocate resources to make best use of a space.

“Maybe you’ve got an office that’s segmented between a bunch of open office spaces and you’ve got a bunch of conference rooms, but your conference rooms are actually way over-utilized, they’re full all the time, we could inform that building owner that those rooms are being over-utilized and that they need to double down on a room,” explains Ryan.

“Or, in the opposite use-case, we could say you’ve got a conference room that’s designed for 16 people but at max we only get two people using the room… We can make that data available to them and they could split that space into two spaces.” 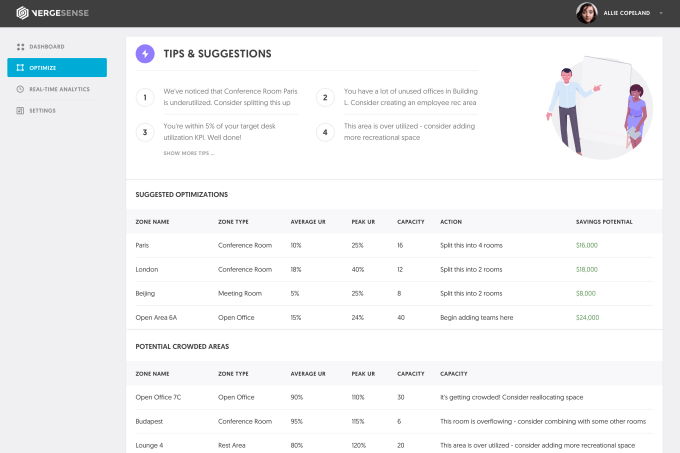 “It sounds like kind of a boring problem, but especially in the Bay Area, the price of real estate being $60/ft a year, on average, if you’ve got a 300sq ft conference room space that’s an $18,000 a year asset, right. Just in that one room. So there’s actually huge savings and efficiencies you can start gleaning by making all that data available to the end-users,” he adds.

As well as an image sensor, the hardware contains a PIR (infrared) motion sensor, audio and RF capability (wi-fi and Bluetooth).

Typically an office space would need one sensor per 1,000sq ft, according to Ryan, although he says this can vary depending on factors such as ceiling height.

At this stage the team has a few “early phase” deployments of their system across some Fortune 500 companies in the Bay Area.

The startup’s first focus is commercial office buildings. And the first application it’s offering is people counting, to power occupancy analytics, though Ryan says the tech could also be used to track lots of other things — for example, specific equipment like photocopiers, or even to hone in on something as specific as desk occupancy or to track usage of specific devices.

He also envisages utility in other verticals in future — such as tracking people and equipment in hospitals or retail environments, for example.

The sensors can either be wired in or battery powered. They can also run on different networks, depending on whether the customer wants them on their corporate network (or indeed on a dedicated IoT network).

Ryan says VergeSense also offers a gateway device that can backhaul over a 2G cellular connection. “We’re not sending a lot of data. It’s a little like text messages, what you can think of in terms of the data we’re sending back — just people counts,” he adds.

From a privacy point of view, as well as local processing, he says all the tracking is anonymous, so VergeSense is not tying analytics to individual identities or otherwise harvesting individual identities. “We’re not getting any personally identifiable information about anybody,” he says. “It’s all anonymous counts — i.e. ‘I saw a person’ or ‘I detected an object here or there’.”

Though he also suggests businesses deploying sensing technology within a multi-occupant environment — where such tech at least runs the risk of being viewed suspiciously — are best being “upfront and honest with the employees at the facility about what the data’s being used for and how it’s being leveraged”. 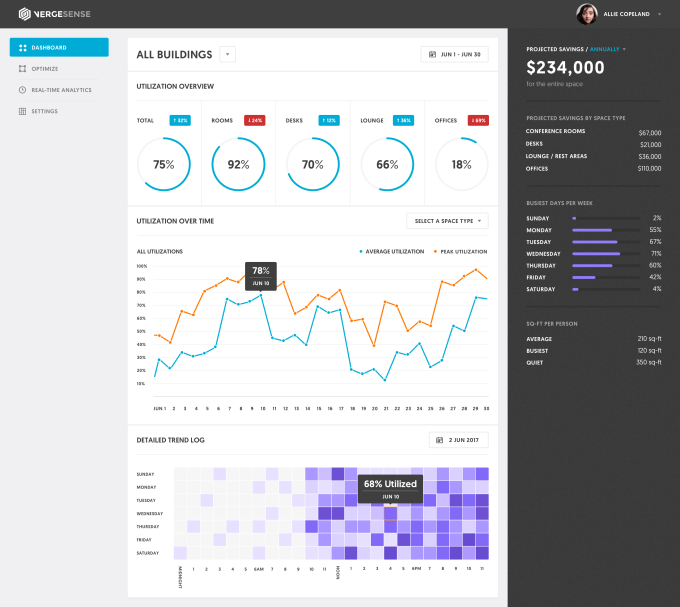 “The core challenge that people are trying to solve with these technologies is managing the space and actually making the employee experience more fulfilling and less frustrating,” he argues. “There’s not really the ‘big brother’ aspect to the technologies — it’s more about how do we just make that data make this workspace more efficient overall.”

And while there are other potential solutions for tracking occupancy and equipment, for example motion sensors or RFID or Bluetooth tags on individual items, Ryan says VergeSense’s advantage is the system allows for a “purely passive approach” to tracking — so there’s no need to manually tag anything, and the system adapts to changes as the models are trained to interpret the environment.

“We haven’t seen many other folks yet with this sort of combination of really inexpensive hardware powered by machine learning,” he says, when asked about the competitive landscape. “I expect to see a lot more competition popping up over the next six months to a year. But I still think the space is pretty early.

“And if you talk to anybody in this space — particular real estate services space utilization — people have been looking for solutions for this for years, literally… And nobody’s really come to the table yet with a solution that’s flexible, simple to deploy yet really, really powerful.”

“We think this combination of machine learning AI on inexpensive hardware… is going to be really powerful and unlock much opportunity,” he adds. “With computer vision you’re just going to have so many different things that you’re going to be able to train the models to detect and report back.”