Not every social messaging player can hope to grow into a mega platform. And Japan’s Line Corporation looks to have reached a peak in user growth — even as it shows it can grow revenue and generate rising profits off of a shrinking user-base.

In its second quarter earnings report, the now public company has posted a quarterly decline in user numbers across its four main markets: Japan, Taiwan, Thailand and Indonesia — reporting 169 million monthly active users for the quarter, down from 171M in Q1 (although it added 2M users in its home market); and up a modest 7.5 per cent year over year. 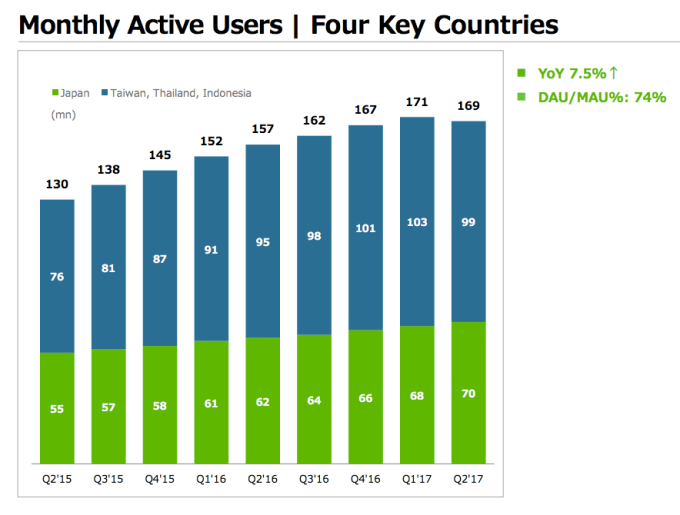 The Japanese market accounted for a full 73 per cent of the company’s revenue.

Line’s revenue growth in the quarter was mostly driven by ads, which accounted for 44 per cent of its revenues, with ad revenue up 38.7 per cent year over year, and 5.7 per cent quarter over quarter. (The next largest segment was content (which includes games), accounting for a quarter of the business revenue.) 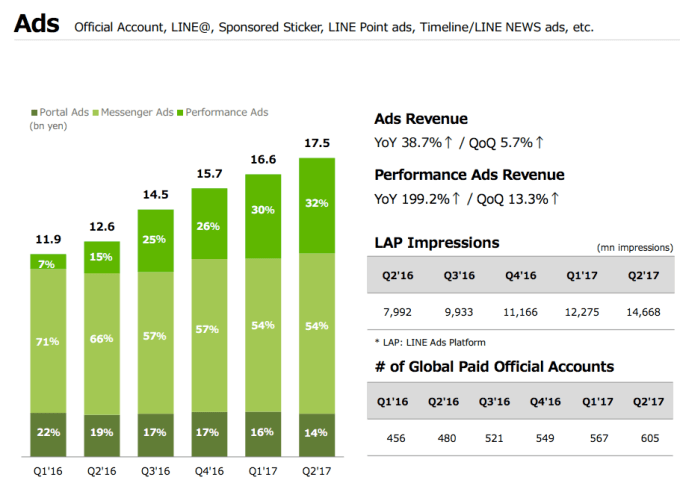 Other portions of its business saw revenue shrink, quarter over quarter, including its comms segment which bundles together paid offering such as sticker sales (which users can buy to send to other Line users) and fees for calls to non-Line users (overall this segment declined 6.4 per cent QoQ, though was up 2.3 per cent YoY). This segment accounted for just under a fifth of total earnings.

Revenue for content sales on Line’s platform, which combines revenue generated from games and other content sales such as music, dropped both year over year, and quarter over quarter, declining 11.5 per cent and 3.5 per cent respectively. (Although revenue for the Line Music service individually was up, and it breaks out one game title that also grew revenue QoQ.)

While an ‘Others’ category, which includes a variety of service offerings, such as a part-time job listings service; Line Pay mobile payments; and an MVNO (mobile virtual network operator) service that Line launched last summer, posted year over year and quarter over quarter growth, recovering from a QoQ dip in Q1. And grew to account for 12 per cent of total revenues. 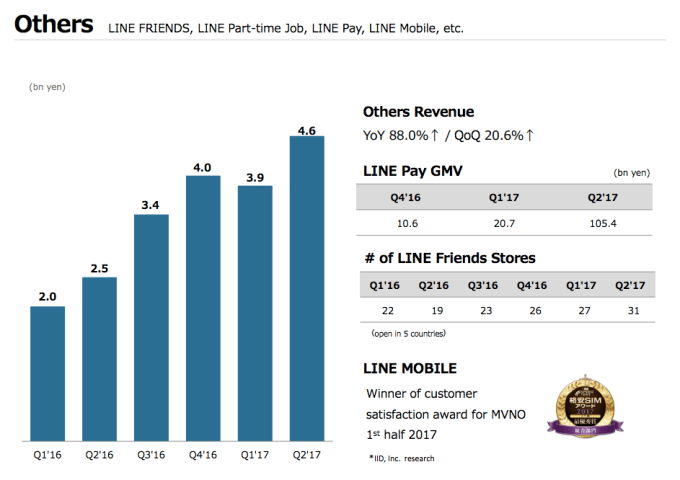 Reporting consolidated earnings for the first six months of the year, Line set its results against a backdrop of economic uncertainty — referencing “the economic policies of the new U.S. administration”. It also noted mobile phone shipments in Japan decreased for the fiscal year ended December 31, 2016.

Though the wider competitive challenge for the business, unremarked in its report, is very evidently scaling a social platform business in a space that’s dominated by messaging giants in both the East and West: namely Tencent’s WeChat, and Facebook’s suite of social platforms, including WhatsApp and Instagram.

Line’s focus on diversifying (and growing) revenue by innovating and expanding its service offerings appears to be its strategy to compete against the challenge of mega platforms, by making the most of its user base (and keeping them engaged with new offerings), though with user growth on its platform at best stalled, if not set for further shrinkage, and its heavy reliance on a single market (Japan) to generate the vast majority of its earnings, it remains to be seen how sustainable this approach will prove.

In its investor forecast for the next quarter, Line says it expects continued “steady growth” in ad revenue, and while it warns over an expected rise in operating expenses for Q3 — as a result of plans to expand its services and marketing activities, as well as “full-scale investments” in its virtual digital assistant tech, Clova (announced back in March — and due to be embodied in a smart speaker, called Wave, launching later this summer), plus new share-based compensation expenses, it says it remains confident of continuing to turn a profit.