Most people hate shopping for insurance, and they don’t enjoy talking about it either. That’s probably why you’re unlikely to hear about the industry’s current transformation in conversation, even in startup circles.

But make no mistake, there are vast sums of venture dollars going into insurance deals. Investment has risen dramatically, with VCs betting that, in the coming years, we’ll see major shifts in both how we buy insurance and what types of items we insure with it.

So far this year, insurance-focused startups (excluding the Asian continent*) have raised more than $700 million, almost as much as they raised in all of 2016, which was itself an especially busy year for the space. Much of the funding boom comes from big insurers themselves, who are backing and leading more rounds for insurance startups, as well as companies in related areas like financial services. In the chart below, we look at funding growth over the past four years: 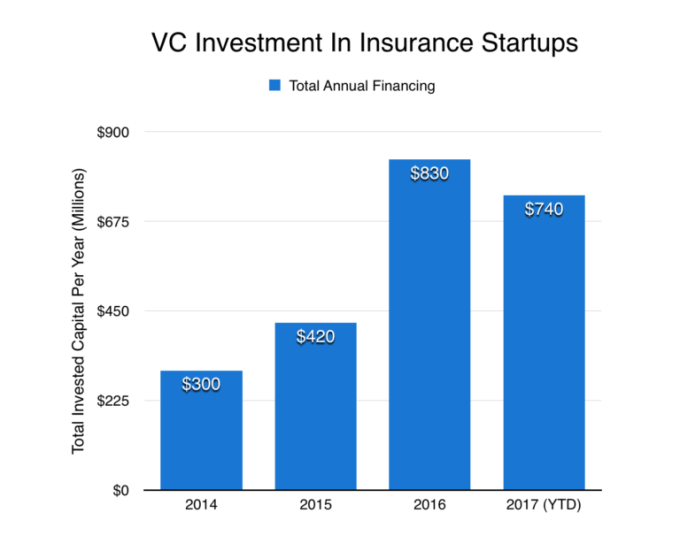 At first blush it may seem like insurance and venture capital make an odd couple.

There are plenty of smaller and mid-sized rounds getting done, too. Over the past year, at least 75 companies in the insurance space have raised rounds of $1 million or more, and about a quarter of those were for $20 million or more. They cover a big range of business models, as well, including new insurance categories, online platforms for comparing and purchasing coverage and tools for providers to better assess risk.

One might be inclined to call these startups industry disruptors — except that their biggest supporters seem to be long-established players in the space.

As mentioned, a sizeable chunk of the financing comes from insurance companies themselves, many of whom have dedicated venture arms. The most active by round count looks to be AXA Strategic Ventures, the VC arm of French multinational insurer AXA. The two-year-old fund has invested in two dozen companies over the past two years, including a $6.5 million round it led this month for QLoo, a celebrity-backed developer of AI-powered tools for mapping cultural tastes. MassMutual Ventures, the VC arm of insurance giant MassMutual, has also been keeping busy, backing 16 companies over the past three years. In the chart below we look at a few:

Well-known venture firms are also leading significant rounds. New Enterprise Associates, for instance, backed both Metromile and Bright Health, along with Indio, a seed-stage commercial insurance startup. Accel and Bessemer have also each made three insurance-focused investments in the past couple of years. And over the years, most of the biggest Silicon Valley firms have at least one investment in the space.

But while it looks like large sums are going into insurance deals, the figures may underestimate the breadth of activity. One reason is that many fast-growing players in the insurance space operate in other industries too, such as financial services. A case in point is Credit Karma, the credit score unicorn that now offers auto insurance quotes alongside offers for credit cards and other financial products.

In small allocations, however, venture can actually be a strategy for reducing risk, as it allows large, entrenched players to track and take stakes in the upstart ventures that could reshape their industries. It’s worth noting that many of today’s largest insurance companies have histories that date back a couple of centuries. They didn’t  last this long without some ability to adapt to changing times.

* Crunchbase’s tally of insurance investment totals excluded Asia, which sees fewer deals but some large ones. The biggest to date is Zhong An, a China-based online insurance company that raised more than $900 million two years ago.